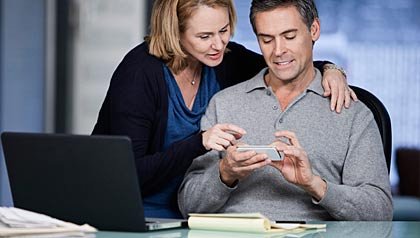 Product by product, Samsung is proving that it is following principles of universal design, making products that are designed for everyone to use.

It is a Tuesday night, less than 48 hours before the Microsoft launch of Windows 8 and its Surface tablet in New York. It is a week full of announcement parties for Windows 8 computers, tablets and laptops. But on this night the spotlight is on a Samsung phone. Literally. The huge event searchlights are aimed at New York’s old post office building, a monstrous edifice that takes up an entire city block. It is being converted to Moynihan Station, an effort to restore the glory that was once the old Pennsylvania Station. Now, a portion of the building has been converted into a cavernous event space, and the media is lined up on 33rd Street waiting to look at still another smartphone from the world’s largest maker of consumer electronics.

Samsung is promoting the Galaxy Note II as the “Next Big Thing.” And they are right, at least in terms of phone size. This one has an immense 5.5” diagonal screen. It is the first Android phone that allows you to make the icons bigger. It has a stylus to let you take handwritten notes and convert them into text. And it may well be the most boomer/senior friendly smartphone yet. But you won’t catch Samsung saying that. That’s not their message. But product by product, the Korean company is proving that it is following principles of universal design, making products that are designed for everyone to use.

As you look at the company’s current product offerings, two themes emerge. One is the notion of making products that (almost) every demographic can use. Another is connectivity. Besides its Galaxy Note II, Samsung has its Note 10.1-inch Android tablet, with the same “S” pen technology as the new phone. But because it’s bigger, you can use the tablet to draw, make notes on pictures, websites or documents, and share them. It also has a pretty decent (though a long way from perfect) handwriting recognition program.

Back to the Future

One of Samsung’s newest products does look like it was designed for boomers and seniors. It’s a well-crafted audio dock, one version done in a handsome cherrywood cabinet. What takes it back to the future is that the amplifier uses vacuum tubes. Why? Because after all these years audio engineers have concluded that tubes deliver a purer sound than transistors. The DA-E750 Audio Dock works with Apple’s iPhone as well as a number of Samsung phones. It comes with Bluetooth connectivity, as well as connections for several wireless music-playing systems including Samsung’s AllShare and SoundShare and Apple’s AirPlay.

But with hundreds of products, it’s almost impossible to design them all for all users. For example Samsung’s HMX-QF20BN camcorder can be switched from right-handed to left-handed operation. But because it’s so compact, the on-screen controls and icons may be difficult to see for those who are visually challenged.

The chances are that in at least one room in your home a television is the room’s centerpiece. That’s one big reason Samsung is bringing its messages of connectivity and universal design to its SmartTV series. These sets allow the user to select functions, adjust volume and change channels using either voice or gestures. According to a couple of sales clerks from Best Buy I spoke with, customers say their experience with the voice recognition has been pretty good, but the gestures still need work. That was my experience as well. When I said, “Hi, TV”, it responded to my voice commands. But on three out of four tries with the gestures, I would wave, and it would wave back. And nothing more.

But Tim Baxter, the president of Samsung Electronics America, feels this is just the beginning: “Gesture is really starting to emerge ... in many of our televisions we’ve combined Skype and gestures to make it easy for older adults to stay connected with families and friends, without needing a computer. They want to stay connected and we have to make it easy. The television is known as an easy interface, and Skype makes it easy to call grandkids. When you can see that in a 55-inch TV, that’s very compelling.”

Baxter says the Smart TV also becomes a way of integrating lots of programs besides just the offerings from your cable provider: “Streaming Netflix and other programs are still the most prevalent and they are front and center in our strategy. But Smart TV goes beyond that and includes connecting five or six different input devices, which appeals very well to the boomer and senior crowd. You can also use a big screen tablet to see the programs and have it work as a remote control.”

Next: Too many devices to count. »

Product by product, Samsung is proving that it is following principles of universal design, making products that are designed for everyone to use.

Baxter says that Samsung is paying attention to the demographics. “On the broadest level Samsung all around the world is focused on where are the trends, the population segments that are growing, what are the consumer needs,” he says. “If I look at boomers and the active adult community in terms of digital cameras and HDTV, what do we find if we look at trends at the macro level, then peel that back?”

Connectivity is the reason many of its new devices come equipped with Wi-Fi capabilities. Says Baxter, “it’s less about productivity in a traditional sense, and more in terms of wanting to stay connected with family and friends .... That extends to our phones, our cameras, our TVs. We ask, ‘How can I connect with friends and use media differently?’”

Too Many to Count

Samsung makes just about any kind of consumer electronics device you can imagine, including computers, cameras, tablets and mobile phones. But Samsung has also become a major player in the appliance industry. And there too Baxter says Samsung is trying to introduce connectivity, “Appliances, smart appliances, are becoming a major focus for us, refrigerators with an LCD screen, a calendar and Wi-Fi capability appeal to the boomer population as well. Put in LED lighting to see what’s in a refrigerator with 32-cubic-foot capacity. An LCD refrigerator with apps like Grocery Manager, that will allow me to track expiration dates.”

Connectivity and simplicity are also behind Samsung’s decision to manufacture the Google Chromebook, a device that uses Google’s Chrome browser instead of an operating system. “Chromebooks have easy connections. There are no worries about viruses. These types of products address anxiety.”

In Tim Baxter’s world, connectivity will know virtually no bounds. He says, “We think we’re really on the cusp of being able to integrate it all. The average U.S. family has 32 consumer electronic devices; only a handful have connectivity. That’s why we are launching AllShare, a cloud-based utility.”

Right now the service will allow you to share music, photos and videos. But eventually you may be able to program your television, start the washing machine and even track what’s in your refrigerator. Will boomer and seniors benefit from this kind of connectivity? Baxter thinks all consumers will come to expect it, and boomers and seniors will find their needs served by being along for the ride.

"See Me, Hear Me” is a continuing series examining whether major players in the consumer electronics industry are meeting the needs of boomers and seniors.

Visit the AARP home page for tech news and reviews