At this year’s annual Consumer Electronics Show in Las Vegas, Verizon, the nation’s largest wireless carrier, was showing off more than just smartphones and tablet computers. Verizon unveiled new devices and services being developed for seniors and boomers to operate on Verizon’s 4G high-speed wireless network. One of the most practical is a small, wearable GPS device called the “SureResponse” system. It takes the notion of “Please help me, I’ve fallen and I can’t get up“ to a new level. This one-button device connects to a response center either over the cellular network or through your home phone line. It can be worn as a pendant, a wristwatch or on a belt clip. In short, it works almost anywhere. We’ve heard stories of seniors who went out for a short drive and got lost. By using this device, the SureResponse agent can see the location and give directions to get home, or, if necessary, contact a caregiver or emergency responder. 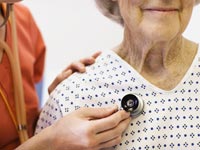 Verizon offers a substantial range of products and services to meet the needs of an aging population.

Another third party making devices to run on Verizon’s network is HealthSense. The company’s “eNeighbor” system can be professionally installed in a senior’s home or assisted living facility. It has a series of custom sensors that can be used on doors, beds or in the bathroom to alert caregivers if someone walks through the wrong door, falls out of bed or even missed taking a medication.

Praveen Atreya, director of Verizon’s LTE Innovation Center, points to other technologies, such as a device from BL Healthcare that comes in the form of either a set-top box or a tablet computer. Its primary purpose is to minimize hospital admissions and hospital stays by monitoring chronic populations such as those with congestive heart failure or diabetics. The devices can securely communicate with a caregiver, or a health care professional, and if there’s an indication something is outside of normal parameters, they can arrange a video conference to walk through what needs to be done.

Verizon Wireless says it offers a substantial range of products and services to meet the needs of an aging population. Most of these can be found by visiting the Verizon accessibility website, www.verizonwireless.com/accessibility. In addition, Verizon has a special center for customers with disabilities staffed by trained consultants who can deal with vision, hearing, speech, cognitive or mobility limitations. Center consultants can also help with local phone service, long distance/toll plans, directory listings, calling services, billing questions, Braille or large print bills, and high-speed Internet service. The company offers pricing plans to make many of these services more affordable for seniors, including free 411 calling for the visually impaired and special plans for those who cannot use voice services but do need to text or use Video Relay Service to communicate. But, as with many companies in consumer electronics, it’s up to the consumer to ask about these services, or dig into the website to find them.

Many of these steps are actually mandated by the government. Barbara Kaplan, the marketing manager for Verizon’s disabilities area, says they are spelled out in a group of FCC rules known as Section 255. In short, they specify that telecom companies must make their products and services accessible to people with disabilities, and make it easy for users to find out about these features. Kaplan says that as part of the process, Verizon meets with handset and software makers months before a new phone is launched to make sure the devices meet the FCC standards. But she admits that’s not always easy. For example, there is no one set of accessibility standards for the Android Operating System, and ease of finding them varies among Android devices. Apple’s iPhone and iPad have an accessibility tab on the “Settings” page. She says the company goes through the same process for Windows Phone and BlackBerry devices.

To meet the standards, Kaplan says every “front facing” Verizon employee, whether at a call center or in a Verizon company-owned store, receives mandatory accessibility training that covers all of Verizon’s current products.

But the FCC requirements don’t really cover issues of universal design, making all devices easily usable by all consumers. Verizon says, “We have a requirements process for all our devices that cover a wide range of hardware and software specs, including accessibility features.” Verizon didn’t provide any specifics of that process, only to add, “suffice to say Verizon has always offered a wide range of devices, with various customer segments in mind, and with various features. It’s fair to say that we always want the user experience to be a good one, and do what we can to make that happen right out of the box.”

Next: Looking to the future. »

Putting Verizon outlets to the test

Verizon sells its phones and plans through a variety of outlets in addition to its online store and its company-owned stores. You can find Verizon’s phones at Walmart, Best Buy and Radio Shack, among others. You can also find them at “Verizon Wireless Zone” stores, which are a franchise chain, not owned by Verizon. To the untrained eye, it’s tough to tell these Wireless Zone stores apart from the Verizon company-owned stores, but there is a world of difference. Not too far from my home a Wireless Zone store is just a few hundred yards away from a Verizon corporate store. The Zone store had one sales clerk at work in a relatively modest space. I saw no fewer than eight people working in the Verizon store just down the block that was at least five times the size. But the differences don’t stop there. One of my long-standing frustrations with smartphones has been the small print under the icons on the home screen. I asked the sales clerk at the Zone store if there was any way to make the icons on an iPhone larger, and he had no idea. I drove down the street to the Verizon store and asked the same question. The sales clerk didn’t know, but he immediately turned the question over to a technician who drilled down into the iPhone settings and in short order showed me how to do a three-fingered tap to zoom in on the icons.

When we asked about some of Verizon’s full-featured phones with senior friendly features, both the Wireless Zone and Verizon store sales clerks pointed us to the Samsung Gusto II, which has large text, relatively big buttons and voice-enabled functions that could be a big help to those with less-than-perfect eyesight. Verizon says it offers training to its third party sellers, but it’s not mandatory.

Looking to the future

Praveen Atreya of Verizon’s LTE Innovation Center says we can expect to see even more services and devices linked to the 4G network. He points to the smart grid, and how monitors could detect changes in the use of electrical appliances by seniors, a potential early warning sign that something in a senior’s behavior pattern has changed. Or we may see devices tied to public transit that could provide information on whether a train is running late. All of this sounds wonderful, but while Verizon’s goal is to continue to rule the air, whether in Braille or large type or through voice recognition, my goal is just to figure out my Verizon bill.