Earth Day reminds us to appreciate our global home,
to assess its health and how it is changing — then consider simple ways to protect it. Here is a 50-point tour of Earth facts, tips and advice. 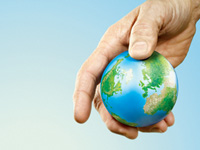 Our Stomping Grounds
1. The planet is 4.5 billion years old.
2. Global warming followed each of several ice ages starting in the Precambrian time more than 600 million years ago.
3. 1.75 million years ago, ice covered all of Europe and most of North America.
4. 18,000 years ago, winter temperatures were 27 to 36 degrees cooler. Ice Age Florida was like Quebec.
5. As the India tectonic plate pressures the Eurasian plate, Mount Everest is rising at 3 cm. a year.
6. Earth tilts 23.5 degrees on its axis, causing our seasonal weather variations.
7. More than 11 million species live on the planet.
8. Humans have named about 1.7 million.
9. Oceans cover 70% of Earth’s surface.
10. Forests harbor 80% of Earth’s biodiversity.

Next: What you can do to protect the Earth. >>

Steps in the Right Direction
33. The ozone hole is at its smallest since 2004, due to reduced chlorofluorocarbon usage.
34. It is predicted to disappear altogether by 2050.
35. The average American accounted for 17.7 metric tons of carbon dioxide in 2009, down from 20.3 metric tons in 2005 (although still 4 times the world average).
36. Soot reduction, easy and cheap to do, could halt warming enough to preserve Earth’s polar ice cap.
37. Since 2001, the bald eagle and nine other U.S. wildlife species have bounced back from endangered status.
38. U.S. investment in solar power lowered the cost of clean, renewable energy.
39. Offshore wind farms: same story.
40. Biofuel could soon be used in jets fitted to fly on this lower-carbon source.

Easy Ways to Tread Lightly
41. Buy better meat but less often. Opting for cuts from sustainably raised animals and decreasing meat consumption will ease environmental stress.
42. Set your water heater at 120 degrees. Many are set to 140 degrees, which is both wasteful and hazardous.
43. Use your wood-burning stove or fireplace only on special occasions; the smoke pollutes both inside and outside air.
44. Reduce your time in the shower by 5 minutes and save 25 gallons of water a day.
45. Loading dirty dishes without rinsing saves up to 20 gallons of water per dishwasher load.
46. Add native plants to your garden; they need less water and fertilizer.
48. If rain is coming, don’t water or fertilize your
garden. Water will go to waste and fertilizer will travel down storm drains, polluting waterways.
49. Bank online to save paper. You’ll do it once then wonder what took you so long.
50. Check out the Department of Energy’s tips on maximizing energy efficiency while saving money: Go to energysavers.gov.