The new term of the U.S. Supreme Court, which begins today, could be a blockbuster, with the court likely taking up the constitutionality of President Obama's health care reform law.

See also: Who are the justices on the Supreme Court? 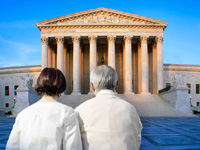 The high court will decide issues relevant to older adults.

"This issue may precipitate the most important clash between the court and the executive branch since the New Deal," according to an AARP Foundation Litigation analysis. "The court's opinion may impact jurisprudence and the direction of this country for decades to come."

The court has accepted a little more than half the cases it will hear during the term. On the docket so far are cases involving Medicaid, consumer credit rights, biomedical patents and other topics with special significance for people 50-plus.

Legality of the health care law

The court has not yet agreed to hear one of the challenges to the Affordable Care Act making their way through the courts, but five federal appellate courts have issued contradictory decisions. The high court will need to settle the matter.

The court could grant review in Thomas More Law Center v. Obama from the 6th Circuit Court of Appeals, which upheld the so-called individual mandate requiring individuals to buy insurance by 2014 or pay a penalty.

The court could also choose a more prominent case, namely Florida v. U.S. Department of Health and Human Services from the 11th Circuit, which held the individual mandate was unconstitutional. The Obama administration signaled Sept. 26 that it wants to move this case along when it didn't ask for another review by the 11th Circuit, increasing the chances the Supreme Court could get the case more quickly. Florida v. HHS was brought by mostly Republican attorneys general and governors in 26 states, the National Federation of Independent Business and two individuals. The court received petitions for review on Sept. 28 from the state officials, the NFIB and the Obama administration.

A central issue is whether Congress overstepped its constitutional authority with the individual mandate. The law also greatly expands Medicaid and contains measures to help older people live independently rather than in institutions.

If the court accepts a case by January, it is expected to rule by the end of the term in June 2012 — right in the middle of the presidential and congressional campaign season.

The issue may sound technical, but Douglas v. Independent Living Center has major implications for poor people who receive health care through Medicaid and for states facing budget crises. Thirty states have joined California in arguing that the providers and patients should not have the right to sue. The states claim it would be a "financial catastrophe" to be forced to comply with federal law blocking the reimbursement cuts.

In 2008, the California legislature approved a 10 percent cut in reimbursements for dentists, health clinics, pharmacists and other providers. Several provider groups sued, saying the lower rates would hurt patients. Some pharmacies, for example, refused to dispense drugs below cost. When federal courts blocked the cuts from taking effect, California appealed to the Supreme Court.

A consumer's day in court

In CompuCredit v. Greenwood, the question is whether a business that provides consumers with a "you have a right to sue" notice under the Credit Repair Organizations Act actually has to let consumers go to court — or if arbitration is a good enough substitute.

CompuCredit Corp. marketed a credit card it said would help rebuild a customer's credit. Consumers supposedly could get the card free but first were charged $257 in fees, which was mentioned in small print.

Wanda Greenwood and other plaintiffs filed a class action lawsuit in California alleging the company violated the credit repair law, which gives consumers a right to sue. The company tried to compel arbitration instead. Greenwood and others filed an appeal, and the 9th Circuit Court of Appeals sided with them. CompuCredit appealed to the Supreme Court.

Consumers need their day in court, says Bobroff, whose law center joined AARP in filing a friend-of-the-court brief on behalf of consumers.

"Arbitration doesn't provide the same protection as a judge and jury," she said.

The risk to older people is great because without active income, seniors often have trouble restoring their credit. This can lead to foreclosure and other problems, she said.

Oral arguments are scheduled for Oct. 11.

Prometheus developed a method to analyze blood tests to determine how a patient is reacting to certain amounts of a drug. They hold two patents, and when Mayo, a for-profit division of the Mayo Clinic, developed a test that also measured a patient's reaction to dose levels, Prometheus filed a patent infringement suit.

Mayo claims that no patent should cover a doctor's observations on how a patient reacts to certain dosages of medicine, which they describe as a "natural phenomenon," and patenting the process would stifle normal medical practice.

"No one may seek or get a patent based on a law of nature, so if an apple fell on your head and you wanted to patent a law of gravity, you are out of luck," said attorney Miguel A. Estrada, a former assistant to the solicitor general who argued the case previously before the court.

This is the Supreme Court's second crack at the issues, after remanding the case back to federal circuit court. AARP is among groups that have weighed in on the case, urging the court to rule that the tests are not patentable.

Marsha Mercer is a freelance writer who covers public policy issues. She is based in Virginia.

New York Times v. Sullivan (1963.) Listen
The First Amendment protects published statements about the conduct of public officials, even if they are false, except when made with actual malice.

Miranda v. Arizona (1965.) Listen
Police must inform citizens accused of a crime their rights to "due process," including the right to remain silent and have an attorney present.

New York Times v. United States (1970.) Listen
The Court said the Nixon Administration did not make its case to overcome prior restraint of the press and allowed the New York Times and The Washington Post to publish what became known as the "Pentagon Papers."

Roe v. Wade (1973.) Listen
A woman has a right to have an abortion within the first trimester.

United States v. Nixon (1974.) Listen
The court said President Richard Nixon could not use "executive privilege" to prevent releasing audio tapes of conversations recorded in the Oval Office in connection with the Watergate affair.