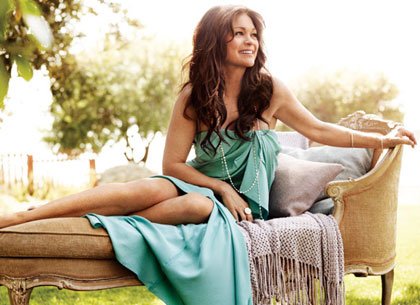 Valerie Bertinelli strides purposefully toward the front desk of a Los Angeles hotel, where she's scheduled to speak at a fashion show the following morning. Her long auburn hair is feathered in a sassy shag, and she's wearing a short-sleeved, black mock turtleneck, formfitting flared jeans, and a pair of sky-high heels. She checks in, then says cheerfully, "I had a massage scheduled this evening, but I need to cancel it. I have to work out instead.… Oh, and which way is the restaurant? I'm starving!"

On this particular day Bertinelli is a month away from turning 50, and the view from behind her tortoiseshell reading glasses is none too shabby. The actress—still best known as Bonnie Franklin's TV daughter Barbara in the 1970s sitcom One Day at a Time—has just returned from ten days in Italy, where, on a romantic night in Florence, her boyfriend of nearly six years, businessman Tom Vitale, surprised her by proposing marriage.

"We'd talked about getting married," Bertinelli says, "but I was still shocked. It was sweet when he asked me, because he was so scared. I was like, 'Are you kidding me?' "

Bertinelli met Vitale, who runs a private equity fund, in 2004, when she was carrying 162 pounds on her petite, five-foot-four frame. In early 2007, after she'd ballooned to 172 pounds, she launched a very public weight-loss campaign with the Jenny Craig company, dropping more than 40 pounds. Not only has she kept the weight off, but her zest for exercise has led her to set increasingly challenging fitness goals. She completed the 26.2-mile Boston Marathon in April in 5 hours, 14 minutes, and she's planning to compete in a triathlon later this year. In between she'll be filming her new TV Land sitcom Hot in Cleveland, costarring Jane Leeves, Wendie Malick, and Betty White. Oh, and then there's that wedding, scheduled for this fall. She's leaving the planning up to Vitale. "He already knows the different kinds of  bells he wants to go off during the ceremony," she says.

Although details for the big day are a secret, one thing is clear: Bertinelli is enjoying every minute leading up to it. At the hotel restaurant, she orders a crab salad. As for the glass of Champagne she's sipping, she says, "It'll be out of my system by the time I get on the treadmill tonight." She shows off the Bodybugg device on her upper arm, which tracks calories she burns. Acknowledging that completing a marathon on the eve of her 50th birthday is no small feat, she sits back, laughs deeply, and says, "I've never been a big age person. I've got the lines. I'm aging. But so what? Now is the best time of my life. Oh, hell yeah! I hope it just gets better, because this is really fun."

Life was far less rosy back in 2001. That's when Bertinelli discovered that her husband of two decades, rocker Eddie Van Halen, had boarded a plane with their young son, Wolfie, while carrying a packet of cocaine in his wallet. Soon after, the couple separated. In 2003 Bertinelli was spending most of her time in Salt Lake City, filming her CBS series Touched by an Angel (co-starring Roma Downey and Della Reese). When 12-year-old Wolfie wasn't in school, he stayed with her in Utah, and she commuted to Los Angeles to visit him whenever the production schedule permitted. Still, the visits were never frequent enough, and she was lonely. Angel was on its way to cancellation that year, and Bertinelli's TV-movie options—a big part of her adult career—had dried up. As she often did in times of stress, she turned to food. Jalapeño-and-cheese poppers, to be exact: each night she'd come home from the set, heat up a dozen, and pour herself a vodka and cranberry juice.

"After Ed and I separated, I thought, 'I'll finish raising my son, and I'll go away, have about 40 cats, and just get nice and fat.' I thought I would be alone for the rest of my life, because I didn't want the responsibility. Relationships are too hard." (Bertinelli's divorce from Van Halen was finalized in 2007.) She can't recall exactly when she decided to take charge of her life. "I don't believe there's just one turning point," she says. "Things add up."

"Valerie is a very strong woman," says celebrity chef Rachael Ray, a close friend. "She pulled herself up from a tough place and came back swinging."

It helped immeasurably that along the way she met Vitale. She credits him with "breaking her open"—but says by then she was ready for a new love. "If my life wasn't starting to turn around, I couldn't have welcomed him into it."

Bertinelli's brother Patrick, who lives in Scottsdale, introduced Valerie to his friend Vitale in 2004, during one of her visits to her parents, who also live in Arizona. Vitale, the father of four children now ages 11 to 19, was recently divorced. "Val and I were coming from a tough time and wanting to move on but didn't want to trust anyone," he says. The two bonded initially over their similar heritages. Bertinelli's father is Italian; Vitale is Italian-Sicilian. "We just understood each other completely," Vitale says. "My family is her family. It wasn't love at first sight; it was family at first sight."

Bertinelli says her weight was never an issue for Vitale. "I've never felt more beautiful at any weight than when Tom looks at me. He loved me no matter what. In his way, he's teaching me to love myself just as I am."

Acceptance from the person you love is a wonderful thing—but not a cure-all. In early 2006, Bertinelli began complaining of knee pain and found herself winded. Jenny Craig soon came calling, and the timing was perfect. Bertinelli signed on with the weight-loss company, dropped to less than 130 pounds, and wrote a book about it. Then came the task of maintaining the loss. Initially she walked for exercise, but in 2008 she hired a personal trainer with the goal of getting into bikini shape. The following July, she completed a half marathon in Sonoma in an impressive 2 hours, 13 minutes. She beat Vitale, who ran the event with her, by 8 minutes. "And he's 16 months younger than I am." Bertinelli jokes: "I tell him I'm a year-and-a-half smarter."

In 2005 Vitale and his oldest son, Tony, now 19, moved into Bertinelli's Malibu beachfront home. His three younger children often come for visits, allowing Bertinelli to master the art of blending families. "It's not easy," she admits with a laugh. "I'm looking forward to being an empty nester."

Vitale, who was once ordained a nondenom­inational minister, has helped Catholic-raised Bertinelli tap into her spiritual side. "I believe in the whole karma thing—sowing and reaping," Vitale says. "We try to plant good stuff every day." To that end, Bertinelli made peace with Van Halen, who went into rehab and is now, she says, "a terrific dad." She allowed Wolfie, currently 19 and a "brilliant musician"—he plays guitar, piano, bass, and drums—to tour with his father in 2007. And she and Vitale attended Van Halen's 2009 wedding (complete with a nonalcoholic bar) to stuntwoman Janie Liszewski.

Reconciliation and acceptance have become part of Bertinelli's philosophy of maintenance, something she explored in her second book, Finding It: And Satisfying My Hunger for Life Without Opening the Fridge, released late last year. She's also adopted a much more positive approach, especially when it comes to her view of herself. Says Bertinelli: "I don't want to believe the bad stuff anymore. I believe that I'm worth having a beautiful, blessed life. Every day, I thank God for it."

Life's blessings were most certainly on display in Italy, a place neither Bertinelli nor Vitale had visited. "Oh my God, what the heck took me so long to go?" Bertinelli says now.

Of course, the surprise engagement was the highlight. One night, back in their Florence hotel room after dinner at the city's oldest restaurant, Ristorante Buca Lapi, Vitale slipped a platinum wedding band engraved with Romanesque flourishes onto Bertinelli's finger and proposed. "If the time wasn't right, I wouldn't have asked," Vitale says. "We're both still a little afraid of commitment, but then we were over there, and it was like our souls were calibrated."

"I've never had a male friend like I have with Tom," says Bertinelli. "Mature love doesn't mean you have to be mature all the time—we definitely have our immature moments. But when disagreements come up, we're able to talk in a way that's not attacking, and we'll still love one another."

Now Bertinelli has a wedding to look forward to, and, more immediately, that new sitcom. It follows three middle-aged Los Angeles women who accidentally end up in Ohio and stay awhile when they discover they are, as the title suggests, hot in Cleveland. Both the casting and the plot reflect Bertinelli's belief that "women of this age are not dead. We're part of the baby boomers. We're big, man!

"You know what's so great about being this age?" Bertinelli says. "We're smarter. And we're not too old to grow. When I was Wolfie's age, my mom would try to tell me something, and I was like, 'She doesn't know what she's talking about.'

"God, she so knew what she was talking about!"