(Video) Eye in the Sky Movie Trailer: Complications arise when a lieutenant general (Alan Rickman) and a colonel (Helen Mirren) order a drone missile strike to take out a group of terrorists in Nairobi, Kenya.

En español |  A tense war-room drama that tries valiantly to boil down the issue of remote-controlled warfare to a single hypothetical case, Eye in the Sky consists mostly of big-name stars squinting at video monitors and saying, in effect: "Can we shoot now? How about now? OK, how about now?"

Given that the stars include Helen Mirren and the late Alan Rickman as high-ranking British military officers, Breaking Bad alum Aaron Paul as a U.S. drone pilot and Oscar nominee Barkhad Abdi (Captain Phillips) as a field operative, the quality of those squinting eyes is first rate. But the film presents a premise that, in the end, it cannot quite hold up: that killing people from 3,000 miles away somehow embodies greater moral complexity than doing so face to face.

At the outset, Col. Katherine Powell (Mirren) strides into her command center with a monumental but relatively simple task on her slate for the day: Her drone force, operating over Kenya, is to provide visual cover as a Kenyan military team storms a hideout where a number of terrorist baddies are plotting the imminent murder of scores of people. No one is supposed to get hurt in the raid — but of course things go south rather quickly, and soon Powell must decide whether to use deadly force from on high as plan B.

The decision would be easier if it weren't for a young girl the drone cameras spot selling bread from a table right outside the villains' lair; she's blissfully unaware that a Hellfire missile is aimed at a spot 10 feet behind her head. The dilemma — do you sacrifice one innocent life in order to save scores of others? — sparks bitter disagreements in conference rooms around the globe as British, U.S. and Kenyan allies fret about the political and propaganda implications of their actions. 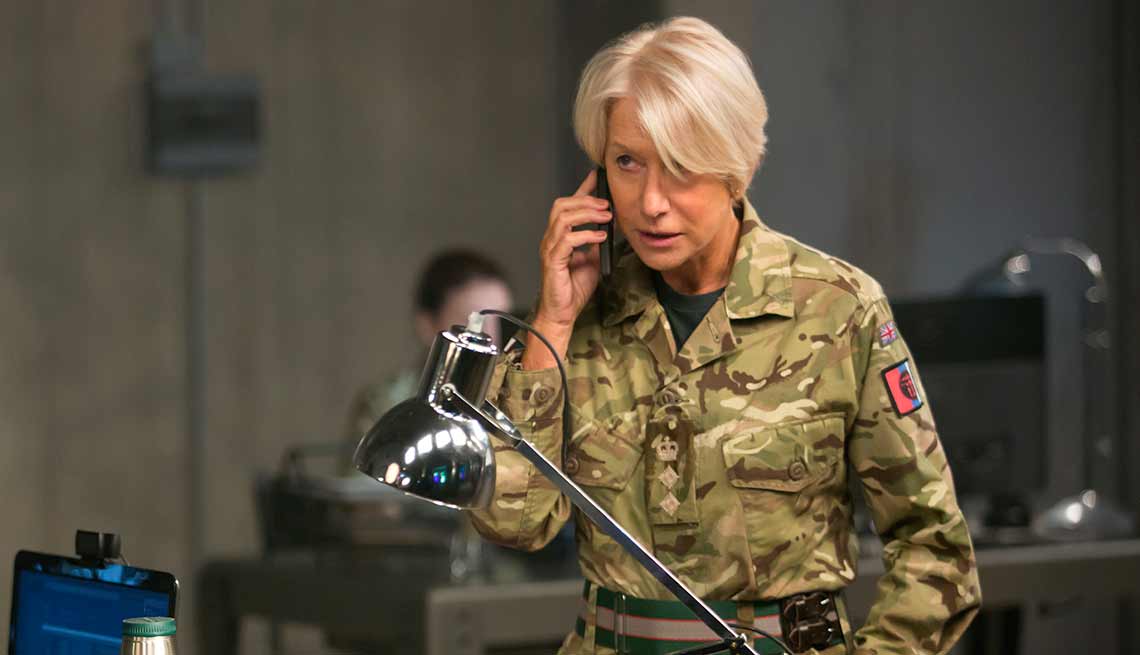 Helen Mirren stars in 'Eye in the Sky.'

The anguished debates at times make the script — penned by acclaimed British TV writer Guy Hibbert — sound like "Aaron Sorkin lite." But no matter how often Mirren cocks her head to one side — hoping, perhaps, that a different angle will clarify what she's seeing on her video screen — the basic truth about war remains the same: It is rife with ugly decisions and horrific outcomes. (Just ask Harry Truman.)

When writer-director Andrew Niccol tackled the drone-warfare issue in Good Kill (2014), the film got five stars here; we were galvanized by its unnerving depiction of a drone pilot (Ethan Hawke) who unleashes remote attacks with clinical detachment from a trailer in the Nevada desert, then heads home to a Las Vegas suburb only to suffer his own daily attacks — of post-traumatic stress disorder.

The drone pilots in Eye in the Sky work from the selfsame trailer farm where Hawke toiled. (Indeed, the sets are so similar — and apparently so authentic — that I half expected to see Hawke amble out of the break room.) Here, though, the pilots agonize over every trigger pull; tears stream down their faces as they await the shoot/don't shoot word from the top. To me, for one, Hawke's ice water-in-the-veins attitude seems a more likely trait of trained pilots, at least when they're on duty. Only later, I suspect, do the consequences of their actions sink in and start to take their toll. By contrast, the gushing cockpit sentiment on display here comes off as an emotional ploy.

Likewise, director Gavin Hood (Ender's Game) spends a lot of time on the ground with that little girl. As the seconds count down, he plays exactly the game that Alfred Hitchcock did in Sabotage (1936), heightening the tension by placing a child in peril to a bomb. Until the day he died, Hitch regretted the way he had let that scene play out. Did Hood and Hibbert learn from the Master's error? Sorry, no spoilers here.