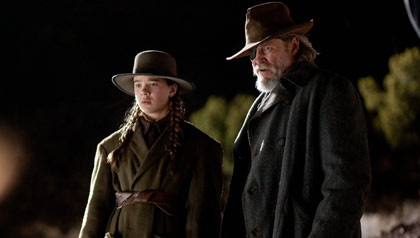 They are both one-of-a-kind screen actors.  Each has a fiercely loyal following of fans. Each won a Best Actor Oscar. And each has played the one-eyed U.S. marshal, Rooster Cogburn.

But even though he grew up in the heart of Hollywood society, Jeff Bridges, 61, never met the legendary John Wayne. Now, as his Oscar-nominated performance in last year's True Grit comes to DVD and BluRay, Bridges says he was careful to avoid cribbing any of Wayne's now-classic mannerisms from the 1969 original.

"I'd certainly seen the film, but I really wasn't interested in getting into the Duke's boots," laughs Bridges. "I had my own set."

Written and directed by the Oscar-winning team of Ethan and Joel Coen, the newer True Grit bears some striking similarities to the first — but this time around, the inclusion of a wider range of quirky characters, the striking cinematography and above all Bridges' rumbling, shuffling performance make for a very different movie experience.

Even with those contrasts, however, given the universe of possible movie projects out there, why go tramping through a film landscape that's been explored, with great success, before?

"After I read the book, I saw the reason they wanted to do that, because the book reads like a Coen Brothers script, with the wonderful characters and the twists and turns. That's why I got on board."

The Coens' distinctive formula — if you can call a history of utter unpredictability a formula — has yielded such off-kilter classics as Raising Arizona, Fargo, No Country for Old Men and, of course The Big Lebowski, the film that forever immortalized Bridges as the bathrobe-wearing, booze-swilling, hopelessly delusional slacker known primarily as The Dude.

There's a hint of The Dude in Bridges' Rooster Cogburn, but the rich language of True Grit sets the disheveled Old West lawman on a different plane completely. It's a manner of speech lifted from Portis' novel: the voice of Maddie, a middle-age spinster recalling an adventure from her teen years, avenging the murder of her father. Because of the older Maddie's age and background, the characters in her retelling — outlaws, townsfolk, children and adults alike — all speak in a formalized, structured way, their sentences elaborately formed with poetic flourishes and literary allusions. It takes some getting used to, but in the Coens' oddball universe the conceit soon becomes an accepted norm.

Bridges was in Washington, D.C., June 6 to receive a humanitarian award from the National Association of Broadcasters, recognizing his work to eliminate childhood hunger in the U.S.

"I'm the national spokesperson for the No Kid Hungry campaign," he says. "It's all about increasing participation in the federally funded programs that make sure kids have enough food to eat.

"Some 21 million kids in our country can count on free or price-reduced school lunches — but only 3 million get summer meals. It's my job to spread the word to families that there are programs, even during the summer, where kids can get meals.

"I've been involved in the issue of hunger for 30 years or so, back to when I co-founded the End Hunger Network in 1983. Eventually we shifted our focus from world hunger to hunger here in America."

In a family that always saw social activism as a responsibility, it's the kind of involvement that would no doubt have pleased Bridges' late dad.

"I loved working with him," recalls Bridges, who appeared with Lloyd Bridges in Blown Away and Tucker: A Man and His Dream, among other projects.

"Any movie I made with my dad always makes my heart swell."