Bill Murray doesn’t talk much about the movie that cemented his stardom, but as the Ghostbusters reboot hits theaters this week, we were reminded of this rare moment we witnessed at the 2014 Toronto International Film Festival, when he shared his memories of the 1984 classic. 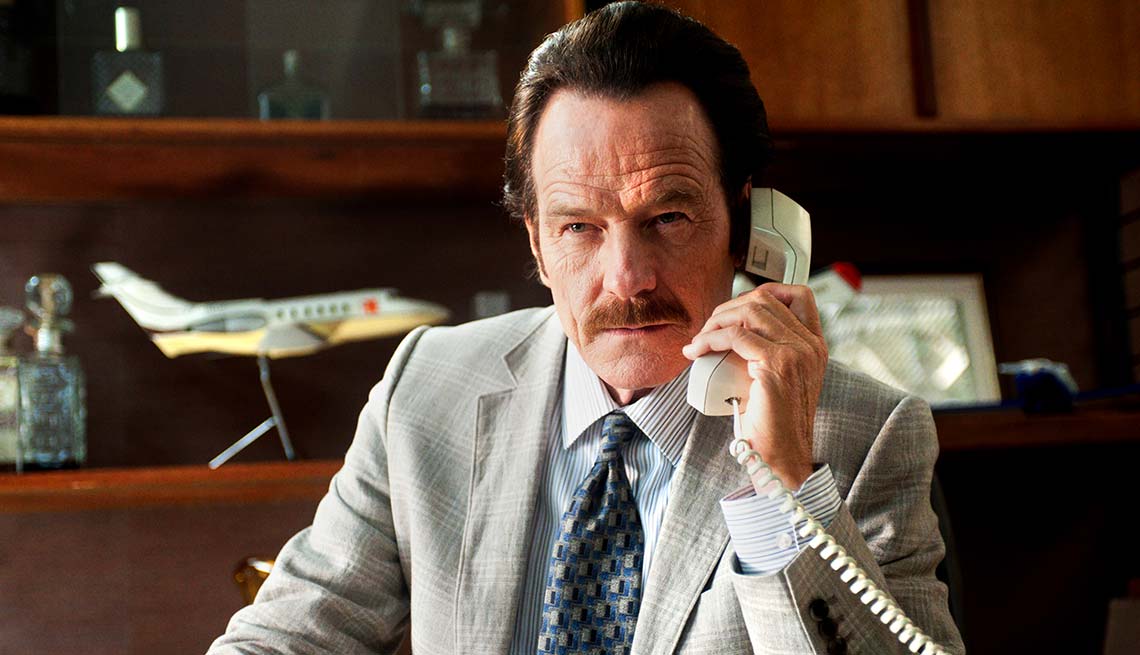 Bryan Cranston in ‘The Infiltrator’.

Bryan Cranston: As Grownup as They Come

Few stars know better than Bryan Cranston what it takes to make a grownup movie. His newest, The Infiltrator, is the latest in his gallery of intensely thought-provoking movies, which also include Trumbo, Argo and All the Way.

“A movie for grownups is a film that takes its time to unfold,” Cranston told us at the Movies for Grownups Awards in Beverly Hills this year. “The characters develop slowly, and at the end, you’re satisfied. You’ve been brought to some emotion.”

Bryan Cranston disappears into yet another character — this time a U.S. customs official who goes undercover in 1980s Miami to trap Colombian drug lord Pablo Escobar. John Leguizamo costars as his streetwise partner.

In this “spiritual sequel” to his 1993 high school comedy, Dazed and Confused, writer-director Richard Linklater (Boyhood) presents an aimless weekend in the life of some circa-1980 college students. Sadly, they are every bit as insufferable as you remember them.

Jennifer Garner and Queen Latifa costar in this faith-based film about a mother whose daughter survives a terrifying accident. The older woman then finds herself miraculously cured of a “fatal” digestive disorder. Based on the true story of a Texas family.

Viggo Mortensen is splendid as a latter-day Thoreau who raises six children in a Pacific Northwest forest, hectoring them about the superiority of their lifestyle compared with us space-age softies. After a while, though, the backwoods boasting starts to chafe like wood chips in your hiking boots. Think of it as Into the Wild meets Little Miss Sunshine, with handfuls of The Great Santini thrown in for good measure.

In this action buddy comedy, Kevin Hart stars as a meek accountant who reconnects with an old high school classmate (Dwayne “The Rock” Johnson) and gets swept into a dangerous case of international espionage.

Ellen DeGeneres leads an A-list of veteran stars — including Albert Brooks, Ed O’Neill, Diane Keaton and Eugene Levy — giving voice to the endearing aquatic characters in Pixar’s latest animated masterpiece. There are laughs aplenty, but also — as in every Pixar epic — moments of genuine sentiment and transcendent beauty.

Matthew McConaughey stars as a Mississippi farmer who leads a rebellion of whites and escaped slaves against the Confederacy during the Civil War. He gives a powerful performance, and the movie oozes earnestness. By including too many storylines, though, writer-director Gary Ross has created an overstuffed cotton bale of a movie. FULL REVIEW

It’s been 20 years since aliens tried to destroy our planet in the 1996 original — and now, wouldn’t you know it, they’re ba-a-a-ack. Veterans of that first battle, including Jeff Goldblum, Vivica A. Fox and Brent Spiner, return to save us again.

Pack your pockets with tissues before settling in for this unapologetic weepie, the story of a young woman (Game of Thrones’ Emilia Clarke) determined to make life worth living for a handsome quadriplegic (The Hunger Games’ Sam Claflin). Charles Dance and Janet McTeer are touching as the hero’s furrowed-browed parents. FULL REVIEW

Susan Sarandon shines as the overinvolved mother of a TV writer (Rose Byrne). She smothers the poor girl with attention — until Mama catches the eye of a charming ex-cop (J.K. Simmons) who rides a Harley and raises chickens. FULL REVIEW

The prodigious prestidigitators who participated in the primary part of this pair of pictures proffer a perfectly presentable postscript. Jesse Eisenberg, Woody Harrelson, Dave Franco and Lizzy Caplan are back as the Four Horsemen, a renegade stage-magic team.

Andy Samberg expands on his old SNL Digital Shorts music formats with a feature-length mockumentary about a clueless rock star. He appears alongside a galaxy of his old TV buddies, including Bill Hader, Maya Rudolph, Will Forte, Tim Meadows and Jimmy Fallon.

If we ever need to see a shrink, please let it be Paul Giamatti. Here the masterly actor plays a sports psychologist trying to help an insecure young pitcher (Johnny Simmons) overcome anxieties rooted in his relationship with an abusive dad (Ethan Hawke).

Luis Guzmán and Edgar Garcia are fun as a pair of NYPD cops dispatched to the City of Light to nab some fashion pirates. It would have been more fun if the guys had brought along their costars, Rosie Perez and Rosario Dawson, utterly squandered as their better halves back home in Noo Yawk. FULL REVIEW

Albert Brooks, Laraine Newman, Louis C.K. and Dana Carvey are among the familiar voices in this animated tale of how the critters will play when the owner’s away.