Norman calls himself a consultant. Everyone else calls him a pest.

Yet even a pest stumbles upon a winner sometimes, and writer-director Joseph Cedar introduces us to Norman at just such a moment: He spots a rather important-looking fellow on a New York sidewalk and strikes up a conversation. Learning the stranger is a mid-level Israeli diplomat named Eshel (Lior Ashkenazi), Norman befriends him to the point of ushering him into a swank men's store and buying him a costly pair of shoes (shades of Pretty Woman!).

Eshel initially resists. But whatever gifts God may have denied to Norman, charm and the power of persuasion were not among them. He buys those shoes for the guy, sticks Eshel's business card in his pocket and files Eshel in his mind as a possible cog in some yet-to-be-crafted business deal.

Three years later, Eshel finds himself unexpectedly elevated to prime minister of Israel. Norman can't believe his luck — or maybe he can, for he's so relentlessly enthusiastic about everything that it's hard to tell if he understands 90 percent of his efforts are futile. In any case, Norman cashes in on his newfound international influence — unaware that the favors a New York fixer bestows on a Queens borough bureaucrat can have shattering results on the world stage.

Gere hurls himself into the role of Norman with an abandon his character would savor. Perpetually wide-eyed, his hair tousled like a 5-year-old's, Gere's Norman lurches across the snow-packed landscape of urban parks, barking greetings to businessmen who at that moment would clearly prefer to have a mugger on their heels.

It's a funny bit, but Gere — who even now continues to establish himself as one of the screen's most subtly inventive actors — allows glimpses of the pain that lies beneath Norman's hyper exterior. He is clearly alone in the world. He seems to have been married, but maybe not. He wears the same clothes most of the time, and we never get to see his home. In one especially poignant scene, Norman appears to be bedding down for the night in Penn Station.

Cedar masterfully leaves a gauzy veil draped across his central character, a man whom time has passed by. Then again, time may never have been in sync with Norman's odd bundle of needs: a desire to help others entangled in a passion to be seen as a player in the city he seems to wander like an aging, homeless dog. When Norman makes one final grand gesture to seal his biggest deal, it strikes us as outrageous — and just right. 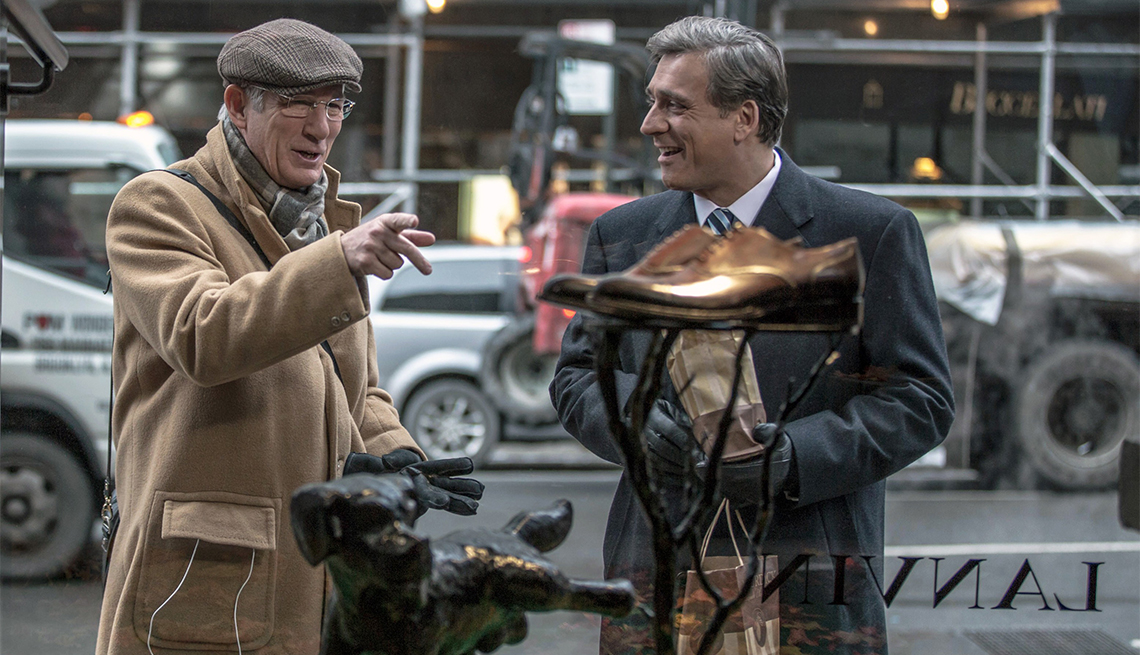 Though the world at large lives in Norman's periphery, the film offers an engaging collection of folks who know Norman as much as the man can be known. Dan Stevens and Michael Sheen pop up in small roles, as does Charlotte Gainsbourg as a reporter trying to decipher the relationship between Norman and the prime minister. Best of all is Steve Buscemi as Norman's rabbi: He evidently knows all about Norman's secret life, but discreetly opts not to insinuate himself into it.

This is the first English-language film for Cedar — a New York-born director who has worked primarily in Israel for decades — and he expects us to care a bit too much about Israeli politics. But it's worth noting that some pivotal scenes mark the first time film cameras have been allowed in the Israeli Knesset. (And that, dear reader, is why film critics stick around to read the final credits.)

Politics, schmolitics! This is Norman's universe, and in the end we come to envy his ability to blithely scamper through life, eyes straight ahead. Yes, Norman is oblivious to the fact that no one is buying what he's selling. But the joy of selling, man — that's where the action is.