(Video) Bridget Jones's Baby Movie Trailer: Bridget Jones (Renée Zellweger) is caught in another love triangle, this time wondering who the father is.

Just seven years shy of her AARP card, that still-cute-as-a-button Bridget Jones is back in the perky person of Renée Zellweger. This third installment finds our perpetually questing heroine watching the calendar pages fly, seemingly destined for a life without a man — and, presumably, without children.

Bridget has largely settled for what she has: her job as a top-flight TV news producer in London, and her fierce devotion to her quirky parents (Gemma Jones and Jim Broadbent). But such contentment would result in no movie to speak of, so events proceed apace. Bridget Jones's Baby opens at the funeral of one of Bridget's former boyfriends, the dashing but irresponsible Daniel, lost in a plane crash. He is represented at the service by a huge photograph of Hugh Grant, who played Daniel in the first two Bridget Jones movies. (Oddly enough, he gets one of the film's bigger laughs.)

Days later, Bridget serves as godmother at her niece's christening. Imagine her surprise when the godfather turns out to be Mark Darcy (Colin Firth), another old beau who is now married — and, as one of Britain's top lawyers, more successful than ever.

That's confusing, because at the end of Bridget Jones: The Edge of Reason (2004) we were led to believe these two would marry. The big emotional payoff of Edge of Reason was Mark's proposal; driving home the point with all the subtlety of a pink steamroller, the filmmakers even arranged for Bridget to catch a wedding bouquet in the finale. As movie conclusions go, I realize that cannot compare to the burning of Rosebud or the unmasking of Keyser Söze's true identity, but you really shouldn't betray the ending of a previous film to justify its sequel. Should you? 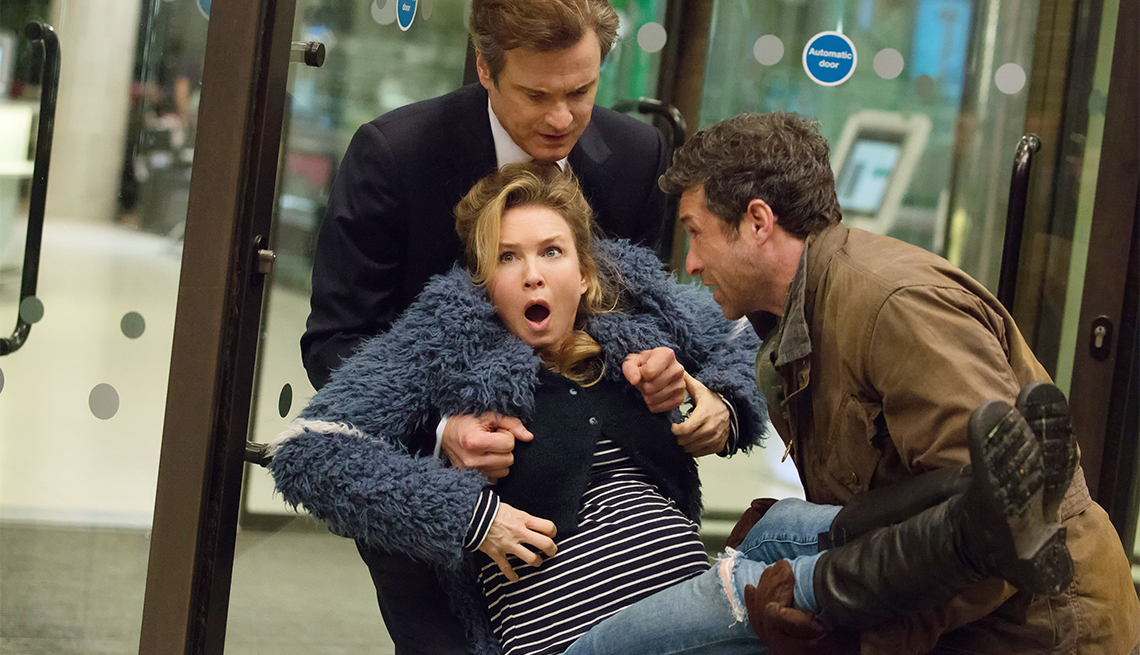 Eh, forget it. The implied between-films breakup is explained away with some circular dialogue about never having been on the same emotional page, blah blah blah. The important thing is that Bridget and Mark find themselves magnetically attracted yet again, and soon they're rolling around in a bedroom just upstairs from the christening reception — which, when you think about it, is more than a little icky.

A few weeks later, guess what? (Actually, no need; just look at the movie title.) Our heroine is delighted to be pregnant, but there's a hitch: Just days before she took that tumble with Mark, Bridget had a one-night stand with charming American author Jack Qwant (Patrick Dempsey, "McDreamy" from Grey's Anatomy).

So get this: Either one of them could be the father! Ha!

The rest of the movie unfolds largely as you'd expect, the proceedings enlivened by the appealing cast — especially Emma Thompson as Bridget's ob-gyn. Thompson, an Oscar-winning screenwriter, gets a cowriting credit on the film, which may explain why she gets the best lines in the movie.

As Bridget, Zellweger has allowed her character to age with dewy-eyed grace. Gone is the baby fat that contributed so much to younger Bridget's vulnerability; Zellweger is convincing as a middle-aged mentor to the younger folks who increasingly populate her media landscape (tell me about it). Firth has perfected playing the kind of fellow whose stiff upper lip barely conceals the surging emotions below. And Dempsey, whose comic gifts often take a backseat to his good looks, makes us wonder, once more, which of two men is better for our Bridget. ("It's Mark!" you may find yourself screaming in the dark. "IT'S MARK!")

If the ending of Bridget Jones's Baby leaves us approximately where we were at the fade-out of the last film, so what? Those who fail to learn from movie sequels are destined to repeat them.