One of the best movies of the year, The Theory of Everything is a stellar biopic anchored by two young actors who blaze mesmerically bright in virtually every scene.

It's also a realistic portrait of one of the greatest thinkers of our time, Stephen Hawking, told through the intimate lens of the woman behind him: Jane Wilde was Hawking's wife for 25 years and is the mother of their three children, all now grown. 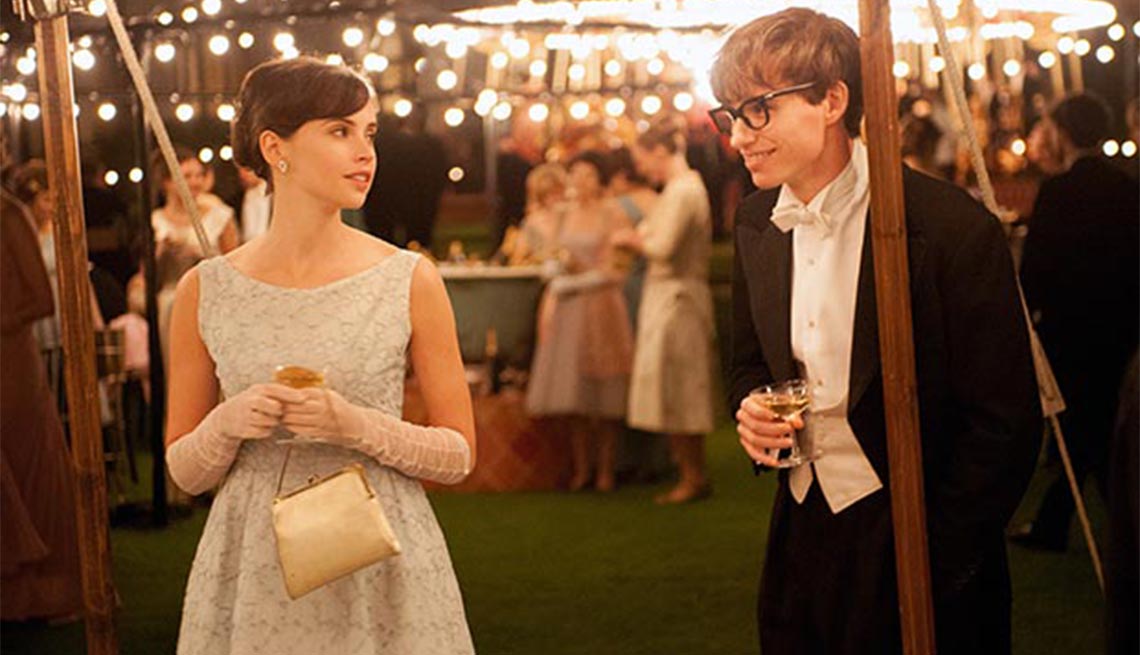 Felicity Jones and Eddie Redmayne star in the Stephen Hawking biopic, "The Theory of Everything."

Based on Wilde's 2007 memoir Travelling to Infinity: My Life With Stephen, the film avoids canonizing Hawking. To its further credit, it refuses to gloss over the complications in a marriage where one partner's priorities and needs — both professional and physical— so thoroughly eclipsed the other's. Wilde withheld the rights to her story until she could be assured that screenwriter Anthony McCarten (Death of a Superhero) would tackle the gritty caregiving story at its core. (She also received script approval.) And once Hawking himself, now 72, saw an early version of the movie, he agreed to let the filmmakers use his own distinctive — and trademarked — computerized voice in the film. "At times I thought he was me," Hawking has said of Eddie Redmayne's portrayal.

We meet the theoretical physicist and author of the best-selling A Brief History of Time, played by Redmayne — so engaging as a production assistant in My Week With Marilyn and as the rebel fighter Marius in Les Misérables — as an energetic, spirited doctoral student at the University of Cambridge. He quickly falls for coed Wilde (the lovely Felicity Jones, best known until now for The Invisible Woman), and the air crackles with their chemistry. But when the 21-year-old Hawking is diagnosed with motor neuron disease (similar to ALS, or Lou Gehrig's disease), he threatens to end the relationship for Wilde's sake; after all, his doctors have just given him only three years to live.

But Wilde won't go away. Accurately portrayed by Jones as possessing a soft exterior but steely insides, Wilde commits herself to Hawking for the long haul. She remains devoted to him throughout his physical decline, which ultimately reaches the point where he can move but a single finger.

Sure to receive an Oscar nod for his performance, Redmayne stages a bodily manifestation of Hawking's deterioration that is nothing short of remarkable. To prepare for the role, the actor studied photos and videos of his subject at each stage in the progression of his disease. He also made several visits to a London ALS clinic and worked with a dance instructor to find ways to train his muscles to contort or atrophy as Hawking's did. (After long days of shooting, Redmayne would relax in a hot bath to recover.)

When his character inexorably loses the ability to speak, Redmayne must communicate mainly by facial expressions — and, later still, only with his eyes, deftly using them to convey the impish brilliance that Hawking courageously exudes. It's hard to imagine a bigger challenge for an actor, but Redmayne nails it.

Huge kudos likewise go to director James Marsh for his casting, which extends even to minor characters played by Charlie Cox (as a church organist who helps care for Hawking and eventually marries Wilde) and Maxine Peake (as Elaine Mason, Hawking's second wife).

Hawking may never have perfected his grand unified theory, but the cast and crew of this movie shine starlight on an even deeper and more enduring product of the man's lifework: The love he shared with Wilde was one for the eons.