We must never make the mistake of basing our supposed knowledge of history on historical movies. Despite Braveheart's striking images of soldiers in skirts, for example, no self-respecting 13th-century Scot would have worn a kilt into battle. And Oliver Stone's JFK takes more outrageous twists and turns than does the "magic bullet" his script ridicules.

Likewise, The Imitation Game takes the complex strands of Britain's efforts to crack Germany's code during World War II, weaves them into a tight ball and tosses them in the lap of a single man: eccentric, quiet, secretly gay mathematician Alan Turing.

A team of cryptanalysts surrounds and gradually warms up to Benedict Cumberbatch’s Alan Turing in “The Imitation Game.”

Such a narrow view of history is nonsense, but who cares when it means we get to revel in nearly two hours of Benedict Cumberbatch? He turns in an endlessly engaging performance as a painfully awkward, aggravatingly logical, infuriatingly clueless supergenius. 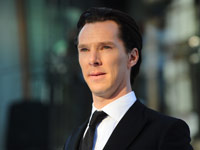 The Familiar Faces of Benedict Cumberbatch

When we first meet Turing, he is a seemingly emotionless cipher who combines the charm of Bobby Fischer with the humor of Mr. Spock.

As time goes on, however, his coworkers — and the viewing audience — slowly warm up to him, thanks largely to some on-the-job charm lessons he gets from the cryptology team's lone female member, a button-eyed genius named Joan (sweetly played by Keira Knightley).

Turing spends most of the movie stoically pursuing his dream of creating a "thinking machine" that will decipher the code. He and his fellow cryptanalysts have no shortage of raw material to sift through: Overconfident about the inviolability of their code, the Germans openly broadcast encoded messages to one other.

What they don't know is that the Allies have seized an "Enigma" encoding machine from a captured German U-boat.

But an even more powerful secret weapon in their possession is the brain of Professor Turing; he confidently assures his military overseers that he can build a machine that will crack the German code. Everyone is skeptical, but as his colleagues sit at their desks pushing pencils and crunching numbers the old-fashioned way, Turing labors away on his contraption; a clicking Tinker Toy affair with banks of slowly turning wheels. Everyone gradually loses patience with him — everyone, that is, except Joan, who knows Turing is on the right track (and also wants to marry him, despite being aware he is gay).

Director Morten Tyldum and screenwriter Graham Moore could have put more faith in their central story. Instead they frame the film with an unnecessary subplot about a burglary at Turing's home in the 1950s, rendering the main narrative as an extended flashback. There's also a flashback-within-a-flashback, as Turing periodically recalls a crush he had on another boy at boarding school.

But never fear — Cumberbatch is here. So relentless is he at portraying this conflicted, constricted man that in the few instances when Turing allows himself even the fainest smile or single trickling tear, the viewer feels like an emotional dam has burst.

Does The Imitation Game shortchange the scores of other dedicated brainiacs (think Bletchley Circle) who helped win the Allies' secret war? Yes. Does it fudge the edges of its hero's biography? Guilty as charged. But there's artistic truth to the famous maxim uttered at the end of John Ford's The Man Who Shot Liberty Valance: "When the legend becomes fact, print the legend."