Saving Mr. Banks takes us deep inside the making of the beloved Mary Poppins (1964) movie, delivering many a surprise in its intriguing-if-not-entirely-realistic character studies of Walt Disney, played by Tom Hanks, and P.L. Travers, played by Emma Thompson. (Never heard of Pamela Lyndon Travers? She’s the Australian-born author who dreamed up England’s most famous nanny in her children’s book Mary Poppins, originally published in 1934.) 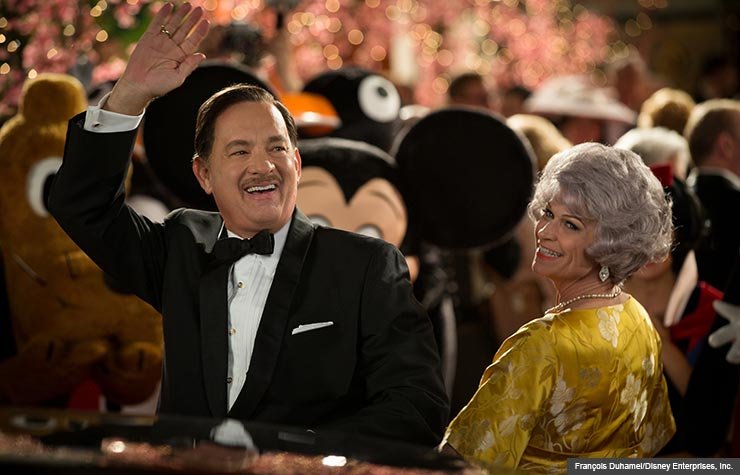 Featuring delightful backup performances by B.J. Novak, Jason Schwartzman, Bradley Whitford, Paul Giamatti and Colin Farrell, Saving Mr. Banks is funny and heartwarming. But it has its nonmagical moments too: Director John Lee Hancock tries too hard at times to inject drama into the tale, and key flashback scenes don’t mesh as smoothly as they should.

“Give her to me, Mrs. Travers,” Walt Disney begs the celebrated author. “Trust me with your precious Mary Poppins.” Disney, it turns out, has been trying to secure the Poppins film rights for two decades, but Travers — a complex, prickly, vulnerable and lonely Australian living in London (and attempting to pass herself off as a Brit) — wants nothing to do with the Great Popularizer. Nothing, that is, until her finances dry up and she agrees to fly to dreaded Hollywood in the early 1960s to meet with folksy Uncle Walt.

Dragging her feet every step of the way, Travers finally grants Disney the film rights, provided he caves to her audacious demands: For starters, she doesn’t think there should be songs in the movie. The same goes for animation — and certainly no dancing penguins! As for the notion of Dick Van Dyke’s having any part in the movie, that gives her a migraine.

Well, we all know who won those battles. When Travers requested changes after watching the film’s premiere, Disney replied with a smile, “That ship has already sailed!”

The strong script by Kelly Marcel and Sue Smith makes Travers a compelling character, but it’s Emma Thompson’s brilliant performance that brings the woman fully to life. Thompson-as-Travers is brittle but persuadable. “Proper English would be ‘Let us go and fly a kite,’ ” she tells songwriters Robert and Richard Sherman (the perfectly cast B.J. Novak and Jason Schwartzman). After a beat, she relents: “But I might be willing to overlook that.” She insists that the entire creative team, including screenwriter Don DaGradi (nicely portrayed by Bradley Whitford), address her as Mrs. Travers. Eventually she discloses her soft side to Paul Giamatti, who makes much of his small role as the confidential limousine chauffeur assigned to trundle her around town.

Fittingly, Disney — using equal parts pop psychology and salesmanship — draws out the real reason Travers is so fiercely protective of her Mary Poppins. Though nobody makes a better Walt Disney than Tom Hanks, this performance is not his best of the year. (That would be in Captain Phillips.) He’s overly schmaltzy in the scene where Walt admits his own father was no saint, then draws parallels to P.L.’s alcoholic father, Travers Goff (tenderly portrayed by Colin Farrell).

Given that Saving Mr. Banks was distributed by Walt Disney’s namesake studio, let’s be grateful the film did not come off as a much bigger wet kiss. The unexpected story lines and idiosyncratic personalities keep us engaged the full two hours. And thank goodness for Emma Thompson! Her performance is as magical as Mary Poppins herself.