En español | Those of us who've always dreamed of rocketing into orbit from Cape Canaveral get one heck of a buzzkill in Sandra Bullock and George Clooney's new sci-fi action flick, Gravity.

Don't get me wrong: The elegantly choreographed opening scene, in which a space shuttle crew floats around the craft like hummingbirds hovering near a magnolia blossom, lives up to any would-be astronaut's fondest dreams, and then some. And Bullock and Clooney, peppering each other with playful banter, seem to be having precisely as much fun up there as we would.

But then comes a cloud of shrapnel-sharp space junk and, well, let's just say this time around "Houston, we've got a problem" doesn't quite do the trick.

In one of the most harrowing scenes ever set beyond the mesosphere, the projectiles tear everything in their path to shreds — everything, that is, except Bullock and Clooney (and we shall use their real names here, because in Gravity neither actor is asked to be anything other than their standard-issue screen selves: she plucky and resourceful, he cocky and self-effacingly heroic). 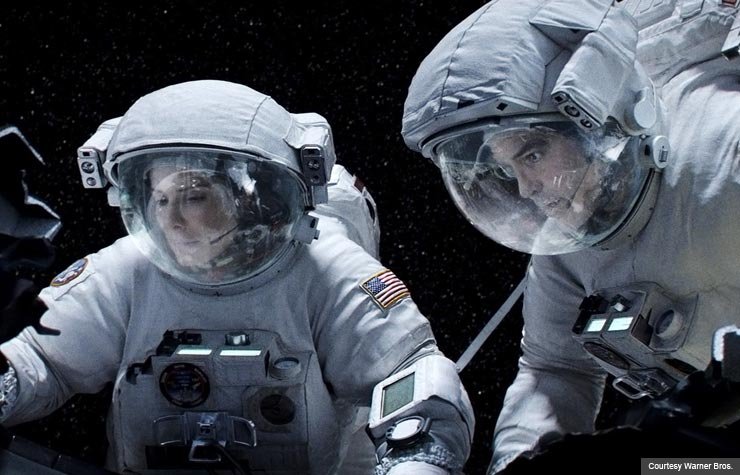 Sandra Bullock and George Clooney get lost in space.

The two astronauts should be dead. Or at least doomed, with their shuttle reduced to a lifeless, Swiss cheese-like hulk and all contact with Earth cut off. But the pair's survival of that initial onslaught turns out to be the least implausible in a series of increasingly far-fetched events.

Sure, movies are often composed of outrageously crafted coincidences and supremely unlikely twists, but because Gravity sets itself up as a meticulously realistic vision of life in orbit, the bar for plausibility here is just a bit higher than normal.

Casting his gaze across the void, Clooney spots the International Space Station. Yep, it just happens to be floating around in the neighborhood. Let's head on over there, he suggests chirpily, activating his space suit's jet pack and tugging Bullock along via the tether that connects them.

It's a pretty long haul, and Bullock is running out of oxygen fast, but Clooney keeps chatting her up. "Where you from?" he asks. "Got any kids?" Wait a minute — these scientists trained together for months, maybe years, and only now they're getting down to small talk? I'm no rocket scientist, but it seems to me that when an astronaut's oxygen levels are down to 2 percent or so, maybe you should ixnay the idle chitchat.

In Gravity, the road to rescue is pitted with spent fuel tanks, unexplained fires, sharp-edged debris, failed heating systems and uncontrolled leaps through the vacuum of space … with a flood thrown in for good measure. A thousand Wile E. Coyotes chasing a desert full of roadrunners would never encounter so many perils, so improbably, in so little time.

Gravity's lazy dialogue doesn't help. Almost every time a character opens his or her mouth — or crackles in over the radio — it's to present some awkward expository material. Even when Gravity takes moments to try and conjure up some human sentiment, those interludes seem as contrived as the action sequences. Sitting in a capsule, resigned to death, Bullock suddenly makes radio contact … with some guy on Earth and his dog! What, the sight of Bullock howling pitifully along with a pooch doesn't move you to tears? OK, how about this: A minute or two later a crying baby pipes up! Next, I half expected, the ship's radar screen would glow with an image of distraught Auntie Em calling, "Dorothy? Dorothy!"

That dog-and-baby scene is where Bullock has her big dramatic moment, and although she carries it off admirably, cowriter-director Alfonso Cuarón can't resist having her tears, digitally rendered and fake as flying jellyfish, float off her face in quivering blobs.

Gravity teases us like this throughout: The film dazzles us with images and action sequences that place us at the epic center of space flight with a palpable immediacy we haven't experienced since Stanley Kubrick's 2001: A Space Odyssey. But just as Kubrick's breathtaking vision of deep space was rudely interrupted by the film's impenetrable freak-out finale, so in Gravity Cuarón keeps yanking us back into a contrived fantasy version of space in which, among other things, the world's space stations are all lined up in the same neighborhood, like a low-altitude trailer park. (Is one space station riddled with holes? Well, heck, let's just pop on over to the neighbors and see if they're home!)

On the positive side, makers of action movies can learn a lesson or two from director Cuarón. Even as all hell is breaking loose on screen, Cuarón never lets us lose our bearings. We always know precisely what's happening, where the characters are in relation to each other, and how far (or close) their nearest refuge of safety is. Compare that to action directors like Michael Bay (Transformers) or Gore Verbinski (The Lone Ranger), who seem to delight in disorienting their audiences to the point of utter confusion.

Gravity is frustrating because, despite its flaws, it is a technical marvel populated by appealing stars. If Cuarón had entrusted those elements to a script that treated its audience more like grownups and less like denizens of a B-movie matinee, he could have created a high-flying classic, rather than an ultimately airless quick thrill.