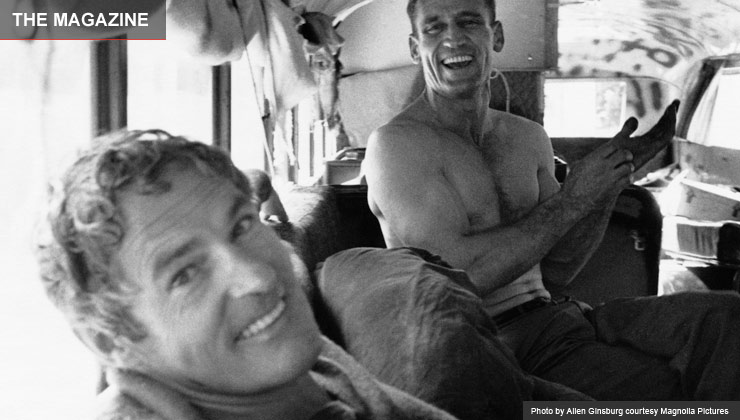 Mad Men creator Matthew Weiner has said that when his much-ballyhooed TV series is at its best, it isn't so much a story as it is a time machine — transporting viewers back to the 1960s and a way of life that sometimes looks, to audiences a half century removed, to be taking place on another planet.

I suspect that directors Allison Ellwood and Alex Gibney feel the same way about their new documentary The Magic Trip, which chronicles One Flew Over the Cuckoo's Nest author Ken Kesey's 1964 drug-fueled, psychedelic bus journey across the country with The Merry Band of Pranksters, his eclectic band of pals and acquaintances. The bones of this particular road trip, regarded as one of the seminal events of the burgeoning counterculture movement that would dominate the latter half of the decade, have been picked over for pop culture analysis and entertainment many times before, most notably in Tom Wolfe's book The Electric Kool Aid Acid Test.

But Ellwood and Gibney have a newly unearthed advantage in their attempted retelling: hours and hours of actual film and audio created 47 years ago by Kesey and the Pranksters as they made their way on a bus dubbed "Further" from the San Francisco Bay Area to the New York World's Fair. You can imagine how excited the directors, whose passion for their subject matter is clear, must have been to get access to the footage — and then, after having sifted through it, how daunted they must have been by the task ahead.

Here's the problem: Kesey, whose original intent was to document his journey on his own, didn't bother to bring along any professional photographers, so the footage he shot was — to put it mildly — a complete mess. Most of the footage is jittery, much of it is unfocused, and none of it is synced with audio. We're told (in narration by actor Stanley Tucci) that for the bulk of 40 years Kesey himself tried to turn his footage into a film, without success. After his death in 2001, the collection languished until the directors struck a deal with the author's estate.

Considering the quality of the source material, what Ellwood and Gibney have come up with is kind of amazing. With generous use of subtitles and a dose of psychedelic animation, they've taken more than 100 hours of footage and crafted a dreamy montage of the trip. Look, there's an amphetamine-fueled Neal Cassady (of On the Road fame) chattering nonstop — and nonsensically — as he drives the bus. Yes, drives the bus. Listen to Kesey narrate one of his acid trips (the filmmakers assist with kaleidoscopic animation of colored shapes and Rorschach images). Watch the Merry Pranksters make an unscheduled stop in the desert (not that any of their stops were scheduled, of course) to down some peyote and invent tie-dyeing.

It's all a bit uneven, and the flashes of interesting material too often get lost in all the psychedelia. The movie meanders — and, ironically for a movie about people who sought to open their minds, The Magic Trip won't be all that enlightening for anyone not already intimately familiar with the bus trip and its zany cast of characters. This is a documentary skillfully built on nostalgia, and made to appeal to those who know its story well. If that's you, step on board the time machine and enjoy the ride.