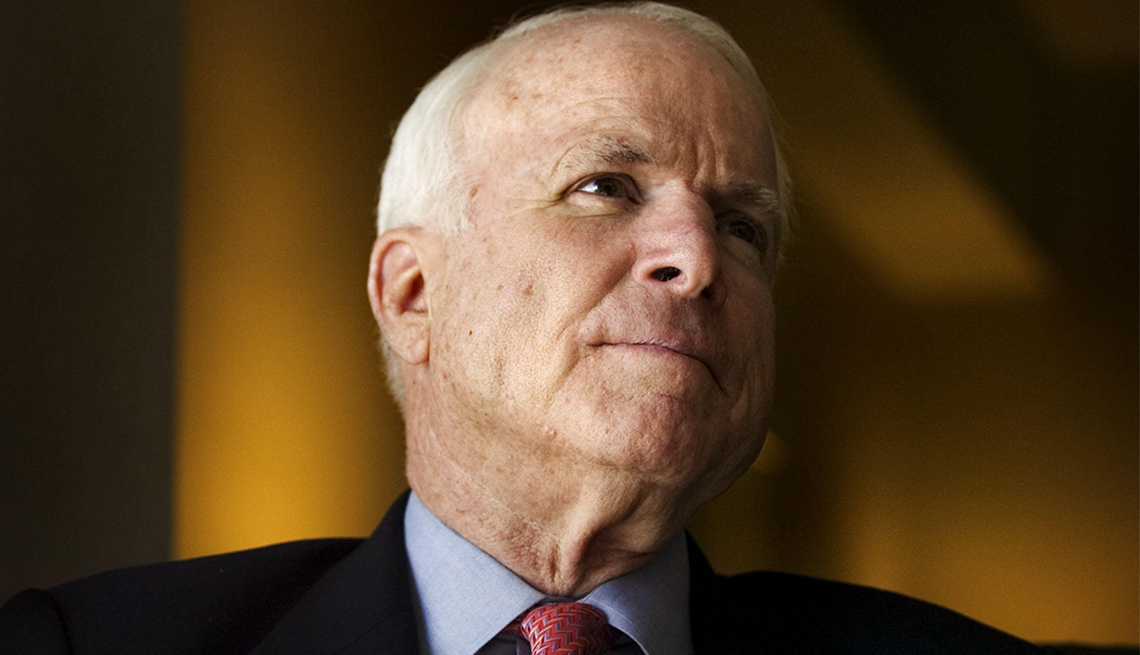 En español | Right until the end of a remarkable life, U.S. Senator and former presidential candidate John McCain remained true to his indefatigable, scrappy nature. A defiant prisoner of war in Vietnam for five-plus years and a dedicated public servant for six decades, the feisty but fair-minded Arizona Senator fought the good fight not only for his life but for America. After a courageous year-long battle against brain cancer, the 81-year-old statesman died Saturday at his Arizona ranch.

McCain was diagnosed with glioblastoma, a virulent form of brain cancer, in July of 2017. He was surrounded by family and friends at his passing. He is survived by his wife, Cindy, seven children and five grandchildren.

“The nation has lost a true public servant in Senator John McCain,” said AARP CEO Jo Ann Jenkins. “He earned the title ‘American Hero’ many times over. His courageous vote last year to protect Americans’ health care is just one example of his principled approach to his public service. He fought life’s challenges with distinction, honor and courage, from his time as a prisoner of war to his most recent battle with brain cancer. We have lost a great American, and all of us at AARP send our deepest sympathies to Cindy and his family.”

An outpouring of admiration and respect from political colleagues on both sides of the aisle regarding McCain’s extraordinary life flooded social media on Saturday.

In a statement, former President Barack Obama said: “Few of us have been tested the way John once was, or required to show the kind of courage that he did. But all of us can aspire to the courage to put the greater good above our own. At John's best, he showed us what that means. And for that, we are all in his debt.’’

“America and Freedom have lost one of her greatest champions . . . And I’ve lost one of my dearest friends and mentor,’’ tweeted Republican Sen. Lindsey Graham of South Carolina.

U.S. Senate Minority Leader Chuck Schumer of New York issued a statement saying that he plans to introduce a resolution to rename the Russell Senate Office Building after McCain. “He was always willing to speak truth to power,’’ Schumer told CNN last spring. 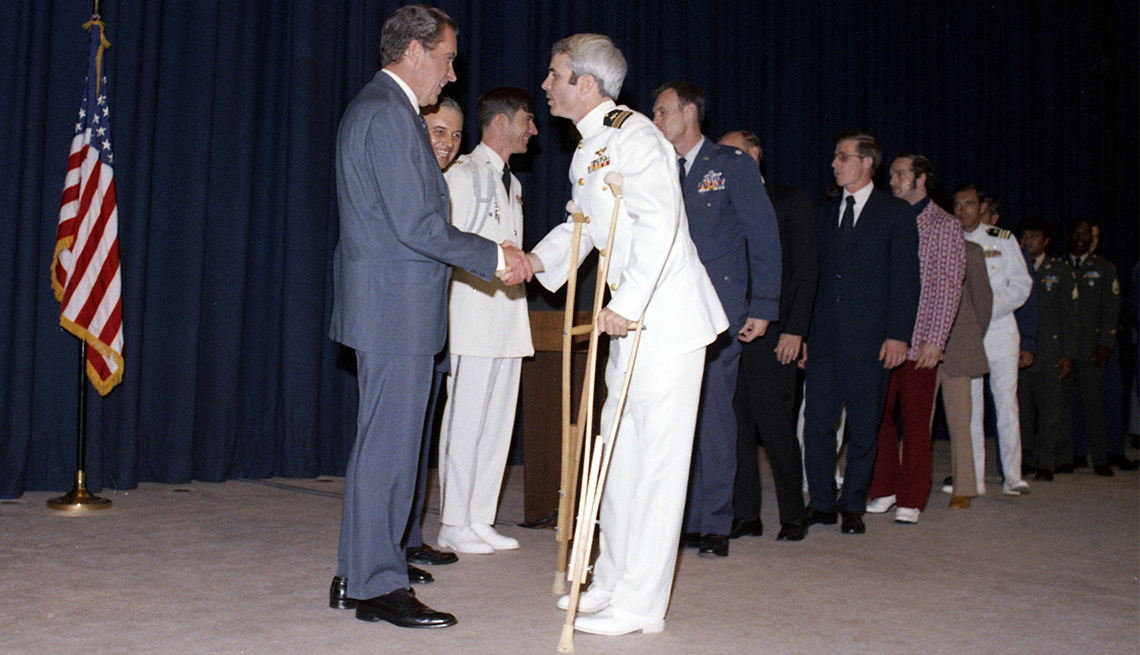 Capt. John McCain, after his release from a North Vietnamese prisoner-of-war camp, shakes hands with President Richard Nixon at a pre-dinner reception in Washington, DC, May 24, 1973.

Standing only 5-feet-8 inches, the jaunty patriot was widely considered a towering example of an American hero who campaigned on a platform of integrity, blending a sense of duty, sacrifice and honor. The son and grandson of four-star Navy Admirals, McCain spent 5½ years in confinement in a North Vietnamese prison — known as the “Hanoi Hilton” — after his Skyhawk dive-bomber was shot down over a lake in 1967. He suffered two broken arms and a busted leg.

Shortly thereafter, McCain’s captors wanted to release him, but the Navy pilot would have none of it. It is theorized that he was extended the offer of freedom because his father, John McCain Jr., was commander of the U.S. forces in the Pacific. Because of his father’s lofty status, his jailers began calling McCain “Crown Prince.’’

Upon his refusal to leave prison, McCain was beaten and tortured by guards and held in solitary confinement for more than two years. But he had displayed the loyalty that was one of his hallmarks. He had upheld the P.O.W. code of honor that would not allow him to be repatriated before other American soldiers who had been imprisoned longer. He was released in 1973. 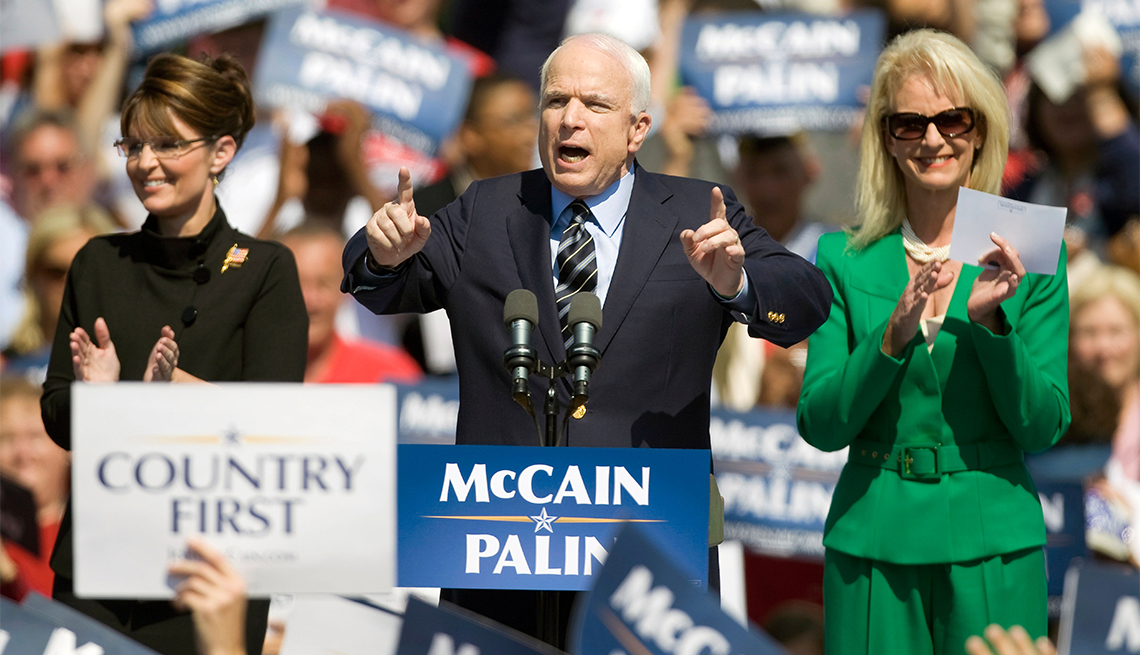 Sen. John McCain on the 2008 presidential campaign trail in Virginia with his running mate Gov. Sarah Palin, left, and his wife Cindy McCain.

With an unflinching glint in his eyes, the decorated Navy pilot eventually took his maverick and iconoclastic instincts to the nation’s capital. McCain served six terms in the U.S. Senate. He displayed grace and forbearance in the aftermath of his landslide defeat to Obama in the 2008 presidential election.

McCain was first elected to the U.S. House of Representatives in 1982, then to the U.S. Senate four years later, where he served from 1987 until his death. A tenacious and outspoken leader, he balanced toughness with compassion; his sense of justice never wavered. He often was lauded for remaining above the partisanship fray to achieve legislative successes, most notably regarding campaign finance law, immigration and veterans’ benefits.

McCain engaged in political scraps fairly and without lingering contentiousness, even as verbal sparring with President Trump escalated during the last three years.

“I hope we can again rely on humility, on our need to cooperate, on our dependence on each other to learn how to trust each other again, and by so doing better serve the people who elected us,’’ he said before the Senate after he cast the deciding vote against the repeal and replacement of the Affordable Care Act.

That vote came a short time after his diagnosis was made public. With his typical humor and humility, McCain also told his colleagues, “I’ve had so many people say such nice things about me recently that I think some of you must have confused me with someone else.’’ Then he added: “I appreciate it though — every word — even if much of it isn’t deserved.’’

Admittedly, he was flawed. “I made a lot of mistakes,’’ McCain often said. Among his lowest moments was involvement in the Keating Five scandal relating to a financier and campaign contributor who went to prison for fraud. McCain and four other senators were admonished but not charged with a crime.

McCain was reflective, self-aware and appreciative of an abundant, accomplished life. In a memoir published four months before his death — “The Restless Wave. Good Times, Just Causes, Great Fights, and Other Appreciations’’ — McCain’s metaphor for life led him to conclude, “A fight not joined is a fight not enjoyed, and I wouldn't mind another scrap or two before I'm a memory.’’

“Who knows, maybe I'll get another round. And maybe I won't. So be it. I've lived in this wondrous land for most of eight decades, and I've had enough good fights and good company in her service to satisfy even my restless nature. Who am I to complain, my friends? I'm the luckiest man on Earth.”