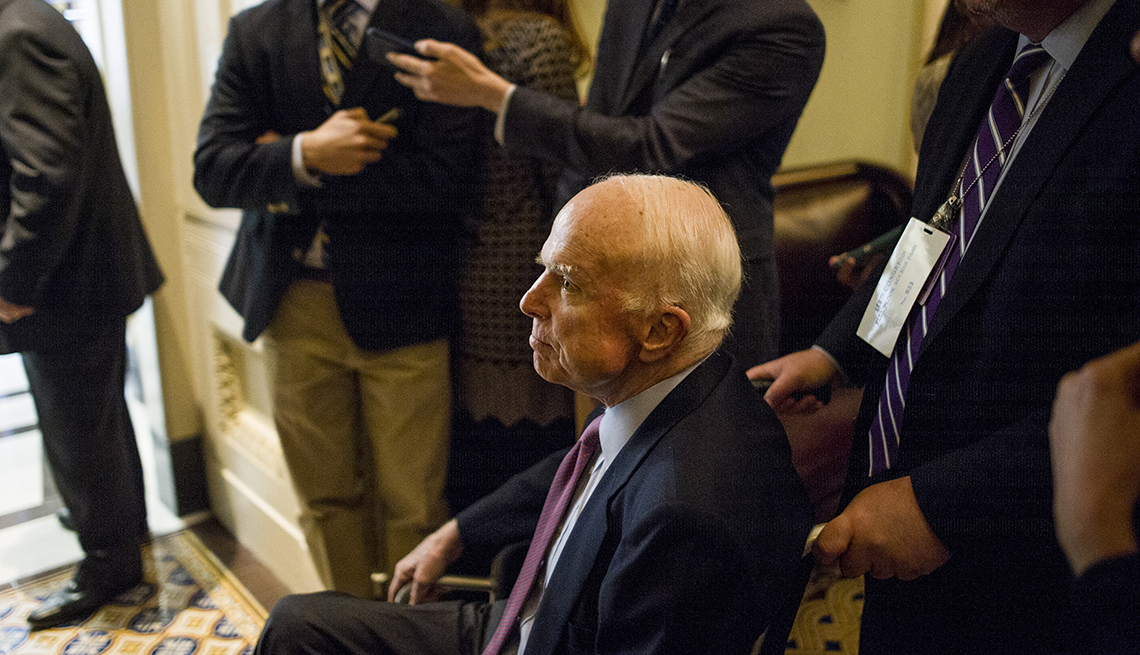 Sen. John McCain, seen here in early December, underwent brain surgery in July, after which a biopsy showed he had glioblastoma. He recently was hospitalized due to side effects from chemotherapy and radiation treatments.

There are more than 100 distinct types of brain and nervous system tumors, but current media focus is mostly on one because of the hospitalization last week of Sen. John McCain, 81 (R-Ariz.). McCain’s form of cancer, called glioblastoma, is particularly aggressive and deadly. It also has claimed the lives of Ted Kennedy, Beau Biden — son of former Vice President Joe Biden — and a surprising number of retired Major League Baseball players. Here’s what we know about this challenging disease.

About 12,400 new cases of glioblastoma were expected in 2017, according to the American Brain Tumor Association, accounting for roughly 15 percent of all primary brain tumors. That makes it a relatively rare cancer. But unlike other cancers, glioblastoma does not spread to other parts of the body. Instead, it kills by destroying the brain, causing an array of symptoms that include headaches, blurred vision, seizures, confusion, or weakness in body parts controlled by the affected regions of the brain. Patients often end up in wheelchairs with personality changes and diminished mental capacities.

Glioblastoma seems to be on the rise because the risk increases as we get older and some believe we will see a rise in this type of brain cancer as the American population ages. It is more common in men over age 50. Doctors and researchers haven’t made much headway in battling it, though experimental therapies in the research pipeline may help. “We know much more about the biology of this cancer,” says David Reardon, M.D., clinical director of the Center for Neuro-Oncology at the Dana-Farber Cancer Institute in Boston. “More treatments are coming along to exploit [its] vulnerabilities.”

The standard approach is surgery to carefully remove as much of the tumor as possible without affecting brain function. That is followed by concurrent radiation and oral chemotherapy. McCain underwent brain surgery in July, after which a biopsy showed he had glioblastoma. He since has been receiving chemotherapy and radiation treatments at Walter Reed National Military Medical Center in Bethesda, Md. Median survival — which means half of patients live longer — is about 15 months; only 10 percent of patients may survive more than five years. The lucky few normally have several factors in their favor: their age — being younger is better; whether surgeons are able to remove most of the tumor; a more uniform molecular makeup of their tumor cells; and whether they respond to targeted therapies like Avastin, which throttles the growth of blood vessels that feed the tumor.

There are a host of reasons why glioblastoma is so lethal, and why medical science doesn’t have many weapons in the therapeutic arsenal (there are only a limited number of drugs that have been approved to treat glioblastoma). For starters, it’s tricky finding medications that can get past the blood-brain barrier, the thick membrane of blood vessels that shields the brain from harmful substances. Plus, this type of cancer is notoriously resistant to most chemotherapies. And even for the one that is marginally effective, it’s hard to get enough chemo into the brain in concentrations sufficient for killing these cells.

What’s more, the cancer itself is invasive. It often has long, microscopically thin roots radiating from the initial tumor that are intertwined with normal tissue and can’t be surgically removed. And because it’s the brain, the seat of our intellect and emotions, doctors must be careful about cutting out too much and leaving patients with severe impairments. “It’s always a delicate balancing act about how much tissue we can take out while keeping basic functions intact,” says Jana Portnow, M.D., associate director of the Brain Tumor Program at City of Hope in Duarte, Calif.

There is some hope on the horizon. Clinical trials are testing dozens of experimental medications that include vaccines, gene therapy, viruses that can kill tumors and CAR-T therapies — which engineer patients’ immune-system cells to hone in on specific proteins in tumor cells. Researchers believe that combining these approaches, such as using CAR-T in tandem with immunotherapies, might help patients live longer. “The only way we’re going to make advances in this disease is by coming at it in all directions,” says Susan Chang, M.D., director of the Division of Neuro-Oncology at UCSF.