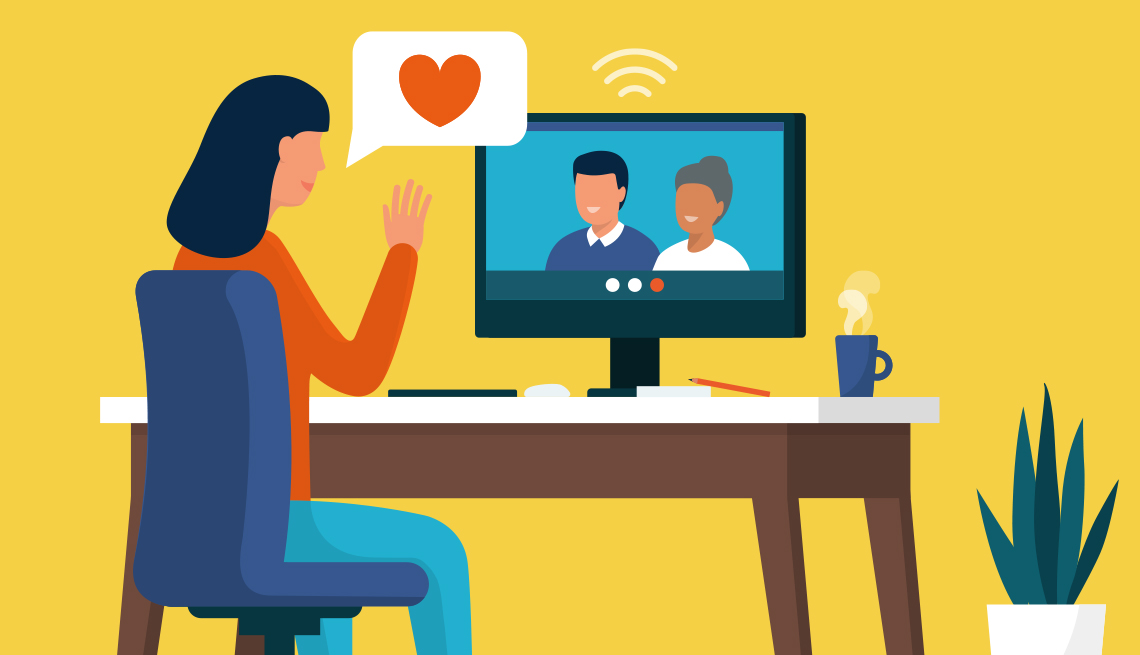 As awful as the past three months have been for much of America — forced to stay at home to quell the spread of a deadly coronavirus — at the very least, we have no shortage of ways to stay connected with loved ones.

While many of us are practicing physical distancing, that doesn't mean we need to be alone socially.

Video chatting services are a meaningful and personal way to talk with kids, grandkids, friends and colleagues. With group calls, many people are virtually attending book clubs, church services, yoga classes and even weddings and funerals.

Most services are free and work with several devices you already own. And you don't need a degree in computer engineering to figure out how to participate.

As a result, video calling will no doubt remain the norm after the pandemic. The question isn't whether you should video chat but rather which platform you should use. After all, everyone you're seeing and hearing on the call needs to be on the same one for it to work.

The following is an alphabetic quick summary of what's trending and the pros and cons of each choice.

FaceTime works only on Apple products

Popular for a while now, Apple FaceTime is simple to set up and use, but you'll need a supported Apple device to take part, such as an iPhone, iPad, iPod Touch or Mac.

Up to 32 people can engage in a call at the same time.

For Mac users, click to open the FaceTime app, the little green square with a white video camera icon in the middle, and enable it. If your Apple ID isn't registered, you'll need to sign in, once.

Facebook's Rooms wants to be your Zoom

If you're a user of the world's largest social media platform by far, you've likely sent plenty of private messages over Facebook Messenger through the years. Built into Facebook and a dedicated app, Facebook Messenger is also an ideal way to make free phone calls and engage in video chats with friends.

Another benefit is that Messenger works on many kinds of devices: Android and iOS phone and tablet apps, Mac and PC apps, web browsers, and Facebook's Portal family of smart displays. Facebook says 1.3 billion people use Messenger each month, so you likely have an account already.

For some added fun, Messenger Rooms has camera filters that use augmented reality to change your background or how you look to the people in your chat along with 18 silly minigames to play if you want to do two things at once.

Also owned by Facebook is WhatsApp Messenger, which also allows groups of friends, up to eight people, to video chat.

Google Meet is free until Sept. 30

Whether through apps like Google Hangouts — which allows group audio and text on phones and tablets and video calls via a Chrome browser extension — or Google Duo for phones and tablets, Google has allowed its users to video chat for many years now. But the new and improved Google Meet makes it the most comprehensive offering from the company to date.

Originally built to host secure business meetings but now free to everyone until Sept. 30, Google Meet is a reliable and secure platform that allows up to 100 people to connect over video.

Although Google officials say group video chats are limited to 60 minutes for the free version, they are not enforcing it at this time. The only catch is requiring a valid Gmail account to sign in. If you use the web version, only the Google Chrome browser, said to be less vulnerable to cybersecurity threats, is supported.

To get going, go to meet.google.com or via your Android or iOS mobile app and sign in with your Gmail address.

While Microsoft now is heavily pushing its Microsoft Teams solution for businesses, Skype remains one of the most popular ways for regular consumers to chat through audio, text messaging or video. It began in 2003 in Europe as desktop software, migrating later to smartphones, and Microsoft bought it in 2011.

Up to 50 people can engage in a video call.

Skype is available on several kinds of devices and operating systems — computers, mobile phones, tablets, web browsers and Xbox video game consoles. It's to use when calling another Skype user, but calling a landline or mobile number will cost a little per call. Rates are posted here for an optional monthly plan.

Other features include blurring your background, recording calls, sharing files and scheduling a call for a future date. All you have to do to schedule a call is give it a title, pick a date and time and set a reminder for yourself and others.

One of the breakout tech stars during the coronavirus crisis, Zoom has evolved from a business-centric tool to an incredibly popular consumer video chatting platform.

And for good reason: It's easy to use, works with virtually all devices and allows for up to 100 video participants on one call. More so than other video solutions, Zoom also is the easiest for scheduling a conference call in advance and easily inviting people over email or text message.

You can record the video call to watch later, or “screen share” over Zoom if you want to allow other participants to see what's on your device, such as a video or photo. Plus, you can have fun with virtual backgrounds if you want to make it look like you're on, say, a beach with waving palm trees instead of in a messy home office!

But several problems emerged quickly, such as “Zoombombing,” where uninvited guests crashed video calls with the intent to disrupt them. To the company's credit, most of those problems were resolved with new layers of privacy and security.

You don't need to spend the $14.99 a month to use the Zoom Pro version when the free one is probably good enough for you. But be aware of one main limitation: Video calls that involve more than two people are limited to 40 minutes.

Several competing yet mostly free video platforms have their pros and cons. Yet as long as you have strong Wi-Fi and good lighting, there has never been a better time to reach out, virtually, to connect with loved ones.

Marc Saltzman has been a freelance technology journalist for 25 years. His podcast, Tech It Out, aims to break down geek speak into street speak.