En español l You might think your medical costs will be taken care of once you qualify for Medicare. But you'll quickly find that you're still paying out of pocket, and probably paying much more than you expected. 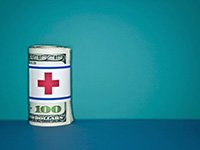 Calculate what health care will cost you when you retire.

Fidelity Investments, which has been tracking retiree health care costs for more than a decade, estimates that a 65-year-old couple retiring this year will need $240,000 to cover future medical costs. That doesn't include the high cost of long-term care. Nor does it take into account additional costs you may incur if you decide to take — or are forced into — early retirement before your Medicare kicks in.

Fidelity's estimated $240,000 includes the cost of deductibles and copayments, premiums for optional coverage for doctor visits and prescription drugs, out-of-pocket expenses for prescription drugs, and other expenses that Medicare doesn't cover, such as hearing aids and eyeglasses.

Even if you face no other costs, paying for premiums and deductibles for the traditional Medicare choices of Parts A, B and D (rather than opting for the Medicare Advantage program known as Part C) can quickly eat up retirement savings. Consider:

Part A covers inpatient hospital costs, stays in skilled nursing facilities, home health care visits and hospice care. Most beneficiaries pay no premium for Part A, but there is a deductible of $1,184 this year for inpatient hospital stays.

Part D, the drug plan that had more than 32 million beneficiaries enrolled in 2012, charges an average monthly premium of about $40 — or $480 a year.

Put it all together and you're looking at $3,069.80 a year for basic Medicare coverage, assuming you meet your hospital deductibles. And unless you stay out of a hospital altogether, you will meet the deductible. The average cost of a hospital stay in 2009, according to the federal Agency for Healthcare Research and Quality, was $2,000 a day, and the average stay cost $9,200. Even if these were the only health care costs you incur, in 10 years your annual spending would be $30,698 at today's prices, and higher if health care costs continue to rise faster than the cost of living.

Given the news from the Employee Benefit Research Institute that 60 percent of workers report that they or they and their spouses have saved less than $25,000 for retirement (excluding the value of their homes and pension plans), it's going to be a tight squeeze for many retirees.

Pat Fero, who lives in Sun Prairie, Wis., already knows what that feels like.

A 63-year-old former high school English teacher, Fero has diabetes and severe osteoporosis, for which she takes the prescription drug Forteo. In addition to the cost of Part D premiums, Medicare recipients may find themselves paying more if they reach the so-called doughnut hole. Here's how it works: Once total retail drug costs under the plan exceed $2,970 (in 2013), those with Part D start paying 47.5 percent of the cost of brand-name drugs and 79 percent of the cost of generics until the costs of that and other drugs reach the cap of $4,750. There is no generic version of Forteo, so for the four months she was in the gap in 2012, Fero paid $569 a month for the drug. When she reached her doughnut hole limit, her payments went back to $55 a month.

Next page: What can you do to help cover your health care costs? »

"I'm in that group of fortunate people who can pay, but it's taken a lot," Fero says. She and her husband, Bruce, also a retired teacher, have an income of about $65,000. They budget carefully to cover health care costs, which now consume about 40 percent of their income.

Fortunately, health care spending for most Medicare beneficiaries isn't that high. But it does represent, on average, nearly 15 percent of what Medicare households spend, according to the Kaiser Family Foundation. That's three times more than non-Medicare households spend. And for those 80 and older, average health care spending accounts for just under 18 percent of household spending.

In addition to the money needed to cover basic premiums and deductibles and coinsurance, you're also going to be responsible for routine dental care, routine eye care and hearing aids and the exams for fitting them, because Medicare doesn't pay for those. The American Dental Association estimates that two exams and cleanings and a set of X-rays in 2011 cost about $288, on average.

Hearing aids can range from $900 to more than $3,000 each, depending on the technology, says Bettie Borton, president-elect of the American Academy of Audiology. Some are built with Bluetooth capability that streams sound from your cellphone into both ears, making it much easier to hear a telephone conversation, she says.

Hearing aids do need to be replaced periodically. Borton estimates that with proper care and maintenance (batteries are a continuing cost) they will last about five years. Hearing tests are covered by Medicare only when they are medically necessary, such as in the case of severe vertigo or a traumatic injury to the ear, she says.

So what can you do to help cover your health care costs? If you're lucky, you have employer insurance or retiree insurance. In 1988, 66 percent of retirees from large firms (which are the most likely to provide coverage) had employer-provided health insurance. But only 25 percent of such firms now offer retiree health benefits, according to Shaun O'Brien, assistant policy director for health and retirement for the AFL-CIO.

Veterans who qualify for health benefits can get health care and prescription drugs through the Department of Veterans Affairs, but if they need treatment outside a VA facility, they will need Medicare, according to the Medicare Rights Center.

If you are in an IRS-defined high-deductible health plan, you might consider a health savings account. According to Rich Bailey, principal at benefits consultant Mercer, HSAs "can be funded while the employee is active and working and can be used later in life." This is different from a flexible spending account, where employees deposit pretax dollars but lose any money that isn't spent in a given year.

Although employers sometimes contribute to an HSA, you're the one who controls it, even if you leave your job. "The money goes in pretax, earns free of tax and can be taken out and used for qualifying medical care without paying taxes," Bailey says.

If you've already retired, you may want to consider buying medigap insurance to help cover the costs that Medicare doesn't pay. These are policies with private insurance companies, but they are limited to 10 standard plans, which make comparison shopping easier. Once you've decided on the type of plan, be sure to compare prices for the same coverage from different companies. The Medicare Rights Center notes that in Albany, N.Y., the monthly costs of premiums for a Plan A medigap policy varied from $98.20 to $267.99. Prices also differ by jurisdiction. One insurance company's Plan A charged $170 in Albany and $208 in Long Island. In 2011, the median annual premium for standardized medigap plans was $2,120.

The policies can be well worth the expense, says Sunit Patel, a senior vice president at Fidelity, because of the volatility of health care costs from year to year. You might be exposed to $1,000 in health care costs on average, "but one time it could be zero and another time it could be $10,000." Traditional Medicare has no limit on out-of-pocket costs, although medigap insurance may cover most of those expenses. But the Affordable Care Act requires all Medicare Advantage private health plans such as HMOs and PPOs (which are part of Medicare but offered as an alternative to the traditional program) to place annual limits on their enrollees' out-of-pocket costs. The maximum limit is $6,700, but plans are allowed to set lower limits of $3,400 or less if they choose, and some (usually HMOs) do so.

Martha M. Hamilton is a former business columnist for the Washington Post.