LOUISVILLE — Affecting an estimated 1 million Americans a year, shingles typically occurs when a dormant virus from an old case of chickenpox reawakens and triggers symptoms — usually a rash on one side of the face or body, blisters, fever and pain. Some people develop pain that lingers even after the rash is gone; that ongoing pain is postherpetic neuralgia or PHN.

See also: What You Need to Know About Shingles.

A vaccine exists to reduce the risk of shingles in certain age groups, but there are many obstacles to obtaining the shot. The U.S. Food and Drug Administration approved the vaccine Zostavax in 2006 for use in people 60 and older, and earlier this year the agency OK'd the shot for ages 50 and up.

The approval for 50- to 59-year-olds stemmed from a multicenter study that indicated that the vaccine could "reduce the risk of developing shingles by like 70% if you got vaccinated in that age group," said Dr. Steven Spalding, a family medicine physician with Norton Community Medical Associates in Middletown, Ky. But some medical facilities are waiting until action by the U.S. Centers for Disease Control and Prevention before agreeing to provide the vaccine to people 50 to 59. 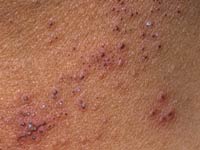 The topic is expected to be discussed at the June meeting of the Advisory Committee on Immunization Practices, which makes vaccine recommendations to the CDC. Other obstacles include the cost of the vaccine — which can exceed $200 — and supply shortages . "Over the last couple of years, we've had some supply disruptions due to some unexpected manufacturing issues," said Jennifer Allen Woodruff, a spokeswoman for Merck & Co., which makes the vaccine. "We continue to release doses of Zostavax ... but as inventory is building, we'll still have some back orders from time to time."

There is a find-a-provider tool on the Zostavax website that allows the public to search for places offering the vaccine, but it may simply say "status unavailable." "We're providing the most up-to-date information that we can on that website, and through other communications vehicles," Woodruff said. But "it's not a bad idea (for consumers) to check in with their pharmacy" to see whether Zostavax is available.

It's also wise to check with your insurance company to see whether your shot will be covered. Many insurance companies are expected to wait until after the CDC advisory committee's vote before deciding whether to cover the vaccine for ages 50-59, and the shot isn't always covered for ages 60 and up. Doctors' offices often don't carry the vaccine because of reimbursement issues — the vaccine is covered under Medicare Part D (with some exceptions) but not Medicare Part B.

It also has to be kept frozen. So consumers may have to go to a pharmacy or clinic that offers the vaccine. They may find, however, that it isn't a Medicare Part D benefit there.

"For a lot of people, it's cost-prohibitive," Spalding said of the shot. Dr. Rachel Busse, a family medicine physician at Highlands Family Medicine, said most doctors' offices "usually send patients to the pharmacy to get it, and some pharmacies require a prescription and some don't." "You have to sort of call ahead and make sure that your particular pharmacy will give the injection," Busse said, since it can be difficult to get it back to a doctor's office fast enough.

Busse said the vaccine is usually well-tolerated and doesn't have a lot of side effects beyond soreness at the injection site. She recommends the shot to people age 60 and older to reduce the risk of getting shingles, which nearly 1 in 3 Americans develop. The shingles virus lives in nerve tissue, and it's not entirely clear why it reactivates, triggering the condition. This occurs "more commonly in folks who are either older or under stress, but it can happen to anyone," Busse said.

Complications can include blindness, hearing problems and pneumonia, according to the CDC. Shingles can be treated with antiviral medication, such as acyclovir. "Generally if you start on an antiviral medicine early on in the course, it can shorten the course of shingles or make postherpetic neuralgia less likely to happen," said Busse. Postherpetic neuralgia can be treated with such drugs as Lyrica (pregabalin) and Neurontin (gabapentin). But patients aren't always satisfied.

"I've tried everything," including Neurontin, Tylenol and a rub from a catalog, said Mary Metzler of southern Louisville who has grappled with shingles and PHN for years. She's now considering a nerve block. Metzler also tried getting the vaccine after shingles developed, in hopes that it would give her some relief from her flare-ups. Though it didn't help her, she still suggests the vaccine to people who haven't had shingles before. "Oh yes. I live in a condo and I've told more people over here" to get Zostavax, she said. What is shingles? — Shingles is a painful condition caused by the varicella-zoster virus, which also causes chickenpox.

After a case of chickenpox, the virus becomes inactive. Sometimes it reactivates, causing shingles. Doctors do not know why the virus reactivates, but stress, medical problems and suppressed immune systems are thought to be factors. — Shingles usually runs its course in about four weeks. Sometimes individuals develop a long-lasting pain condition called postherpetic neuralgia. Other complications include pneumonia, vision loss and encephalitis, an inflammation of the brain.

Signs and Symptoms — Rash on one side of the body or the face. — Blisters that develop at the rash site and then crust over. — Pain, often tingling-type pain, can occur before the rash appears. — Fever, headache, fatigue and/or chills. Treatment — Antiviral medications, taken soon after symptoms begin, to shorten the episode and ease the severity. — Plenty of rest and fluids. — Drugs to help relieve pain and reduce fever. — Covering blisters until they crust over. Do not scratch the blisters because they can become infected. — Washing hands often. — Hospitalization in some severe cases.

Copyright 2011 The Associated Press. All rights reserved. This material may not be published, broadcast, rewritten or redistributed.