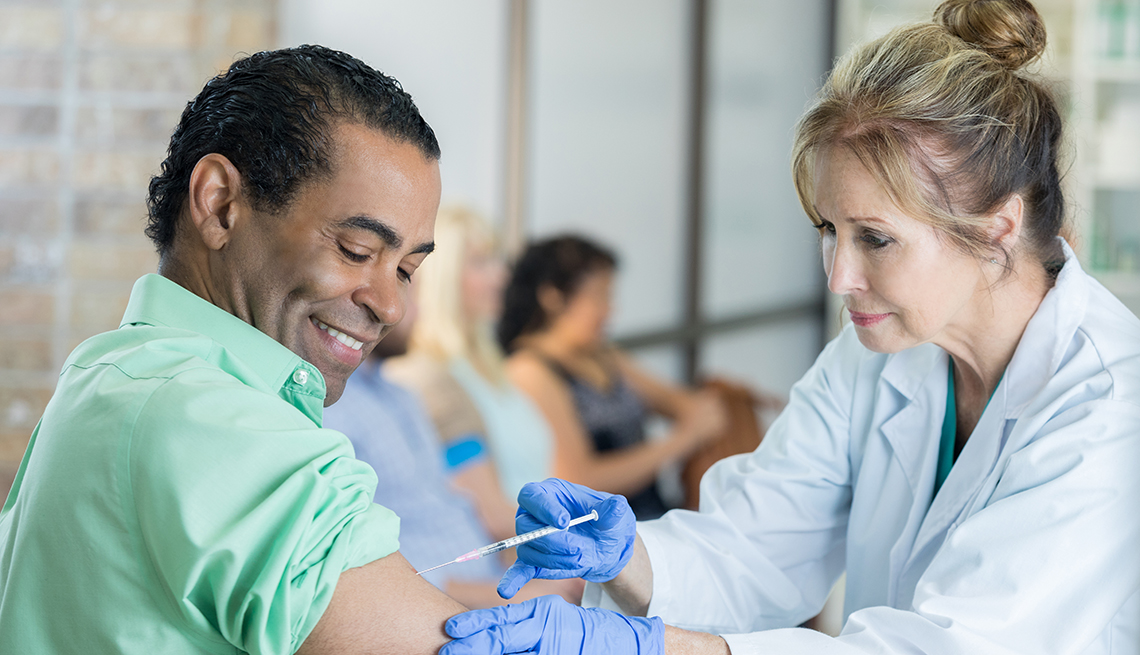 En español | It’s not too early to start thinking about scheduling your flu vaccine. The Centers for Disease Control and Prevention (CDC) recommends you do so by the end of October, and your body needs a good two weeks after your shot to get your virus-fighting antibodies up and running. If you’re stopping by your doctor’s office or a retail or walk-in clinic for your annual shot, it’s also a good time to consider whether you’re up to date on all the other vaccines you should be receiving as an adult.

After all, adults — yes, even those 50 and older — need a poke to protect against serious, and potentially lethal, diseases. And coupling your flu shot with a pneumonia vaccine, for instance, can help you avoid serious respiratory problems that can sometimes piggy back on a system weakened by flu. (You may have heard that the government was changing pneumonia vaccine recommendations; that hasn’t happened yet, but your doctor will have the most up-to-date information.)

Getting up to date on the necessary vaccines can have other benefits, too. “There are new vaccines that have come out in the past several years, specifically aimed at older adults,” says Morgan Katz, M.D., an assistant professor of medicine at Johns Hopkins University School of Medicine. One of them? Shingrix, the amazingly effective shingles vaccine.

Below you’ll find the four vaccinations every adult needs, followed by two — for hepatitis A and B — that you need only if you have certain risk factors. What you won’t see on the list? Measles and chicken pox vaccines. Anyone born before 1957 wouldn’t need a measles vaccine because the disease was so prevalent when they grew up that immunity as an adult is assumed. Chicken pox is similar in that most adults already have immunity from childhood exposure to the disease, Katz says. “Almost all adults over 40 have been exposed to chicken pox,” she says, noting that it would be “an extremely rare case” for an adult not to have been. That said, if you think you could be in that tiny minority, ask your doctor about getting the chicken pox vaccine as an adult.

For the rest of the list, you can get your necessary shots at doctors’ offices, pharmacies, workplaces, community health clinics and other locations. And most health insurance plans will pick up the tab. So stop in and let ‘em stick it to you.

Who needs it: All adults, no matter what their age.

How often: Once a year. “The virus itself changes every year,” says Katz. “Researchers try to predict what will be the most common strain that season, then reformulate the vaccine accordingly.” Flu season typically begins in October and ends in March; the CDC recommends rolling up your sleeve by the end of October since it takes about two weeks after a vaccination for flu-fighting antibodies to develop in the body.

Why you need it: The flu can lead to hospitalization and sometimes death — and seniors are the most vulnerable. Studies show that a vaccination can reduce the risk of illness by as much as 40 to 60 percent.

Talk to your doctor if: You’ve had a severe reaction to the flu shot in the past, are allergic to eggs (funny enough, the flu vaccine is most commonly grown in them), have (or have had) Guillain-Barré syndrome, or have a fever. (In that case, you'll likely be asked to wait until your temp is back to normal before you get the vaccine.)

Parting shot: Even if you’re vaccinated, there’s a possibility you could get the flu. How well the inoculation protects depends on different factors, including your age and health status. That said, a flu vaccination may lessen the severity of illness if you do get sick. A 2017 study found that flu vaccination reduced ICU admissions and the length of hospital stays among flu patients.

Who needs it: Healthy adults 65 years and older, or adults 19-64 with certain risk factors (smoking, or health problems, such as chronic lung or heart disease, leukemia, lymphoma or alcoholism).

How often: The CDC recommends two pneumococcal vaccines for healthy adults 65 and older. Don’t get them at the same time. You should receive a dose of the pneumococcal conjugate vaccine (PCV13), then a dose of pneumococcal polysaccharide vaccine (PPSV23) one year later. Those who have any of the risk factors above should get one dose each of PCV13 and PPSV23 before age 65, separated by eight weeks.

Parting shot: If you work around chronically ill people — say, in a hospital or nursing home — you should get the vaccine, even if you’re healthy.

Who needs it: The Tdap vaccine came out in 2005, and along with protecting against tetanus and diphtheria, like the vaccine it replaced, it also includes new, additional protection against whooping cough, also known as pertussis. If you can’t remember ever getting this shot, you probably need it. And doing so, says Katz, can also count for one of the Td boosters you’re supposed to get every 10 years. (You know the one ... it's the shot you wonder if you're current on after you step on a rusty nail during your vacation.)

How often: You get Tdap only once, and after that, you still need the Td booster every 10 years. Otherwise, your protection against tetanus and diphtheria will fade.

Why you need it: Due to a rise in whooping cough cases in the U.S., you really do need to be vaccinated against it, even if you’re over 65. In the first year after getting vaccinated, Tdap prevents the illness in about 7 out of 10 people who received the vaccine.

Talk to your doctor if you: Have epilepsy or other nervous system problems, had severe swelling or pain after a previous dose of either vaccine, or have (or have had) Guillain-Barré syndrome.

Parting shot: This vaccine is especially crucial for people who have close contact with infants younger than 12 months of age — including parents, grandparents, and child care providers.

Who needs it: The CDC recommends that everyone 50 and older get the new shingles vaccine, Shingrix, even if they had the earlier recommended vaccine, Zostavax — which was much less effective — and even if they've already had shingles.

How often: For now, the CDC is recommending only that you get this new vaccine, which is given in two doses spaced two to six months apart, to prevent both shingles and its complications. It remains to be seen if the agency will recommend getting it again, after, say, five years, as its effectiveness starts to wane.

Why you need it: One in three people will get shingles, usually after age 50. The risk rises with age. By 85, half of adults will have had at least one outbreak. Chicken pox and shingles are caused by the same virus, varicella zoster. After a person recovers from chicken pox, this virus stays dormant for decades in the body, ready to appear when the immune system is weakened by stress, medication or disease. This infection causes a red rash and painful blisters. About 15 percent of sufferers are left with extreme nerve pain — a condition called postherpetic neuralgia (or PHN), which can last for months or years. Shingrix can protect 97 percent of people in their 50s and 60s, and 91 percent of those in their 70s and 80s.

Talk to your physician if you: Are not feeling well, or currently have shingles. There are few other reasons not to get the vaccine.

Parting shot: Older adults should also get this vaccine whether or not they remember having had chicken pox as a child. Why? More than 99 percent of Americans over the age of 40 have been exposed to the varicella zoster virus, even if they don’t recall getting chicken pox.

Who needs it: People 50 and older who are at high risk for hepatitis A (HAV), a disease of the liver. Infections result primarily from travel to another country where hepatitis A virus transmission is common, through close contact with a hepatitis A-infected individual, or recreational drug use.

How often: Once, but given in two doses over six months.

Why you need it: Hepatitis A rates in U.S. have declined by more than 95 percent since the hepatitis A vaccine first became available in 1995. In 2016, there were an estimated 4,000 hepatitis A cases in the U.S.

Parting shot: This is a sneaky disease. You may not have any telltale signs — and the likelihood of symptoms decreases as you age.

Who needs it: Adults 50 and older who are at risk for contracting hepatitis B, a liver infection. Hepatitis B is transmitted when a body fluid (blood, semen, saliva) from a person infected with the hepatitis B virus enters the body of someone who is not infected. This can happen through sexual contact, or things like contact with blood or open sores (say, from a job that exposes you to human blood or other bodily fluids), or sharing anything from a needle to a razor to a toothbrush with an infected person. Other risk factors for infection include being on kidney dialysis, traveling to countries where hepatitis B is common, or having HIV.

How often: Adults getting the vaccine need three doses — the second dose given four weeks after the first; the third dose five months after the second. There is also a combination vaccine for both hepatitis A and B called Twinrix, which is given in three doses over six months.

Why you need it: The CDC estimates that the estimated number of new HBV infections in 2016 was 20,900.

Talk to your physician if you: Have a life-threatening allergy to yeast, or to any other component of the vaccine, or are moderately or severely ill when a dose of vaccine is scheduled.

This article was updated with the AARP Top Tips video.