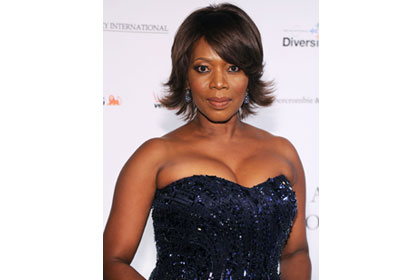 The 2011 Emmy Awards on Fox Sunday at 8 p.m. ET will showcase an increasing number of nominated actresses who are over — or pretty darn close to — age 50. Which means we'll see a fashion show on the red carpet that grownup viewers can relate to.

Most of the talented actresses nominated this year are known for making good fashion choices, starting with the Emmy host, Jane Lynch, 51, who is also nominated for her supporting actress role as Sue Sylvester in Fox's hit show Glee.

Let the 20- and 30-year-olds walk the carpet in strapless gowns, revealing miniskirts, low-backed and thigh-high slit frocks and teetering platform heels. Veteran actresses are actually relieved to be done with the fashion designers' It Girl club.

"Working with mature actresses is such a joy," says Susan Ashbrook, author of Will Work for Shoes: The Business behind Red Carpet Product Placement.

"Older actresses are revered for the quality of their work, not how they look in a bikini," she explains. "Most of them have attended numerous award shows, so they know how many hours and how many people are required to get them all dolled up.

"And these seasoned veterans are comfortable with their bodies. They know what colors look best on them and how to accentuate their best features and disguise their flaws. They also care far less about big designer names. They know that a great gown is a great gown."

Next: Comfort is more far important for older actresses. >>

Most older actresses like those named above sniff at the latest trends and aren't the slightest bit concerned with those Best and Worst Dressed Lists. And they're refreshingly honest about what they like — and don't like — to wear.

"I grew up loving the movie "Mary Poppins" so when I had the opportunity to work with Julie Andrews for Escada, I jumped at the chance," recalls Ashbrook. "Julie knew exactly what she wanted so if I pulled a dress that was too fashion forward or not the right color, she politely declined. Our conversation went something like ‘Well, that certainly is lovely, Susan, but I think it's just not quite right for me.' Julie's 'spoonful of sugar' wasn't just reserved for her Mary Poppins role."

Comfort — not the latest wacky and possibly unflattering fashion trend — is more far important for older actresses. Many carry an extra pair of shoes (OK, their publicists do) so they can slip off their high heels after a few hours.

With good reason. An awards night is an exhausting drill that starts with hours of prep, an hour long limo ride, a two-hour arrival carpet gauntlet — blinded by photogs and hammered by reporters — a two-hour live televised ceremony (be sure to smile even when your name ISN'T announced) followed by dozens of backstage TV interviews, culminating with several early morning schmooze-fest after-parties.

Ashbrook predicts that you won't see nominees such as Bates, Lynch or Falco wearing gigantic gowns with sequins or fussy bows. "Edie, like many older actresses, loves her solid colors and knows primary colors work best for her, especially her favorite color, red."

Lynch probably faces the biggest fashion challenge as her hosting gig may require a few (possibly comedic) costume changes. While she's worn sleeveless ball gowns to past awards (a purple one-shoulder Ali Rahimi gown at the 2010 Emmys, a lavender Ali Rahimi gown to the 2011 SAG awards), don't be surprised if she wears a dressy pantsuit or perhaps a tux, as she does in an Emmy promotional photo.

Tuxedos not withstanding, problem areas for many older actresses can be the shoulders, arms, elbows and hands. Shawls, chiffon scarves at the neck or light wraps create an illusion of a skin show.

She's referring to Mirren's stunning George Chakra claret-colored gown with long sparkling Swarovski crystal sheer sleeves to the 2008 Oscars. Her personal stylist, George Blodwell, initially worried that the glittery sleeves might look too "Ice Capades" but was relieved when the actress received rave fashion reviews for the look.

Next: Color is also important as you age. >>

Mirren also wore a Christian Lacroix three-quarter-sleeve embroidered ivory creation in 2007 when she won an Oscar (as well as every other best actress award that year) for her role in The Queen. She sported shimmery sheer sleeves on her silver Badgley Mischka gown at the 2010 Oscars. Clearly, she doesn't mess with a winning fashion formula.

Some older actresses, such as multiple Emmy nominees/winners Sally Field, Christine Baranski and Glenn Close, can pull off a strapless look thanks to their well-toned arms and slender figures.

Ashbrook notes that petite Field embraces classic, well-tailored dresses. "She knows a little nip and tuck from a seamstress's hand makes her look good on the red carpet from any photographer's angle."

Both Ashbrook and Blodwell often suggest big statement jewelry for older actresses. "I hate seeing very young actresses wearing large pieces of jewelry," says Ashbrook. "They have to be careful because big jewelry can be overwhelming. But not for those fortunate older gals who can carry off the extravagant eye-catching designs."

Color is also important as you age. Black, while slimming, can also be a bit harsh and aging especially on the red carpet. No surprise that Betty White loves to wear bright red and turquoise and she often wears the latter to play up her twinkling blue eyes. At age 89, she's also not above choosing a dressy pantsuit or a sparkly or colorful tunic over slacks rather than a formal gown. Comfort is key.

Past Emmy nominee Sigourney Weaver's statuesque figure and dark hair can pull off bold colors. Ashbrook explains: "Sigourney has incredible taste and loves to wear big earrings to draw focus to her face. She's most fond of bold colors like red and green and occasionally black. Her GOC (gown of choice) usually is a one-shoulder that shows off her amazing shape and posture."

For this year's Emmys, he's dressing multiple Emmy winner (12 nominations, seven wins) Cloris Leachman. He won't spill designer names but he did tell us that Cloris will walk the carpet in a lovely lavender gown with statement jewelry. And if she wins, she'll slip into a sleek black number for the after parties. A gold Emmy statue is probably the only accessory she will need at that point.

For older actresses, Blodwell always suggests classic, timeless silhouettes. He adds that fitting and flattering the older figure is the real trick.

"It's not really about age. It's about the fit. I always try to create a waist, with an A-line skirt or an empire waist. And I'm a big fan of décolletage for older women. They all usually need some help in the tummy area. I always put them in Spanx. Sometimes two pairs," he says with a laugh.

Elizabeth Snead is a fashion and popular culture writer and writer/producer of TheDishRag. She also covers award show fashion for DeadlineHollywood.com.