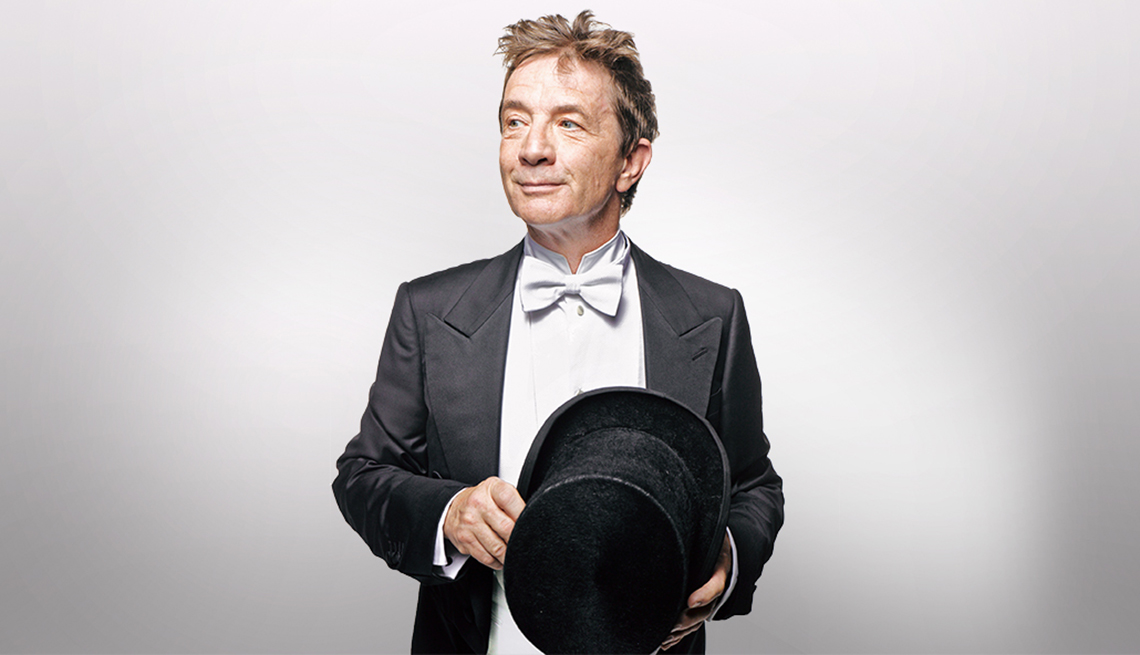 Sit down with Martin Short and you’ll instantly see why he’s considered one of the greatest talk show guests of all time. At the Draycott restaurant in L.A.’s Pacific Palisades neighborhood, the comic — known for warped sketch characters like antic man-child Ed Grimley — was cracking us up before the staff had even come to pour water. Short, a Saturday Night Live alum, is also a standout emcee, which is why AARP has tapped him to host the 18th Annual Movies for Grownups Awards, airing on PBS on Feb. 15. “Finally,” he quips, “an audience that will get my Ida Lupino references!” (Well, yes, and any Emma Watson references, too.) But Short has a serious side as well. Between dates for his touring stage revue with close friend Steve Martin — Now You See Them, Soon You Won’t — he shared his thoughts on film, friends and the pursuit of happiness.

What does the term “Movies for Grownups” mean to you?

So many films now are spectacles: a fantasy with dragons, or a cartoon or slasher movie. I see “Movies for Grownups” as the “What else is out there?” category — the thought-provoking or inspiring films that aren’t about some guy dangling off a cliff as he’s being shot at with laser beams. They’re the films for people like me.

Which films grabbed your attention recently?

I thought A Star Is Born was fabulous. I loved Beautiful Boy — important, terrifying. Timothée Chalamet and Steve Carell are incredible together. But watch them in a theater. People watch films and TV everywhere now: on their phones, on their iPads, sitting on the toilet. I don’t like it. The easier it becomes, the less magic there is.

Your stage show with Steve Martin has a kind of magic to it.

Steve and I are very loose with each other. If I were doing my own show, it would be more structured. You can’t be as playful by yourself. That’s why I was never drawn to stand-up at all. This is way more playful than a one-man show. Mainly it’s because we’re very close friends. That’s how this all started. I mean, we’ll go on a vacation together, take our families to Jamaica, on our time off from doing the show.

How is comedy different now from when you got started?

I don’t know that it is. Comedy is so subjective. I love the Three Stooges. You might hate them. It doesn’t make either one of us a moron. I don’t know if you’ve ever heard the Mike Nichols and Elaine May album from their Broadway show. When you listen to it, it’s 1960, and I think it’s as relevant today as it was then. The characters work, and the choices are as funny as if you were seeing Second City in Chicago this evening. It’s crazy just how hip and current they were.

How do you keep your comedy current — or timeless?

Once in the 1990s, Christopher Guest asked me, “Do you ever think in terms of no longer being current? Do you worry that another kind of comedy that you don’t find funny will take over?” And it had never even entered my mind. I think that was the last time I gave it thought, because it doesn’t really matter to me. At the age of 68, I continue to go with my instinct of what I think is funny, and I continue to make a living. That’s all that really matters. I’m not a big believer in shelf life.

Martin Short
A Look Back 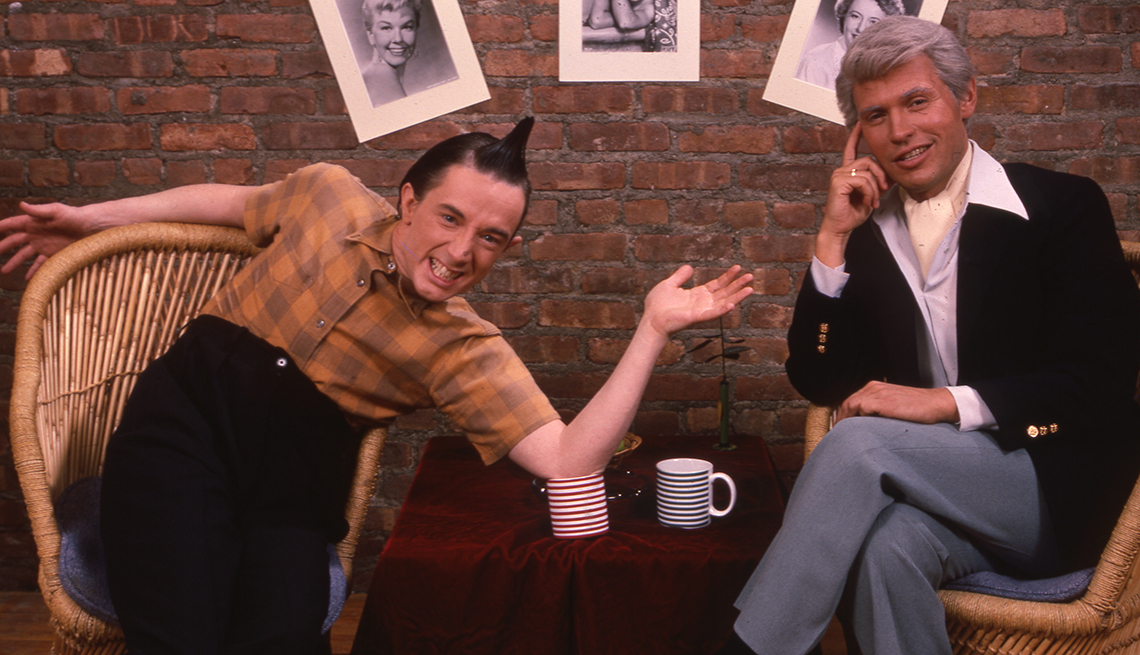 Martin Short and Billy Crystal on the set of "Saturday Night Live" in 1984. 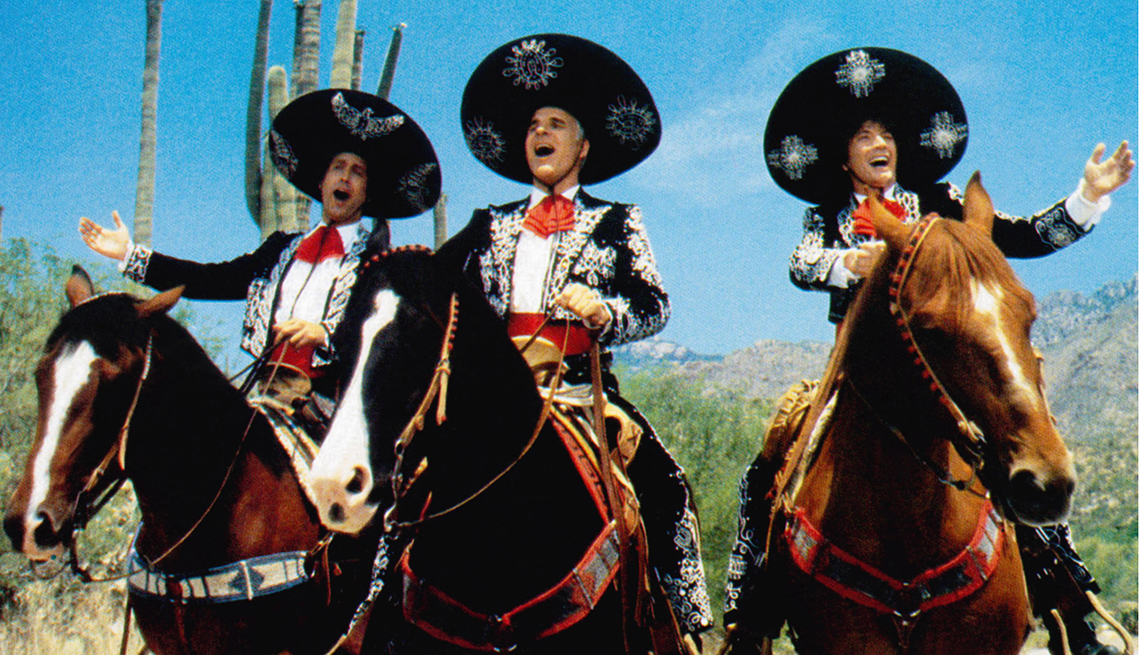 No. If I had wanted to go to India, I would have done it. If I’d wanted to direct a film or a play or a TV show, I would have. My life lists are more pragmatic. For decades, I’ve maintained a list according to several categories of well-being: health, family, friends, money, career, creativity, self-discipline and lifestyle. Periodically, I give myself a report card. It shows what needs to be shored up. Health: Have I had my annual physical? Friends: Do I need to phone so-and-so? To me, life is a practical experience each day, with a coating of “Be as happy as you can be” on top. When I was a little boy in grade two, as we Canadians like to say, the question was posed, “What is the most important thing in life?” And my response was, “To be happy.” If you’re lucky enough, part of that is being a helpful spirit to the people you love. That’s what takes you from day to day.

How did you come to that philosophy — a sort of pragmatic pursuit of happiness?

Not long after I finished university, I realized that success isn’t just about your career. It’s similar to a GPA: determined by the whole picture, not one course. So even if you’re failing in one category, you can create a good, happy life if you shore up the other categories. And that’s what I’ve tried to do.

What’s your favorite thing about getting older?

Well, I definitely think I’m wiser now. You would like to think that you’ll have the wisest version of yourself on the last day you live. Also, there was a time in my life when I’d face an audience and I’d have to start by winning them over. Now when they see Steve and me come out, they go, “There they are!” We’ve already won them over with our careers up to that point. So that’s nice.

You lost your wife, Nancy, to cancer after almost 30 years of marriage. How has that affected you?

Our marriage was a triumph. So it’s tough. She died in 2010, but I still communicate with her all the time. It’s “Hey, Nan,” you know? How would she react to this decision or that, especially regarding our three kids. I believe that when people die, they zoom into the people that love them. This idea that it just ends, and don’t speak of them — that’s wrong. That’s based on denial that we’re all going to die. So to me, she’s still here. At the same time, her death emboldened me to take risks. With real tragedy, you become a little more daring. It’s the yin to the yang: the positive part of life’s dark side.