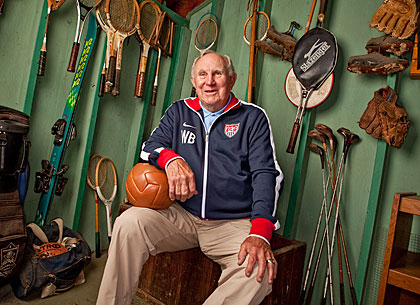 En español | At 83, Walter Bahr has become a media darling — for the shot on goal he took in a soccer game 60 years ago.

In June 1950, Bahr, a 23-year-old junior high physical education teacher from Philadelphia, led the United States team to a 1-0 victory over powerhouse England in the World Cup. Soccer historian Clemente Angelo Lisi called the game "the greatest upset at a World Cup — and perhaps in all of American sports history."

But few people in the United States heard about it at the time, and fewer cared. "Ninety-nine percent of Americans didn’t know anything about soccer," says Bahr, who now lives in Boalsburg, Pa.

Today, the sport has its own cable channel, and American children are seemingly issued a soccer ball and assigned to a local youth team at birth. With a strong U.S. team set to take on England in the opening round of the 2010 World Cup in South Africa on June 12, Bahr is himself finally getting some long-overdue notice.

"I've gotten famous in my old age," Bahr says dryly, noting that he's given more than 50 interviews in recent months.

Those involved with American soccer know Bahr not only for his role in the historic 1950 game, but also as a member of the 1948 U.S. Olympic team. He later coached at Temple and Penn State, guiding the Nittany Lions to 12 NCAA tournaments over a 16-year career. In 1976, he was named to the National Soccer Hall of Fame and is cited there as "one of the greatest American soccer players of all time." Bahr entered the National Soccer Coaches Association of America Hall of Fame 19 years later.

He retired from Penn State in 1988. Since then, like many older adults, Bahr — grandfather of eight — has watched more than his share of youth soccer games. Things were markedly different in his own childhood. A native of the Kensington section of Philadelphia, Bahr learned the game from the neighborhood’s English and German immigrants, who worked in the textile mills and brought along football — their football — from Europe, developing clubs such as the one young Bahr played for, the Lighthouse Boys Club. In stark contrast to today’s parents, Bahr’s dad — a textile salesman — never saw his son play.

"That was the way it was back then," Bahr says. "Kids played, parents worked."

The 1950 U.S. World Cup team, composed of former GIs and local club players, did both. Almost all of the team members had full-time jobs, and at least one top player was unable to compete in the World Cup because he couldn't get time off. As a teacher, Bahr was able to take the three weeks needed to travel to Brazil, where the 1950 tournament was held. Plus, he said, "We got paid $100 a week. That was double what I making as a teacher."

The team was selected and met in New York, where they played a touring team of British professionals, losing 1-0. The flight to Brazil had so many stopovers, Bahr recalls, that it took two and a half days to get there. Their first match was against Spain, another top team, and the Americans led 1-0 late in the game. Spain scored three goals in the final 10 minutes to win 3-1. Still, Bahr says, their strong showing against two top teams "certainly gave us a little confidence."

Facing England, widely acknowledged as the best team in the world, was another story. "Even our coach said there was no way we were going to beat these guys," says Bahr. That didn’t faze him or his teammates. "We had nothing to lose. We were 500-to-1 underdogs."

Luck — as well as pluck — was with the Americans when they took the field before a crowd of 10,000 in the city of Belo Horizonte on June 29. In the first 12 minutes, England had five shots on goal: Two hit the post, one sailed over the crossbar, and two were stopped in spectacular fashion by the U.S. goalie, Frank Borghi.

Then, as Lisi wrote in his 2007 book, History of the World Cup 1930-2006, "the unthinkable happened." Thirty-seven minutes into the game, Bahr launched a shot from 25 yards. Joe Gaetjens, a Haitian native who was studying at Columbia University, "dove headlong and grazed the ball for the stunning 1-0 advantage. On first glance, it appeared that Gaetjens had ducked to get out of the way. Had he headed the ball in intentionally or had the ball simply hit him and deflected into the net? No matter. The goal was valid … and the Americans were astonishingly ahead."

That’s the way it would stay. In the second half, the increasingly panicked English team kept pressing but couldn’t score. "Our goalkeeper had a good game," Bahr says with a shrug. "You have games like this in all sports. Sometimes the underdog wins."

Maybe, but this upset was so stunning that the first reports of the game were widely considered to be a transmission error on the newswires. Surely, a newspaper editor supposedly asked, the correct score was 10-1, in England's favor?

Although Gaetjens was carried off the field by jubilant fans that day, the Americans' World Cup came to an end on July 2 with a hard-fought 5-2 loss to Chile. Uruguay went on to win the cup in their own stunner — a victory over host nation Brazil in the finals.

The collective American yawn that greeted the team's upset over England continued when they arrived home. "The only one waiting for me at the airport was my wife," Bahr says. Not that he expected a brass band or, heaven forbid, the press (in fact, there was only one American reporter in Brazil for the World Cup, a loyal writer from the St. Louis Post-Dispatch, who paid his own way to be there). Soccer would remain a second-tier sport in America for decades to come. Only in 2005, with the release of a movie version of the great 1950 upset entitled The Game of Their Lives (the DVD version was retitled The Miracle Match), did people begin to realize that Walter Bahr had some sports significance beyond his role of fathering two NFL players — sons Matt and Chris, both kickers.

In the film, directed by David Anspaugh (whose other sports fairy tale films include Hoosiers and Rudy), actor Wes Anderson — best known for his award-winning portrayal of Annette Bening's teenage love interest in American Beauty — plays the role of young Walter Bahr.

To say that the real Walter Bahr hasn't gotten a swelled head over all this later-in-life attention is an understatement. Although he politely recounts the story of that long-ago day in Brazil yet again, he makes clear that as far as he's concerned, the past is the past. "You want to remember it; you don't want to live in it."

While he will not be in South Africa for this year's U.S.-England World Cup match, Bahr says he will definitely be watching. "Oh yeah," he says, emphatically. "And I’m not taking any phone calls that day."

Walter Bahr, star of the U.S. World Cup team that beat England in 1950 and former head soccer coach at Penn State, is reluctant to compare his team to the 2010 version, except to say that "we had players that were good enough to play on this team, in my opinion."

He is impressed with the current squad, though, and offers this scouting report: "They're well coached, well prepared, in good condition. The U.S. is solid defensively, and they have a couple guys that can make things happen on offense. I don't think there's any team in the tournament that would look at the U.S. as an easy win."

… as almost every team did in 1950, until Bahr and his fellow Americans proved them wrong.

John Hanc is a New York journalist whose latest book is The Coolest Race on Earth: Running the Antarctica Marathon.

You played soccer in high school or college. Or maybe you just watched your kids and grandkids play soccer and fell in love with the world’s most popular sport.

So are you too old to get back into the game — or get started?

No, says former Penn State coach Walter Bahr. "One thing about soccer, you adjust to any age. They have leagues for guys in their 60s, 70s and 80s. You play at your pace."

Granted, you might be about 30 or 40 years too late to learn the fine points of the game, but that's to be expected. "It's like baseball," Bahr says. "Nobody starts at age 20, because it takes a while to develop ball skills." But, he says, "you can still go out and play recreational stuff and have fun … at any age. Just make sure you're playing with guys at a similar ability level." (There are more senior women's leagues forming as well.)

At its most basic level, Bahr says, the game is simple enough, no matter what your age or experience. "You kick the ball this way, they kick the ball that way," he says. "Everyone has fun."

For more information on adult and 50+ soccer, including listings for regional league contacts, visit the website of the United States Adult Soccer Association: http://www.usasa.com/