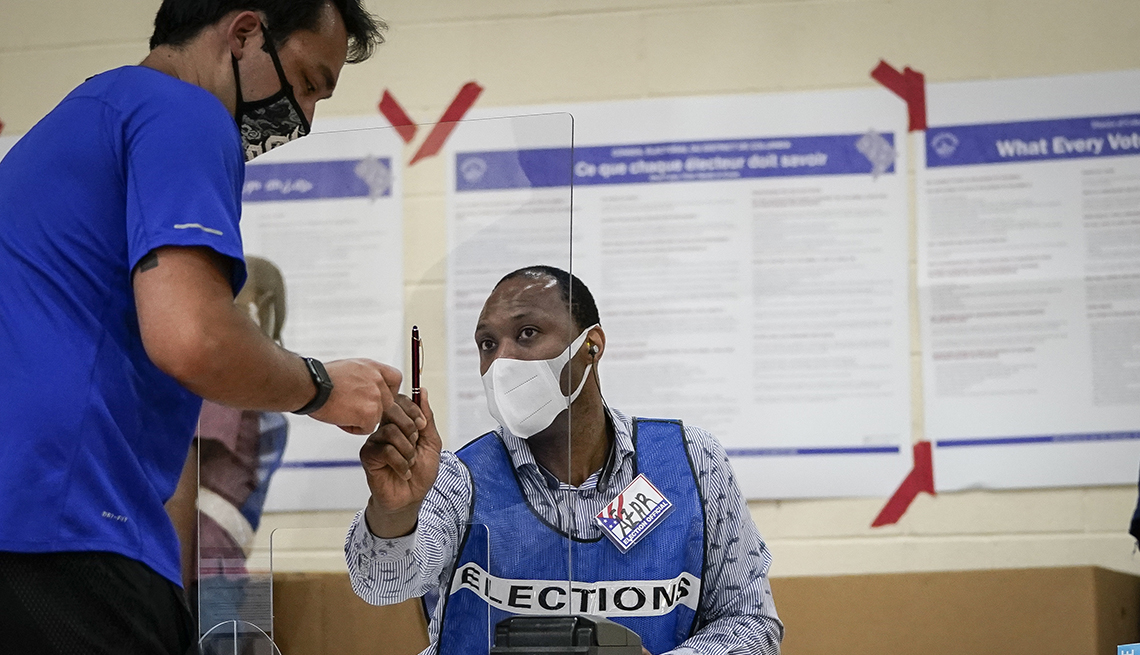 An election official wears a mask and sits behind a plastic barrier as he checks in voters at McKinley Technology High School in Washington, D.C.

En español | Voters in Delaware and New Jersey will go to the polls Tuesday to cast primary ballots. Delaware’s primary is solely for presidential candidates while voters in New Jersey will also select nominees for U.S. Senate and several congressional races.

The coronavirus pandemic has led election officials in these states to encourage more absentee voting, and because of the expected increase in these ballots, the results in some races may not be known for days.

In Delaware, officials expect a large vote-by-mail turnout as absentee ballot applications were mailed to people’s homes after an executive order by Gov. John Carney. Those who received their ballots but haven’t mailed them can still fax, email or bring the ballot to their county elections office before 8 p.m.

Registered Democrats and Republicans in New Jersey were sent absentee ballots while absentee ballot applications were mailed to unaffiliated voters. New Jersey voters can cast ballots in person until 8 p.m., but only about half of the polling places will be open and only people with disabilities will be able to use a machine. All others will be asked to fill out a provisional paper ballot.

Democratic National Committee (DNC) Chairman Tom Perez has called on states to move to increased voting through the mail or other methods that would not disenfranchise voters while protecting their health.

“As our country deals with the uncertainty of COVID-19, it is critical that states provide clarity and not confusion, which could lead to disenfranchising voters,” Perez said in a statement. “In order to ensure the voices of voters are heard, the DNC is urging the remaining primary states to use a variety of other critical mechanisms that will make voting easier and safer for voters and election officials alike.”

According to Perez, the easiest alternative would be for states to proactively mail ballots to all voters. “Additional tools include no-excuse absentee voting, whereby a voter can either drop a ballot off at convenient locations or drop it in the mail,” Perez said. “And, where in-person voting can still take place under public health guidelines, states should expand days and hours of early voting to reduce lines.”

Editor’s note: This story has been updated to reflect new information.