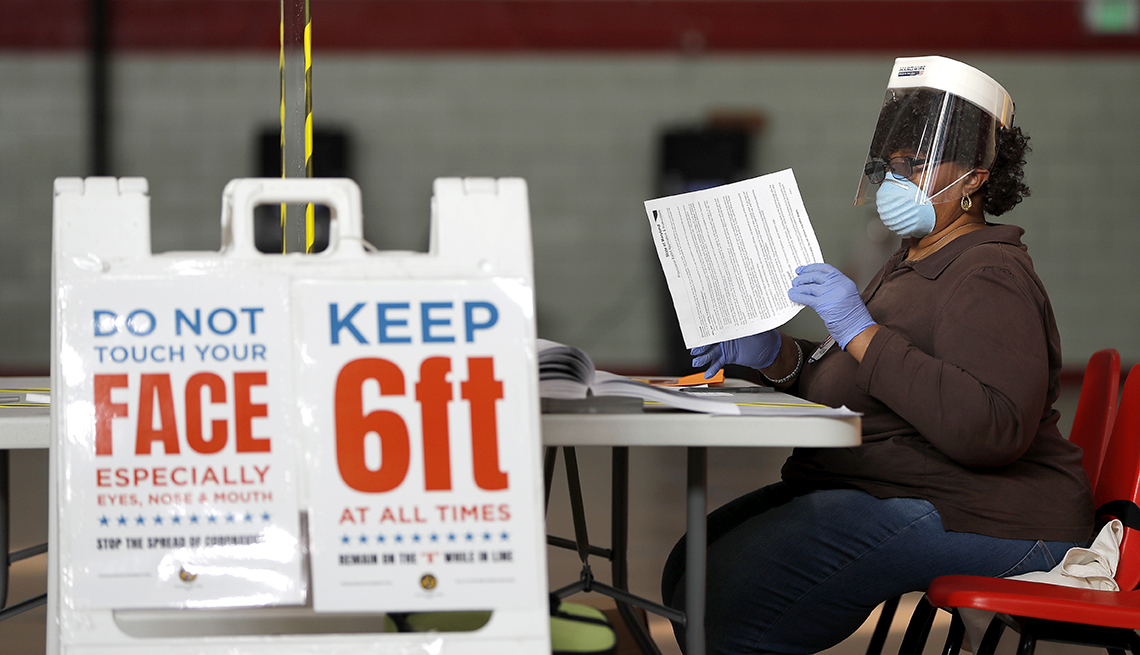 En español | For decades, older adults have been the backbone of American elections, consistently voting in greater numbers than any other age group. And by all appearances, older Americans were on track to be the top influencers again this November.

Then came COVID-19. Long lines at polling places in some of the early primaries and caucuses gave way — after the pandemic was declared on March 11 — to increased absentee balloting, tense in-person voting featuring face masks and National Guardsmen, and postponed primaries.

The pandemic has had a cataclysmic effect on Americans’ health, jobs, wealth and lifestyles. Will it also disrupt the most fundamental responsibility of citizens: voting?

"We will vote,” says Patricia Zaido, cochair of the Salem for All Ages initiative and a retired college educator in Salem, Massachusetts. “There is no doubt in my mind that we will vote.'’

Zaido, who is 80, remembers her grandfather, who immigrated to the United States from Ireland, taking her to the polling place as a little girl. “He instilled in me the importance of voting. So I guess it's in my blood."

Some political experts believe that most older voters would echo Zaido's sentiments. While the way we vote might change, they say that turnout will continue to be strong and Americans age 50-plus will maintain their position as powerful decision-makers. Others caution that the pandemic could dampen turnout, depending in large part on the breadth and expanse of new coronavirus infections this fall.

Charles Stewart III, a political science professor at the Massachusetts Institute of Technology, believes that the ongoing drumbeat of news conferences by politicians on both sides of the aisle — from the White House to governors nationwide to even some mayors — will bring home to voters how their elected officials affect their daily lives and may even boost what was already going to be a high turnout in November.

"I certainly think potential voters or voters are recognizing that it's important who their leaders are,” Stewart said.

Not that many people need extra motivation to vote this November. “This is an extremely important election, and people on both sides have strong feelings,” says Glen Bolger, a partner at Public Opinion Strategies, a Republican polling firm. “I think that older voters are going to find a way to register their opinions, whether or not it's in person."

But public opinion polls taken during the height of the pandemic reveal that many Americans are worried about the impact the health crisis will have in November. In one April poll, 67 percent of voters 50 and older said they were concerned about COVID-19's effect on voter turnout.

"At this point, my gut tells me we'll see a net negative impact on turnout,” says Tom Bonier, a Democratic strategist and CEO of TargetSmart, which conducted the survey.

How we will vote

Neil McCallum spent 15 1/2 hours working at his Madison, Wisconsin, polling place during the state's primary, one of the few elections that wasn't postponed this spring.

"I have to say, I felt very safe there,” says McCallum, a retired architect and volunteer state coordinator for AARP's Driver Safety program. McCallum, 71, says city workers fashioned a 6-foot plexiglass shield that separated voters who were checking in from poll workers wearing masks. Voters were also able to vote curbside. And the volume of voters was manageable; of the 1.55 million people who voted in Wisconsin's primary, nearly 1.1 million cast absentee ballots by mail, data shows.

In March, AARP asked over-50 voters what one thing matters most when voting for a candidate. Their answers: 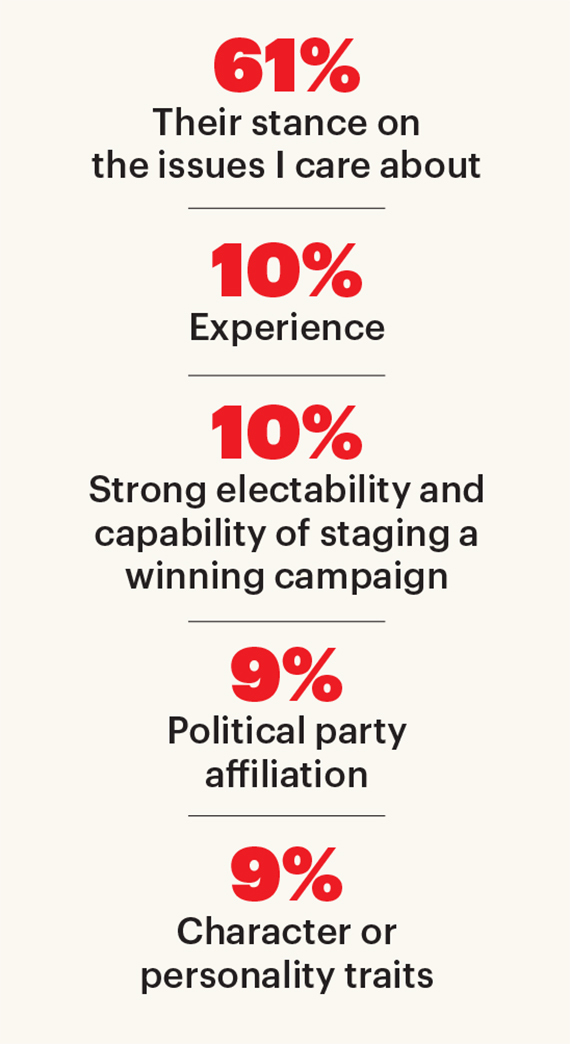 McCallum believes that if election officials can work out the kinks by making it easier to satisfy the state's voter ID requirement, even more people will vote without having to leave their homes.

Advocates from both parties have been debating how much to expand the use of voting by mail. Some say it's needed to protect people's right to vote. Others suggest such a system would foster voter fraud.

According to a study by researchers at Stanford University, “claims that vote-by-mail fundamentally advantages one party over the other appear overblown.” Colorado, Hawaii, Oregon, Utah and Washington state have full vote-by-mail elections, while three states — California, North Dakota and Nebraska — allow counties to opt for voting by mail. The study found that voting by mail “modestly increases participation while not advantaging either party."

While only a few states automatically mail ballots to their voters, every state provides for absentee voting. Two-thirds of U.S. states do not require the voter to give a reason for requesting an absentee ballot; one-third require an excuse. Experts believe states will accept concern over the coronavirus as a legitimate reason to request an absentee ballot. Forty states and the District of Columbia also conduct early voting, which allows people to vote when lines are minimal.

On the campaign trail

Experts suggest that the pandemic could dramatically change the tenor of this fall's campaigns.

"Campaigning is going to be more virtual,” says veteran Democratic pollster Celinda Lake. She predicts that there will be more early television ads and that voters will rely on “trusted sources and trusted friends” for their information. The practice of canvassing — going door to door to persuade people to vote for a specific candidate or urging them to vote — may not be in play this year. “People are not going to be opening their doors,” Lake says.

Big rallies and selfies with candidates may also go by the wayside, experts say. “How many babies will go unkissed?” Bolger asks.

How much, if any, face-to-face campaigning happens this fall will depend, experts say, on the status of the pandemic after Labor Day, when campaigning traditionally ramps up.

Experts also say that campaigns are having to find new ways to raise the money they need to communicate with voters. Fundraising dinners and happy hours — where donors get to hobnob with candidates and have their pictures taken with politicians — have just not been happening.

Tim Lim, a digital campaign strategist based in Washington, D.C., says many campaigns are becoming creative about fundraising. “They're using Zoom, they're using Google Hangouts to create those kind of intimate events,” Lim said. “And some campaigns are trying some new, wacky, fun things, like trivia nights and bingo online, to try to get people to donate."

Campaign operatives had already predicted that this election would see more virtual communication than ever before. Now, experts say — especially when it comes to some older voters, low-income citizens and people in rural areas who may not have access to the full range of devices — traditional television advertising may well rule the day. And that could make campaigns even more expensive.

"The biggest cost for campaigns by far is TV,” says Elizabeth Doyel, an Austin, Texas-based political strategist with Superior Blue, a direct-mail firm. “Absent the ability to knock on doors or hold rallies, candidates will need to pour more money into television, phone and direct mail.”

Lim believes the already big influence of 50-plus voters could be even more pronounced than usual in 2020: “For older Americans, voting is muscle memory. Older voters excel at voting by mail. So I think older Americans are going to decide who is the next president of the United States." 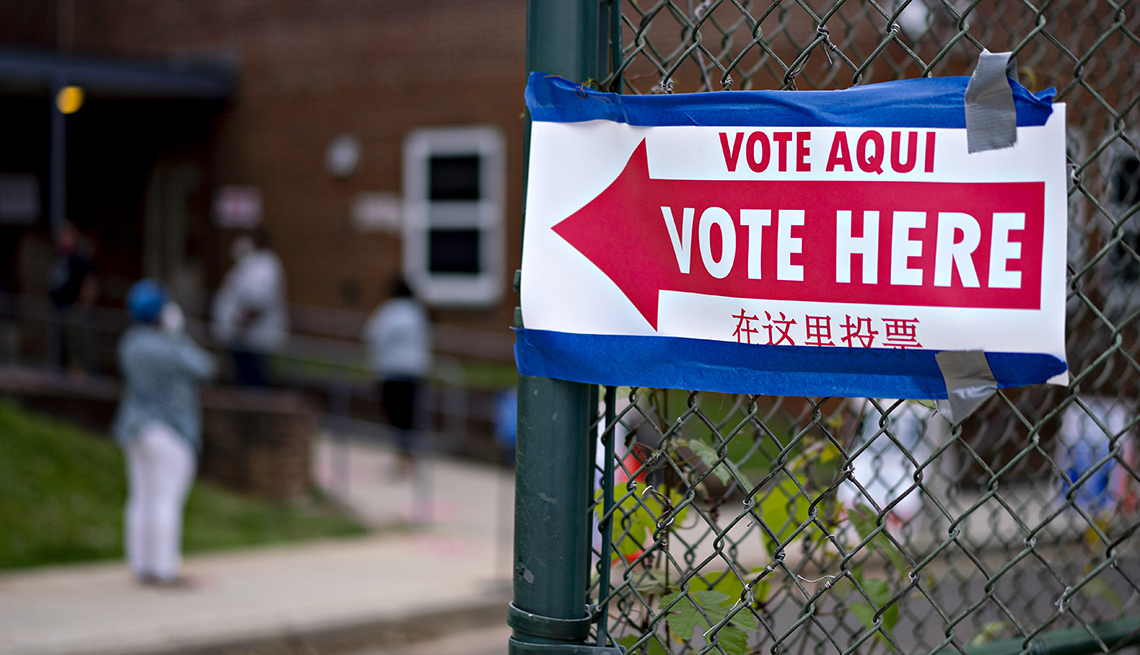 It won't just be the president faced with rebuilding a ravaged economy and restoring faith in government and social systems after COVID-19 passes — or with handling a second wave of illness. Many of those decisions will be made by people running for state-level offices and those chosen to represent us in Congress.

In November, voters will elect the entire U.S. House of Representatives, about one-third of the Senate, 11 governors and thousands of state legislators in 86 chambers across the country.

The results of some races will have long-lasting impacts. Next term's U.S. senators might confirm one or more Supreme Court justices. State legislators likely will oversee post-census redistricting that could change the balance of power for the next decade.

But one thread running through the races is the differing views of the parties on the role of government as the country rebounds from the pandemic, say Larry Sabato, director of the University of Virginia Center for Politics, and Christina Greer, associate professor of political science at Fordham University. Will new leaders support the growth of telemedicine, nursing home reform or health care research?

Here's a look at what is at stake in November.

Each party currently controls one side of the U.S. Capitol: Democrats have a majority in the House, and Republicans have the edge in the Senate, where races in Maine, Arizona, North Carolina and Colorado are among those expected to be most competitive.

Two Supreme Court justices are in their 80s. The question of who will nominate and vote on their replacements (once they or other justices retire) looms large in the presidential and senate races. (The Senate approves high court as well as lower–level federal judges.) “Presidents and senators will come and go. The court will be there 30 or 40 years,” Greer says.

The pandemic has pushed governors to the forefront of public attention as they sometimes clash with President Trump over the balance between stopping the spread of the virus and getting the economy back on track. Republicans now control about 60 percent of the state legislative chambers, according to the National Conference of State Legislatures. State legislatures and, to some extent, governors will have a long-term impact if they can rework federal and state legislative districts in ways that boost their party's political power for the next 10 years.