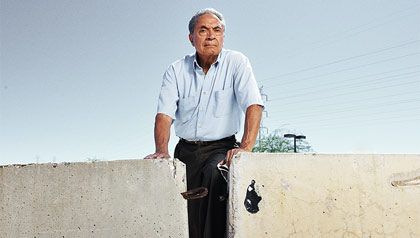 Roberto Reveles, board president of the American Civil Liberties Union of Arizona.

En español | “I’ve never been reluctant about pushing doors open,” says Roberto Reveles, 79. After 24 years as a top congressional staffer for five lawmakers and 12 years as vice president for a gold mining company, he’s pushing harder than ever. Two years ago, in his so-called retirement, he became the American Civil Liberties Union of Arizona’s board president.

It’s mid-afternoon on another blistering summer day. Reveles is in his white SUV heading to a meeting in Phoenix with Democratic activists from Pinal County and the state’s Democratic Party director. He makes the 45-mile one-way drive often. Meeting details and participants may differ — sometimes it’s Republicans at the table — but not the theme: empowering the historically marginalized.

Today’s focus is a local sheriff who meeting attendees say is demonizing undocumented immigrants to further his political career. The issue of scapegoating Latino immigrants propels Reveles to action.

“What’s disappointing is how regressive we’ve become in Arizona and in other states with regard to the presence of immigrants among us,” says Reveles. “But I’m hopeful. I really see this as a moral challenge.”

It’s a challenge he embraces. In 2010, he helped plan boycotts aimed at pressuring Arizona businesses to oppose a new state law that enacted some of the most restrictive anti-immigrant policies in the nation’s history. (Some of the law’s provisions have been found unconstitutional, but the state is appealing those rulings.)

And in 2006 he led one of the largest marches in Arizona’s history, a protest against proposed federal legislation that would have, among other things, made it a felony to be an undocumented immigrant.

Undaunted by negative rhetoric and what he considers draconian legislation, Reveles continues spotlighting immigrants’ contributions in Arizona. He also sees parallels between those immigrants’ struggles and his own while growing up poor — the son of Mexican immigrants — in the small segregated mining town of Miami, Arizona.

Next: From a segregated school to a public service career in Washington, D.C.

Reveles remembers being forced to attend what he describes as a segregated “Mexican” school based strictly on skin color, while some of his light-complexioned family members attended the better-equipped “American” school. The town’s segregation policies touched every realm of life. “The Mexican kids were allowed to swim in the local YMCA pool [only] on the day before it was to be drained and cleaned,” he recalls. And going to the movies meant sitting in the balcony designated for Latinos, who were not allowed on the main floor.

Those experiences fueled Reveles’ desire to succeed. After joining the U.S. Air Force, he leveraged his military experience and connections to get into the Georgetown School of Foreign Service. He went on to have a distinguished 24-year public service career in Washington, D.C., and 12 more years in the private sector, before retiring in 1992.

On Capitol Hill, he made time to press for more opportunities for minorities to serve in Congress and at the U.S. State Department. “He’s always been very driven, no-nonsense and very fair,” says Mucio Carlon, a Tucson financial adviser who worked with Reveles on U.S. Rep. Morris K. Udall’s (D-Arizona) staff. “He’s not much different now.”

In addition to being a member of the ACLU, Reveles is a long-standing member of the Arizona Hispanic Community Forum — where he got his start in the immigrant rights movement — and volunteers with Humane Borders, a group that places water containers in the desert along the U.S.-Mexico border.

Reveles mentors other young activist leaders, including Alessandra Soler Meetze, ACLU of Arizona executive director. His lessons come from real life, says Soler Meetze, noting the time he stood before a hostile crowd of business leaders and told them to listen to boycott organizers if they wanted to craft an effective alternative for the issue at hand. “He can work a room with any crowd,” she says. “But he’s not going to compromise his principles for the sake of politics.”

Perhaps there is one compromise he’s made for the sake of social justice: He’s put his passion for art on hold. Reveles is an accomplished artist whose work has been in various exhibitions, including one at Levi Strauss & Co. in San Francisco and another at the Phoenix Art Museum. But one look at his busy schedule and it’s easy to discern why he’s found little time to pursue his hobby as a representational sculptor. The 1,000-square-foot studio he built in his home in preparation for retirement seems in semi-retirement itself.

Despite the challenges, Reveles is heartened by the positive changes for Latinos and others seeking social justice. “I see a lot of good constructive change, such as the participation of Latinos in the civic life of our country,” he says. “That bodes well for the future.”

A better future for some immigrants could come sooner than Reveles might have expected. In August, the Obama administration changed its deportation policy to aggressively pursue only immigrants who have criminal backgrounds or pose security risks. More than 300,000 cases will be reviewed, and some undocumented immigrants will receive the opportunity to apply for work visas “Depending on how it’s administered,” says Reveles, “this is a step in the right direction.”

You may also like: A PBS documentary on the Longoria affair.