En español | Zulema Lopez, 12, begins her days at 4:30 a.m. She wakes up, gets dressed and goes with her family to the onion fields of south Texas. There, wielding a pair of oversized scissors, she picks onions, trims away the roots and stems, and tosses them in a bucket — row after row, bucket after bucket.

The days are long, temperatures often hover around 100 degrees, and Lopez, who is torn between a desire to help her family and disdain for the work, sometimes rebels.

"I stop picking crops and I just lock myself in the truck for hours, and I think, 'Maybe I should stop this and do my work for school,'" she says.

See also: A harvest out of reach. 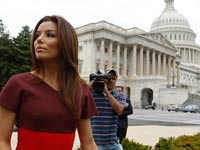 "The Harvest exposes the blatant exploitation of children who work in U.S. agriculture and feed America." — Eva Longoria

Lopez is one of three children featured in The Harvest, a documentary tracing the lives of migrant children and their families as they travel from Florida and Texas to pick fruits and vegetables farther north.

The Harvest "exposes the blatant exploitation of children who work in U.S. agriculture and feed America," says actor and activist Eva Longoria, executive producer of the documentary. "It's a sad fact that those who feed the most well-fed nation in the world often go to bed hungry."

Director U. Roberto Romano intersperses the children's stories with harsh facts about the plight of working in agriculture: An estimated 400,000 children work up to 14 hours a day, seven days a week; the average farmworker family earns less than $17,500 a year; there is no guaranteed minimum wage or overtime; and early and persistent exposure to pesticides can pose serious health risks.

Romano, who directed Stolen Childhoods, about child labor around the globe, and The Dark Side of Chocolate, about the West African cocoa trade, spent three years interviewing 30 children, visiting 24 states and traversing 75,000 miles to make The Harvest.

"You see the hardscrabble life," he says. "You see the insecurity, you see how difficult it is. You see the uncertainty, and it just makes you wonder that in America today we still allow this to happen to our own children."

In addition to depicting the daily strain of working in the fields, The Harvest looks at the toll farm work takes on a child's education.

"I feel like I'm left behind other people," says Lopez, "like I don't even think I'm going to make it to high school or anything." The children are often away from home for six months a year, meaning they start school late and leave early. They may attend school while they're away, but the nomadic nature of migrant farm work and long work hours — an average of 30 a week — make it difficult to keep up.

"Imagine entering a school that started in August, and you're starting the end of October," says Julia Perez, the film's associate director. "And then you leave early in April to follow the harvest." Studies show, she says, that when children change schools, they fall three to six months behind. The dropout rate for farmworker youth is four times the national average, according to Human Rights Watch.

Perez, who started picking strawberries when she was 5, managed to attend college. She became an electrical engineer and now sends monthly checks to her parents, who no longer work in agriculture. "I showed my parents that an education pays," she says.

But Perez defied the odds.

"Many of the children," Longoria says, "are stuck in a cycle of poverty because of their obligations in the field [and] to their families, and many of these children are not able to break that cycle because they don't have the chance or opportunity."

The creators of The Harvest hope the documentary will help spur change. At a June 2011 press conference on Capitol Hill, Longoria, along with a broad coalition of activists, touted a bill that would change archaic labor laws that date back to 1938, when family farms were more common.

Under current law, children who work in agriculture are allowed to work at younger ages, for longer hours and under more hazardous conditions than children who work in other industries. The new bill, known as the Children's Act for Responsible Employment, or CARE, would provide those who work in the fields with equal protection.

"Agriculture is one of our country's most dangerous occupations," says Rep. Lucille Roybal-Allard (D-California), the bill's sponsor. "Yet it is the only industry in the country where our children are not equally protected by our child labor laws." The CARE Act, she says, "would end the double standard," eliminating provisions that allow children ages 10 to 13 to work in the fields and placing tighter restrictions on those who are 16 and older.

Advocates call the bill a first step in protecting hundreds of thousands of children who are exposed to the same kind of hazardous conditions as children in much less developed countries.

"People in agriculture have endured substandard wages and substandard treatment and substandard lives for so long to pick the food that we eat," Romano says. "We as a country to this day spend the least amount of our disposable income on food, so I want to know: Are we continuing to expect children to pick our food so that we can eat cheap?"

The Harvest, produced by Shine Global in association with Globalvision, Inc., and Romano Productions, will be released in theaters in New York and Los Angeles in late July and early August, on Epix on October 15 and on Discovery's Planet Green in 2012.