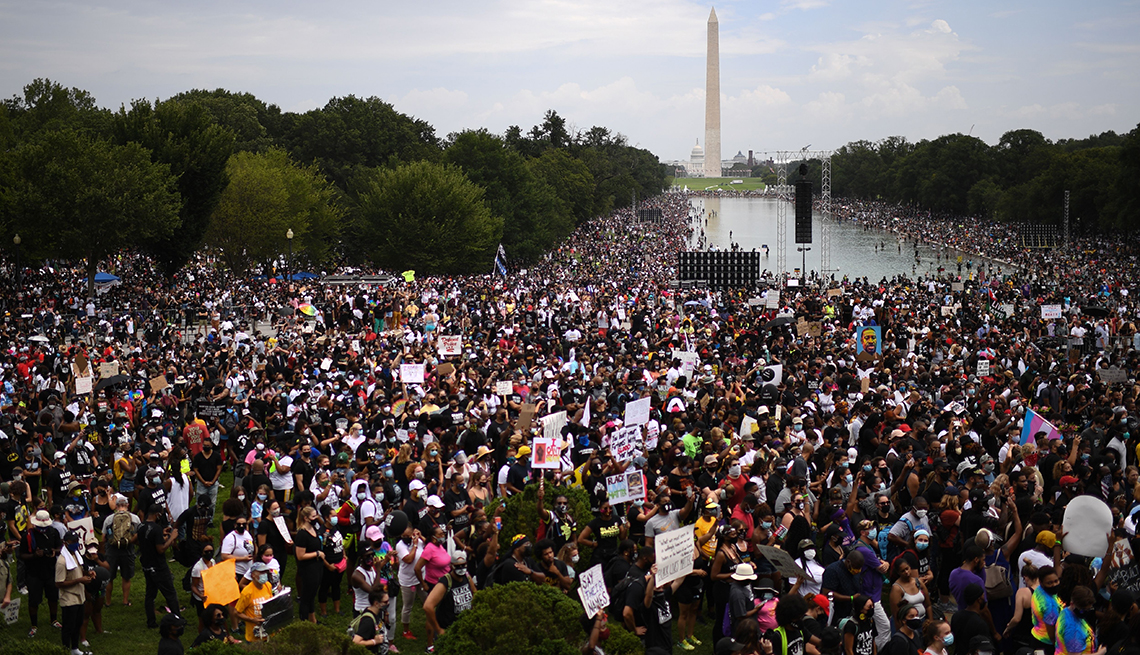 Despite pandemic restrictions requiring a two-week quarantine on visitors from 30 states, tens of thousands of civil rights advocates arrived in Washington, D.C., to participate in a Friday march that was meant to invoke the spirit of Martin Luther King Jr.'s “I Have a Dream” speech, delivered 57 years ago on the steps of the Lincoln Memorial.

The first March on Washington, on Aug. 28, 1963, originally was planned to call attention to economic inequalities. Its goals expanded to urge passage of the Civil Rights Act, racial integration in public schools and legislation against job discrimination.

King, whose speech became a lasting memory of the day, set aside his prepared remarks as the 10th speaker on a three-hour program when gospel singer Mahalia Jackson called out to him during his talk. “Tell them about the dream, Martin! Tell them about the dream,” she exclaimed, persuading him to improvise much of the second half of what he said to the 250,000 people who attended.

This year, activists were calling for greater reform within the criminal justice system and for equality under the law, said Brenda Coles, president of the National Action Network (NAN) chapter in Richmond, Virginia. The nonprofit civil rights organization sponsored Friday's event, along with partners that included the Lawyers’ Committee for Civil Rights Under Law, Leadership Conference on Civil and Human Rights, NAACP, NAACP Legal Defense and Education Fund, National Coalition on Black Civic Participation and National Urban League. More than three dozen companies and other groups also participated.

"Fifty-seven years ago, Dr. King marched for jobs, freedom, economic equality and the end of racism,” Coles said. Today the deaths of George Floyd in Minneapolis, Breonna Taylor in Louisville, Kentucky, and others put the focus on reforms for police accountability as well. “That is what's important. It's that legislation leads to change, and that can then lead to reconciliation."

Robbie Williams, 67, traveled to the march from Covington, Kentucky, and told The Associated Press that attending was her way of “speaking to my children and my people. My message to my children is to stand up no matter what."

While many of the thousands of activists who came to this incarnation of the March on Washington were young, older people were also in the crowd. The majority of the members from the Richmond NAN chapter who traveled to Washington were some of the same activists who marched 57 years ago, Coles said.

"They're excited because they're seeing a change. And they feel they may not be able to see this again,” said Coles, who has been an activist for 39 years. “If it wasn't for our seniors, I would not know what I know today. They taught me. They pulled me up. They trained me."

Editor's note: This article has been updated with additional photos.