How to Be a Good Guest in Your Adult Child's Home

Especially during COVID-19, honor the house rules, communicate about preferences 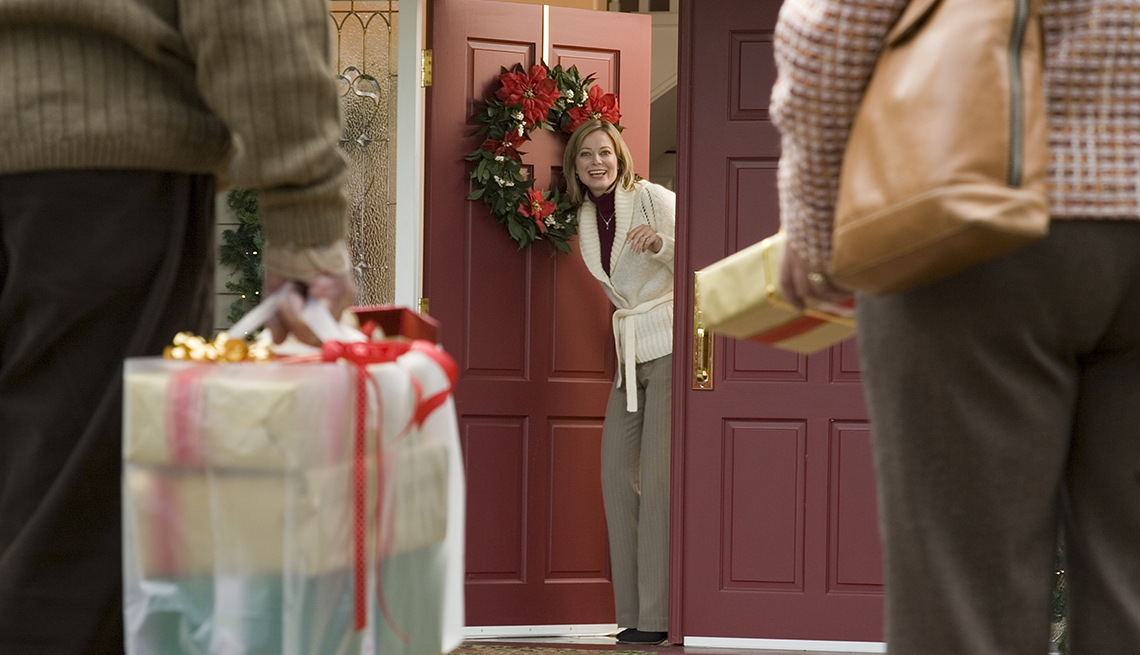 Imagine that the queen invites you for dinner at Buckingham Palace. Would you complain that the mashed potatoes are not as good as yours? Tell an off-color joke? Lecture everyone at the table on appropriate curfews for the kids?

Probably not. So during the holiday season, when togetherness is more precious than ever, it might be good to practice manners worthy of the palace if you are a guest in your adult child's home.

The pandemic adds a whole new layer. Many people are gathering with family again this year, despite the threat of the omicron variant, and may not have spent much time together in a while. COVID-19 continues to have many people on edge, and within families there can be different approaches to vaccinations, masking and testing.

As Diane Gottsman, founder of the Protocol School of Texas in San Antonio, puts it: Being a guest trumps being a parent.

"When you are the guest in someone's home, it's your responsibility and duty to be a gracious guest. That means making everyone comfortable,” she says.

Honor the house rules when visiting

Even royal family gatherings are complicated by traditions, emotional baggage and, when adult children host parents, by the role reversal of “my house, my rules.” But that makes it even more important to make things work, and as adults we should be up to the challenge.

So how do you meld the roles of parent and guest?

The first step is to “tame your ego,” says Jane Isay, author of four books about family issues, including Unconditional Love: A Guide to Navigating the Joys and Challenges of Being a Grandparent Today.

Isay, who has four grandchildren, ages 10 to 17, warns that entitlement can be poisonous. “If you think of yourself as somehow entitled to what you think [your children] should do for you,” she says, “it's going to be more problematic because they have their own needs and challenges.”

Once children have established their own families and households, parents need to honor the boundaries of their decisions “in the same way we didn't want to be told how to cook the brisket by our parents,” she says. “I think it's really important that we understand today's culture and don't apply how we behaved as the sole standard.”

The first step might be a chat before the holiday so you understand all the rules at your child's home, says S. Bear Bergman, a writer, storyteller and advice columnist based in Toronto.

He has three children ages 6, 11 and 26, and the household divides rules into “doing” rules and “saying” rules. For example, one “doing” rule is turning out the light when you leave the bathroom. In the context of family gatherings, any infractions of “doing” rules tend to be minor or temporarily forgivable. A “saying” rule focuses on how people interact, such as not saying “shut up” to each other or not telling ethnic jokes or using homophobic or gender slurs. It's up to guests to recognize those boundaries, he says.

"It's important that people are able to assert the culture in their own house regardless of who their guest is,” he says.

And remember that change is not a repudiation of family tradition, or meant as a personal attack on the way your own generation did things. Sometimes, change is just for the fun of trying something new, Bergman says.

"Just because there aren't sweet potatoes doesn't mean everybody didn't love your sweet potatoes. It doesn't mean that your way was a bad way and secretly nobody liked it for 20 years. It just means we are trying something new now,” he says.

Enjoy the idea that your children are proud of their home and want to show if off, says Phoukham Kelly Bounkeua, a Seattle-area psychotherapist. “They want your approval and your love and acceptance and [make] sure that's what you bring,” she says.

If it helps you to avoid pointing out things you think are wrong, approach their home as you might a new culture, she says. “Observe as if you're a scientist for the first time, seeing your children with a different eye of acceptance of them as adults and what they're doing with their family."

And if all this is just too hard, or there's too big a gulf between family members or a dispute over pandemic safety rules, then this might not be the time to solve it. Stay home. COVID-19 is the perfect excuse.

"If you really have a complaint about how your child is choosing to live their life … don't go there,” Bergman says. “Don't make everyone miserable and don't stress everyone out by showing up and being a bully about it.”

Tips from the experts on being a gracious guest

1. Talk before the visit about any concerns you have about food, house rules, COVID-19 restrictions or relationships.

2. Be a helper but respect how they want things to be done. If they don't want you loading the dishwasher, then don't.

3. Bask in your children's competencies and accept that they are trying to create their own household traditions. Give them space to work out the kinks. Be open to new ideas.

4. Not sure about a dish? Ask in a noncritical way that invites explanation: “Oh, I've never had this before; tell me about it.” Then, try it. At least a bite. Just as you told your kids to do when they were young.

5. Seek common ground. Post-dessert chat getting too political? Ask everyone to tell what makes them feel grateful or to tell a story about their favorite gift.

6. Bring a gift that reflects your host family's interests, not yours. And respect their boundaries on gifts for grandchildren.

Editor's note: This article was originally published on November 24, 2020, and has been updated with new information.

7 Questions to Ask While Planning for Holidays During the Pandemic

Here's how you and your family can stay safer

A Thanksgiving Checklist for Holiday Prep Will Ease Stress

Clean out the fridge, make dessert ahead, set your table early to create a relaxing celebration

Holiday Shipping Deadlines for USPS, FedEx and UPS in 2020