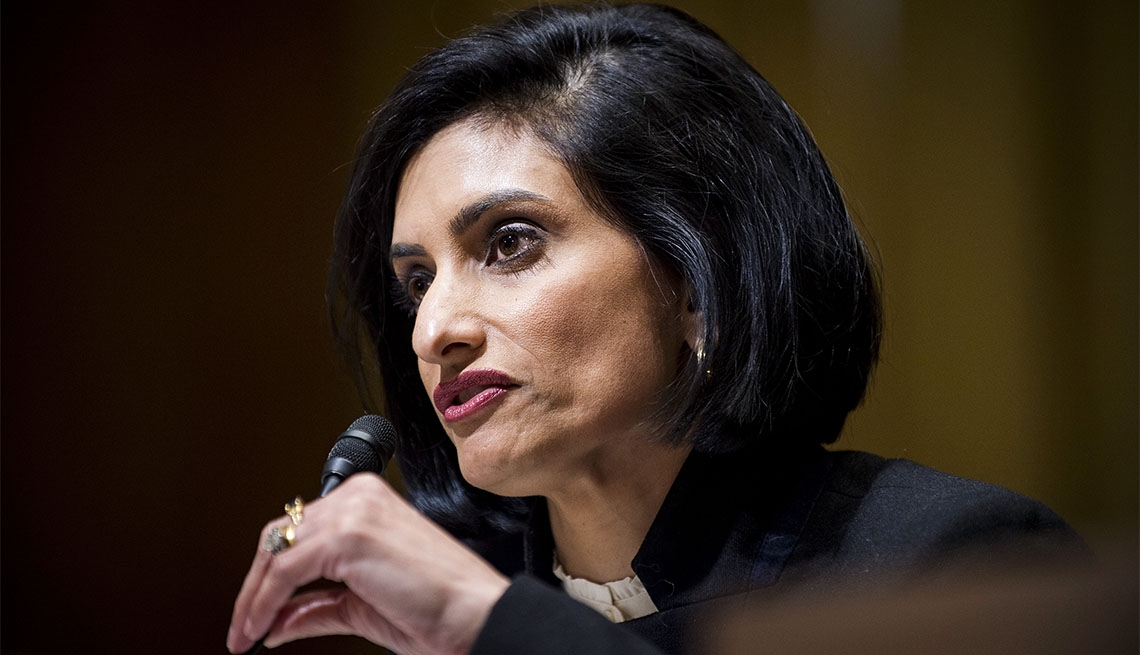 En español | As administrator of the Centers for Medicare & Medicaid Services (CMS), Seema Verma plays one of the most important roles in deciding how more than 130 million Americans get health care. She directs the planning, coordination and implementation of Medicare, Medicaid and the health care exchanges of the Affordable Care Act (ACA), programs that make up almost a third of the federal budget and provide care for some of America’s oldest, sickest and poorest people.

In an interview with AARP, Verma talked about her vision for Medicare and Medicaid, prescription drug prices and her views on the Affordable Care Act.

What is Medicare’s future?

What we want to do is make sure that the program is sustainable over the long term. That doesn’t mean that we’re trying to ration health care. We want to modernize it and make sure that patients have access to the latest technology and innovation.

Will the eligibility age for Medicare be raised in the next decade?

Would that evolution include a raised eligibility age?

I don’t have a strong, fast, definitive answer on that, but I think that we’ve got to figure out how to make this program work in a more sustainable way.

Will both original Medicare and Medicare Advantage plans — in which beneficiaries get all care through a private health network — be here for the long term?

For me, it’s very important that patients always have choices. That being said, I think the way the Medicare Advantage [MA] program is evolving is becoming more and more attractive to patients. The recent move that we made around allowing more supplemental benefits and giving plans the ability to target benefits, I think is really critical. Maybe they need a ride to the doctor’s office or some nutritional support or a ramp to help prevent falls. The ability for MA plans to have that flexibility and offer more benefits, I think, [means] that there is going to be an attraction for Medicare beneficiaries to pick that type of plan.

Shouldn’t those on original Medicare get those extra services?

What can CMS do to make it easier for Medicare beneficiaries to appeal a coverage determination, especially when it comes to Medicare Advantage plans?

AARP members are concerned about fraud and abuse in Medicare. What can your agency do to combat that?

I don’t think that we are leveraging all the possibilities. Some of the things that I think we want to be able to do are some of the moves that we’re making around empowering patients and giving them more information about cost and quality in their health care record. I think that’s about the partnership that we have with beneficiaries. They can help us on fraud and abuse. They understand what’s being charged, and we can continue to work with them. You’re going to see us put more out on that to try and strengthen that process.

How can the government help lower prescription drug prices?

I don’t think there is a silver bullet. What we know does work are competition and negotiation. When there is competition, you do see the cost of drugs go down. That’s what we’re doing in Part D — giving them more tools so that they can drive down costs.

AARP has fought to have Medicare bargain directly with pharmaceutical companies. Are you for that?

We [already] hire negotiators on our behalf. Those are the Part D plans. And they’ve actually been doing a pretty great job. If you look at the Part D premiums, they’ve been relatively flat­. They’ve actually gone down in the last couple of years. If the government starts negotiating directly, there’s not going to be a lot of choices [because there will be one master list of drugs that are covered, called a formulary].

The Veterans Health Administration negotiates directly for its prescription drugs. Why can’t Medicare?

They have one formulary. They’re not offering all the different medications. There aren’t choices. When it’s the government doing [the negotiating], there’s no competition and you have the government making decisions — not individuals, not patients.

What can you tell us about the status of the Affordable Care Act?

This year what we saw for the very first time was rate stability. And in some cases, we saw that the rates actually went down by 26 percent.

We hear from AARP members that they want to live out their lives at home, not in a nursing home, if they can help it. But it’s still harder to get home- and community-based services than it is to get institutional care. Can that be changed?

I think that’s a goal that we all have. We’re all going to be more comfortable in our own homes. Some of the moves that we made in Medicare Advantage with supplemental benefits are aimed at creating independence, quality of care and quality of life. We’re going to continue to work with states to make sure that home- and community-based care works well and that it’s a fruitful option for beneficiaries. Ultimately, the states have to figure out what’s going to work best for their communities.

The government is spending less to inform people of the availability of ACA health insurance. Do you support that?

You can have all the advertising in the world, which is what we had with the previous administration, but enrollment actually went down because when plans are so expensive, people aren’t going to want to purchase them. What we’ve focused on is making sure that people have choices of health plans and lower costs. I think we’re making progress. It’s still not fixed. Some of the larger fixes are going to need to be made by Congress. 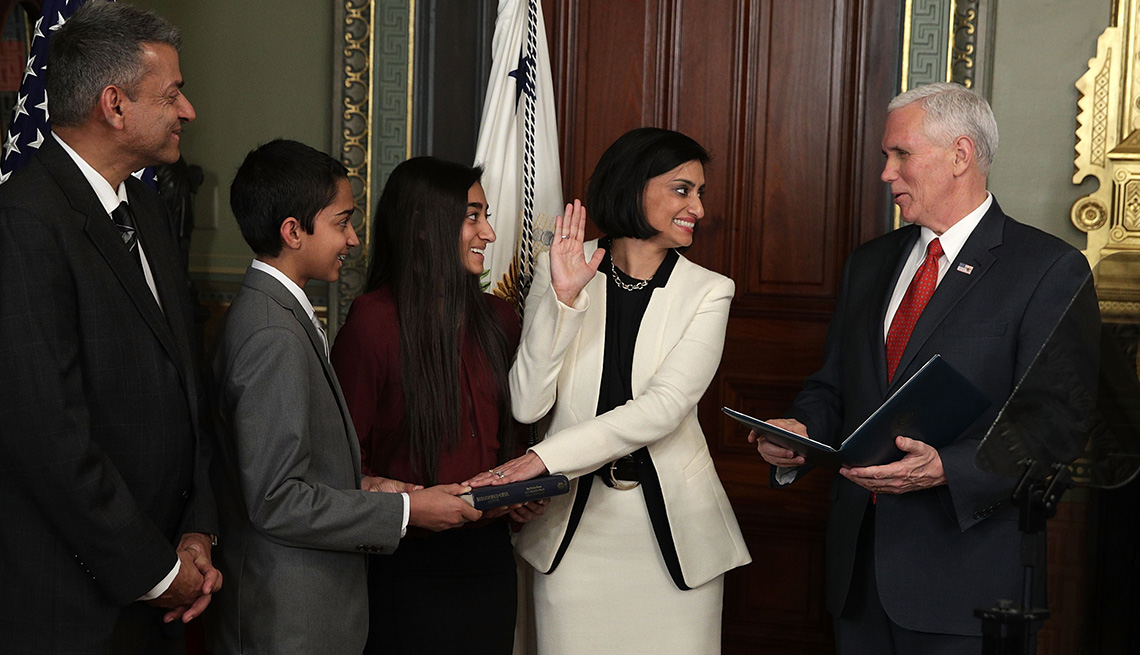 Seema Verma is sworn-in at a ceremony officiated by Vice President Mike Pence as her husband, Sanjay Mishra, and their children watch.

For Seema Verma, easy access to medical records is more than just something she believes in; it’s personal.

Just a few months after she became the CMS administrator, her husband, Sanjay Mishra, a child psychiatrist, and their two children were in the Philadelphia airport en route to their home in Indiana. Verma was in Boston, on her way back to Washington.

“My daughter called me, and it was that call you dread,” Verma said. “She said, ‘Mom, Dad is passed out.’ ” He wasn’t breathing, and the paramedics needed to know if he had any health conditions. It brought home to Verma how important it is that people have ready access to their medical history and records. “Luckily for him, by God’s grace, he collapsed at the feet of a woman who was a nurse.” That bystander began CPR, but Mishra had to be shocked with a defibrillator six times before he began breathing on his own.

"It's not fair to patients that they are often in the dark. It's their data. They should be able to have it."

The good news is that doctors figured out he had a heart blockage and fixed it. But the frustration didn’t end there. When Verma asked for her husband’s medical records to share with his physicians in Indiana, all she received was a CD that included only the heart procedure. “It was a real eye-opener,” Verma said. “It’s not fair to patients that they are often in the dark or not empowered. It’s their data. They should be able to have it.”

John Finnell, M.D., a board member of the American College of Emergency Physicians, wasn’t surprised to learn what happened to Verma’s husband. Most patients, he said, “aren’t aware that we don’t have access to other medical records.” Verma envisions a system that starts building a medical record for patients from the time they are born and that documents every care event. And it’s technology that people could carry around in their phones. “Doctors would be able to take that information and not have to repeat tests,” she said.

In states like Indiana, where Finnell practices, there are health information exchanges that give physicians access to the state’s medical records. The Strategic Health Information Exchange Collaborative includes 70-plus such state and city health exchanges, covering more than 200 million Americans. Verma said such databases “could really push the new generation of research coming out with more cures and more personalized treatment.”

More on Medicare and Medicaid