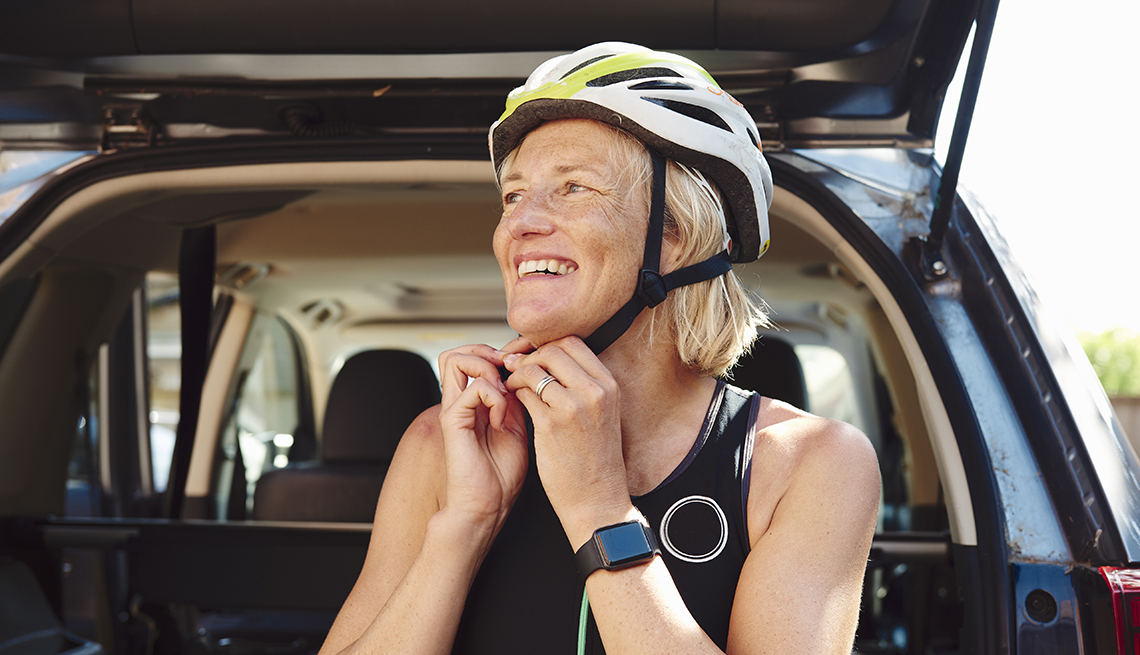 As a great way to exercise, get some fresh air and, lately, stay socially distant, biking is more popular than ever. But it also carries some risk. For older cyclists in particular, fatalities have nearly tripled over the past four decades, according to U.S. Department of Transportation numbers. In fact, the largest proportion of fatal crashes now occurs in people ages 35 to 54.

The surging popularity of electronic bikes, or e-bikes, has been its own risk factor in this age group. Data shows that e-bike owners tend to be in their 40s and up, and a 2019 study published in the journal Injury Prevention found that crashes involving the power-assisted, potentially higher-speed cycles were more likely to result in hospitalization and internal injuries for riders compared to traditional bikes. There may also be a false sense of security around these newer makes: One of the first surveys of North American e-bike owners found that the majority reported feeling safer riding an e-bike than they do with a standard one.

Given that the biking boom inspired by the pandemic shows no signs of slowing, and all the benefits of cycling — it's a carbon-free form of transportation, a family-friendly recreational activity, a great way to get in your daily recommended amount of moderate physical activity — it's a good idea for all riders to learn how to avoid becoming one of those statistics.

Plenty of advocacy groups agree that the first line of defense for reducing motor vehicle crashes involving “vulnerable road users,” a category that includes pedestrians and cyclists, is better infrastructure. That means roadways designed to accommodate bikes, which “don't have two tons of steel surrounding them, or airbags that inflate during a crash,” says Allison Dewey, education director for the League of American Bicyclists. During the pandemic, approximately 200 U.S. cities implemented changes to enhance the functionality of their streets and better accommodate increased outdoor activity, including bike lanes.

If your city didn't happen to be among them, you can still lower your risk by steering clear of rush hours and being alert at intersections, which accounted for 27 percent of cycling crashes. You may also want to stick to daytime rides, given that 50 percent of crash fatalities occurred in the dusk or dark.

"It's always safest to ride where you don't drive,” says Arleigh Greenwald, an avid cyclist and former bike shop owner. She recommends paths specifically designed for bikes, and which aren't accessible to cars, whenever possible. If you must travel in heavily trafficked areas, try to stick to roads with wider shoulders or those that have lots of stop signs.

Make sure you're following the rules of the road yourself, whether you pedal a traditional bike, an e-bike or even a recumbent style. “Bicycles are treated as vehicles,” Dewey says. “That means you have to ride in the same direction as traffic, signal your turns and lane changes, and obey all the other laws.” For a refresher, know that the League of American Bicyclists partners with more than 3,000 certified cycling instructors nationwide to teach its Smart Cycling curriculum, a great way to learn how to ride safely. Instructors cover topics such as how to shift gears, being aware of your surroundings and others on the road, riding in rainy or slippery conditions, and “avoidance maneuvers,” for when you need to change direction quickly (say, to avoid roadkill). “One of the best things a person on a bike can do is take a class,” Dewey says. “It makes you a more confident rider."

Outfitting yourself properly is important as well. Cyclists should aim to be as visible to motorists as possible; brightly colored clothing, reflectors and bike lights, even in the daylight, can help. A helmet is a must, preferably one that has been crash-tested. “Technology is changing pretty rapidly, and now you'll see lots of helmets with these little yellow stickers that say ‘Mips,'” says Barry Miller, who works in impact testing in the Virginia Tech Biomechanics Helmet Lab. He explains that the letters stand for “multidirectional impact protection system,” which allows the helmet to rotate while the head inside stays stationary, lessening the rotational impact to the head. Making sure your helmet fits properly is also important. According to Virginia Tech's helmet ratings guide, “cyclists should position the helmet's rim the width of one to two fingers above their browline, and tighten it to minimize movement of the helmet."

And one of the best things you can do, for your safety and enjoyment, is to ride with a friend. “For new riders especially, there is safety in numbers,” says Sara Studdard, director of local innovation for PeopleForBikes.