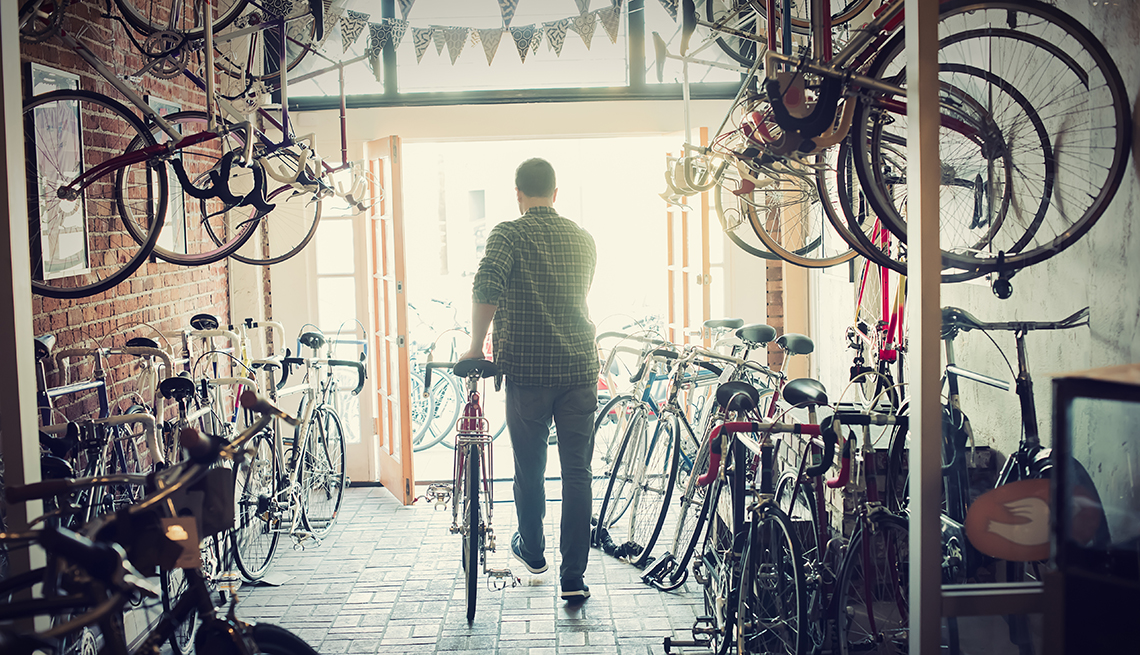 Thinking about getting a bike? Boy, are you not alone. Since last March, when sales shot up 50 percent over 2019, the bike boom hasn't slowed. “The sport has taken off since lockdown,” says Arleigh Greenwald, a former bike shop owner who now works in product marketing for Tern bicycles. “Shops are selling 10 times what they used to."

While you may never forget how to ride a bike, buying one can be a much different experience if your last purchase involved 10-speeds and banana seats. Bikes have come a long way, and the options can be overwhelming. Here's how to sort through them.

Start with the type of riding you plan to do

Do you want to hit mountain bike trails or use your bike to get fit? “A lot of people get into biking with this dream goal or bucket list item and end up with a bike that's not useful for getting around town,” Greenwald says. She advises focusing on the kind of activity you'll be using the bike for 80 percent of the time. You can always rent a bike for the occasional race or day of mountain biking.

Electronic or ebikes have been growing in popularity, says Greenwald, and can be a good option for people who are looking to commute by bike but are intimidated by distance cycling. Like a hybrid car, ebikes run off a battery (typically good for 30 to 120 miles) that charges in a standard household outlet and can boost your peddling power by as much as 20 mph. But they do cost more than your standard foot-powered bicycle.

Most recreational riders will do well with a hybrid bike, which is a multipurpose model that works well for commuting, running errands and riding to the park with your kids or grandkids. They also happen to be easier to maintain, durable and in a low to mid price range, says Medhi Farsi, cofounder of State Bicycle Company, whose approachable models cater to entry-level cyclists.

Know what's behind the price tag

Pricing varies a lot — think $200 to $20,000 — and one big factor is the frame material. Various grades of steel are at the bottom of the range — this is mostly what you'll find in big box retailers — followed by the lighter, more expensive aluminum alloy frames most bike shops carry. Carbon fiber and titanium bikes, which are usually reserved for performance athletes, start at $4,000 and go up from there. Mountain bikes also tend to be pricier, up to five times as expensive as road bikes due to their more rigorous suspension systems, says Greenwald.

While more gears used to be the standard by which a bike was judged, these days, it doesn't matter as much. In fact, if you live around pretty flat terrain and plan on biking less than 20 miles a day, Farsi says, a single speed bike like State's $299 core line can be a great economical option.

Among hybrids, there are still more options. “There are so many categories and subcategories that people can get lost,” says Bob Burke, co-owner of Guy's Bicycles in Feasterville, Pa. Hybrids, which Burke says are the most popular kind of bike he sells, were originally developed to be a cross between a 10-speed and a mountain bike, so you're seated in a more upright position compared to a road bike but the tires are thinner and the frame is more lightweight. But there's also a fitness hybrid, which is more agile with characteristics of a road bike, and dual-sport hybrids, which have more in common with mountain bikes.

Then there are comfort or cruiser bikes, the kind you see on the boardwalk, which usually have only a single speed, and whose fat tires, high handlebars, and wide, comfortable seats were designed for long, leisurely rides. (These may be a good pick if you live near a fairly flat and predictable route like a paved bike trail.)

Recumbent bikes, many of which have three wheels, are in their own category, and can be easier for people with balance issues, says Greenwald. They're popular with boomers, but again, cost extra and can be harder to find right now.

Yes, you should take it for a spin

The best way to decide what style is right for you, experts agree, is to take one for a test ride. “It's a very personal process,” says Farsi. You'll want to pay attention to anywhere your body makes contact with the bike — the seat, handlebars and pedals — and make sure they're comfortable. “The bike should glide in a nice, fluid motion with a few foot strokes,” says Burke. “Your back shouldn't hurt.” And give the brakes a try. Some models, mostly cruisers, have old-fashioned foot brakes that pedal backward; the rest are operated by hand but can be a rim brake or the more modern disc brake. The latter is an all-weather braking system that's more like a car brake and requires less of a squeeze to operate. It's also more expensive but, Burke says, it's not essential, especially if you're not focused on speed.

While you can find decent quality bikes at select outdoor outfitters, most typical large chains don't compare to dedicated bike shops when it comes to quality and the ability to guide you in your purchase. Some companies, like State Bicycle, sell direct to the consumer, but you won't have the opportunity to try out the bike. (If you can try out a friend's bike from such a manufacturer, you may be in luck.) Bike shop employees will also help you determine the right size frame for you. A lot of people don't realize that bikes come in different sizes, but selecting one that fits your height and adjusting it properly is important for a smooth ride. Bikes also don't come assembled when you order them online, but most bike shops will assemble it for you for a small fee.

Of course, with wait times of up to six months, you may not be peddling anywhere anytime soon. Used bikes are a good option, but Burke says you can expect to pay more given the high demand. Bicyclebluebook will provide a rough estimate of a bike's value based on the model and year. Doing your research and knowing the type of bike you want can help a lot, he says. And the sooner you get to a shop and place your order, the sooner you'll be able to enjoy all the benefits cycling has to offer: fresh air, fitness and fun.

People often forget about essential biking accessories when budgeting for a bike, says Greenwald. You probably want to add around $150 for the basics, which include:

Accidents happen — they're actually on the rise — but there's strong evidence that wearing a helmet lowers the risk of traumatic brain injury and death. To find a good one, consult the ratings from the Virginia Tech Biomechanics Helmet Lab in Blacksburg, Va., which partners with the Insurance Institute for Highway Safety to replicate crash conditions and determine the average number of concussions caused by various conditions. The difference between a five-star helmet and lower-rated ones can be as much as a 20-concussion difference, says Barry Miller, director of outreach and business development for the lab. Also, because the foam in most helmets is designed to be single-use and crush, crumble and break to absorb impact, it can degrade over time, which means you should invest in a new helmet every two to three years even if you haven't been in a crash.

An unfortunate side effect of the nationwide bike shortage is an uptick in bike theft. Bike Index, a bicycle registry, found that more than 96,000 bikes were reported stolen in 2020, a 24 percent increase over the previous year. Look for something sturdy.

"Anything with a thin cable is a joke, thieves can cut those with scissors,” says Farsi.

Properly inflating your tires is probably the single most important thing you can do to enhance your riding experience, says Farsi. Doing so will improve your performance and prevent flats. (Remember, there's no AAA for bikes, so unless you're also carrying a patch kit and know how to use it, you'll be stranded.) But so many people pump their tires once and ride for months without inflating again. Keep a portable pump handy and use it often.

Lights are another worthwhile safety measure, and they're not only for night rides. Like your car's daytime running lights, they make you more visible in traffic. You can find affordable waterproof options that charge via USB and have a quick-release (so you can take it with you as a theft-deterrent).