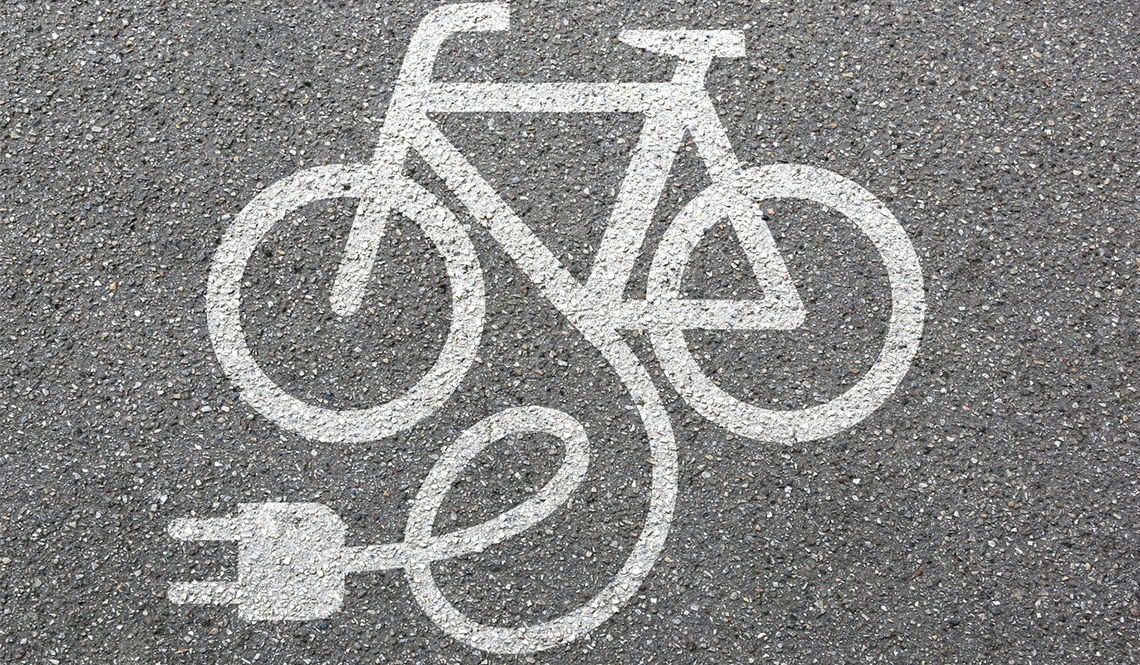 The "e" in e-bikes stands for "electric-assist."

I am huffing and puffing along a hilly bike path struggling to keep up with a rider who is 13 years older than me and under doctor’s orders not to exercise too aggressively after a recent pacemaker operation. I'm a hardy cyclist, who rides thousands of miles year-round in Minnesota, so who’s this guy — a championship bike racer?

No, he's Skip Humphrey, a former Minnesota attorney general and long-time, high-level AARP volunteer who was celebrating his 75th birthday the day we rode. What’s his secret: Humphrey rides an e-bike, which is a bicycle equipped with a small electric battery to boost his pedaling.

"For older people, e-bikes are the way to go," he says. "I believe it will give me another 10 years of biking. I still get a good work-out, but it's smoother, which is important now since I got the pacemaker. And it doesn’t beat up my joints. I know I would not be riding nearly as much if I just had a regular bike."

Far different from mopeds and motorbikes, e-bikes (short for "electric-assist") must be pedaled, do not exceed 20 miles per hour on most models, and are also silent and don’t spew exhaust. Humphrey, who got his first e-bike in 2012, says he can ride about 75 miles before the bike needs a recharge, which is easily done by detaching the battery from the bicycle and plugging it into an outlet in his home or wherever he happens to be. 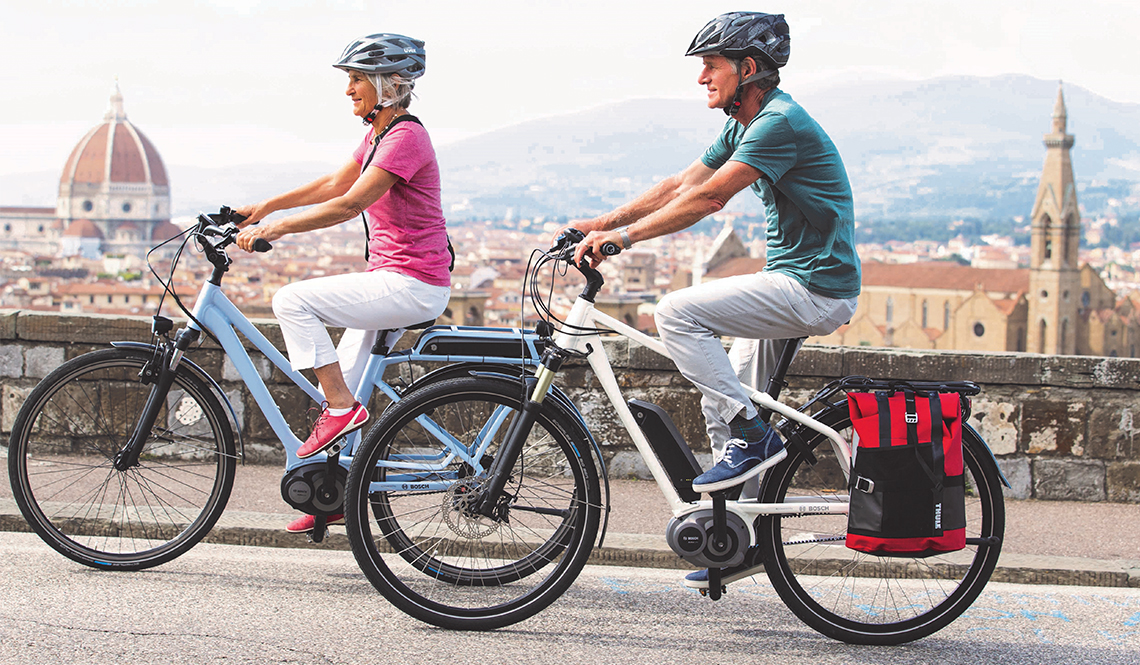 An e-bike looks just like a regular pedal bicycle.

"It's like someone gently pushing you," is how he describes the experience of riding an e-bike. That's how it feels at the lowest of the bike's three power levels. On a formidable hill or long ride, he ramps up the juice and other times turns it off to get extra exercise.

Humphrey rides most mornings on park paths and city streets near his home in suburban Minneapolis ("if it's above 15 degrees and not icy") and on weekends he explores the region's expansive network of bike trails with his daughter. Humphrey also jumps on his e-bike to meetings, the grocery store (carting up to five bags home with a trailer) or the local YMCA, where a young guy kids him about "cheating" with a motor on his bike. "Yes, I tell him, I'm cheating the wind. I am cheating the hills," he laughs.

No one ever called Dan Buettner a cheater when it comes to bicycling. He led a 12,000-mile cross-Africa bike expedition from the Mediterranean Sea to South Africa, and a 15,000-mile Pan-American trek from the North coast of Alaska to the southernmost tip of Chile.

Now in his late 50s, Buettner still travels the world exploring remote places where people live the longest for his series of best-selling Blue Zones books. And he rides around his vacation home in Santa Barbara, California on an e-bike.

"I bought a house high on a hill, and if I had to rely on just my regular bike I would ride it less to the coffee shop in the morning or to pick up a loaf of bread," Buettner explains. "You still pedal on an e-bike and get the physical activity, which I believe leads to longevity."

Using an e-bike allows Buettner to ride more often, he says, "because I am able to lure my non-bicycling friends to ride with me — like my girlfriend, who was definitely not a rider, but now she's loves using an e-bike and is talking about getting a road bike of her own. It's like a gateway drug for bicycling."

"E-bikes answer many of the excuses people have for not biking. Hills, long distances, sweaty clothes, hot weather, cold weather, not being able to carry things due to weight."

— Randy Neufeld, president of the SRAM Cycling Fund, which promotes bicycling in Europe and North America

About one percent of the 17.8 million new bicycles sold in the U.S. in 2016 were electric, roughly half of them bought by people of all ages who have bicycled little since their teenage years, says bicycle industry consultant Jay Townley. Around 30 brands are now available in the U.S., with prices beginning at $2,000.

By contrast, 6 million e-bikes were sold in Europe, accounting for a quarter of all sales in leading bicycle-using nations such as the Netherlands, Germany, Switzerland and Austria. Indeed, Germany is building bicycle highways as a solution to traffic congestion for trips of five to 15 miles. "They foresee e-bikes getting 10 to 15 percent of cars off the road on busy stretches of highway, saving billions of euros by not adding more car lanes," says Randy Neufeld, president of the SRAM Cycling Fund, which promotes bicycling in Europe and North America.

People over age 50 figure prominently in these plans. "It's becoming a demographic trend in Germany that older people will now ride longer distances because of e-bikes and these new bike highways," says Paul Steely White, director of Transportation Alternatives in New York City who has studied European bicycling policies.

"A lot of the concern is because people don't understand e-bikes. For the most part they don't go faster, they go easier. You have to pedal hard to get an e-bike to 20 miles per hour, and really hard to get to 28."

Bosch's research identifies baby boomers as the top market for e-bikes in the U.S. and Canada, with "better health" and "fun" as the biggest draws. Around 20 percent of older riders surveyed also use their e-bikes for commuting and 9 percent use them for trail riding and mountain biking.

Growing use of protected bike lanes in which bicyclists are physically separated from cars and trucks is encouraging more non-bicyclists to ride bicycles because they don't have to ride cheek-by-jowl with speeding motorists. But sharing bikeways with e-bikes raises safety concerns among some riders, who worry that slow pedalers will feel jeopardized by zooming battery-boosted bicyclists.

“Americans are living longer. So how are we going to stay healthy? Exercise is the number one medicine and riding a bike is one of the most enjoyable ways to do that.”

California, Arkansas, Tennessee, Utah and Colorado have passed laws to address e-bike safety issues, which many other states are now studying. Class 1 e-bikes (pedal assist) and Class 2 e-bikes (pedal with throttle) — which are limited to 20 mph by mechanisms on the machine — can be ridden on most trails and bike paths. Class 3 e-bikes (pedal assist), which can go up to 28 miles per hour, are restricted to roadways or to bikeways adjacent to roadways. Local communities are also free to set speed limits or ban e-bikes on any bikeway.

Sheila Paxton, who is in her 60s and lives Longmont, Colorado, says the e-bike she bought in 2016 has changed her life. A while back, a mild lung condition sidelined Paxton from her favorite pastime — vigorous bike trips through the Rockies.

"I found myself becoming isolated, biking alone rather than with my friends," she says. "But with the e-bike, I feel like a kid again. I can keep up with friends who are younger."

And Paxton has discovered an additional bicycling partner: Her septuagenarian husband, who found steep rides up mountainsides too much work until he tried an e-bike, says he’s willing to join her in tackling the Israel Ride, an eight-day trip from Jerusalem to Eilat, which Paxton has done solo.

"As long as I can get in the saddle, I will always be biking," Paxton declares.

Jay Walljasper, author of The Great Neighborhood Book, writes, speaks and consults about creating healthier, happier communities. He lives in Minneapolis and his website is JayWalljasper.com.