For years we've known that a good weight, a good diet and exercise can help men and women keep their hearts healthy. But cancer? That seemed to be a disease over which we had little control.

Now, emerging science is telling us that weight, diet and exercise play a crucial role in protecting us against cancer, too. Indeed, there are lifestyle changes we have the power to make that will improve our odds against this disease, researchers say. 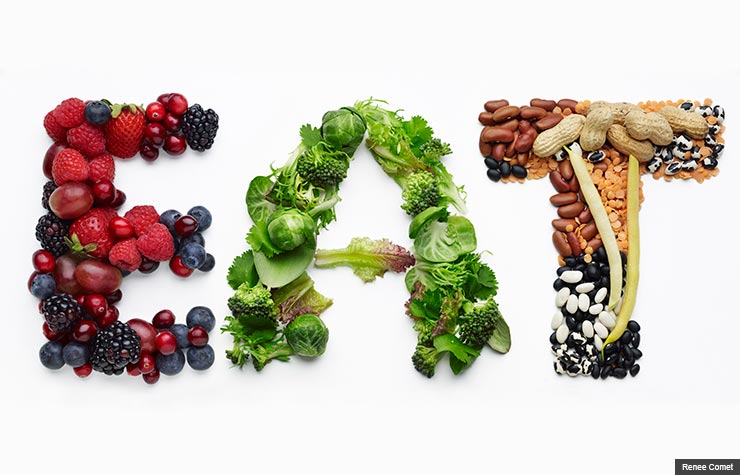 Eat the right foods to reduce your cancer risk.

"We know that we can prevent about a third of all cancers if people would maintain a healthy weight, eat a plant-based diet and be physically active," says Alice Bender, a registered dietitian with the American Institute for Cancer Research (AICR).

If you don't smoke, controlling your weight is the most important thing you can do to reduce your risk of cancer. More than 100,000 cases of cancer a year could be prevented in the United States if people maintained a healthy weight, the AICR estimates.

"Dozens and dozens of studies show that people who are overweight or obese have higher rates of many different cancers," says Walter Willett, M.D., head of the department of nutrition at the Harvard School of Public Health. "It's not just one study or two," he says. There is "a massive amount of evidence."

One groundbreaking study by the National Institutes of Health — following more than half a million AARP volunteers age 50 and older beginning in 1995 — has looked at how diet influences health, especially connections between diet and cancer. Albert Hollenbeck, senior research adviser for AARP, helped coordinate the study's volunteers. He says the long-running NIH-AARP study has given us the strongest evidence to date of links between diet and cancer in older Americans.

The NIH-AARP study has yielded dozens of important scientific papers. Looking at large groups of people for years, the researchers found associations between the foods the participants ate and their health. In August, for example, they reported that women who drank more than three cups of coffee a day were 35 percent less likely to be diagnosed with endometrial cancer. While the apparent link between coffee and this cancer is intriguing, until scientists understand how coffee works on this disease, they won't have absolute proof of its protection. But what we do have are strong indications that some foods can affect our cancer risk.

The bulk of evidence — from the NIH-AARP study and many others — links red meat to an increased cancer risk, especially colon cancer. And pork is not "the other white meat." It counts as red meat, along with lamb.

Sinha says that components of the meat itself seem to be related to cancer. The trigger may be the carcinogens formed when meat is pan-fried or cooked over an open flame — especially when it's charred.

The cancer risk also could be tied to the naturally high iron content of red meat. Moreover, high concentration of nitrites — added to processed meats as a preservative — may also explain why hot dogs, luncheon meats and bacon are linked to cancer.

To lower your risk, the AICR's Bender recommends no more than 18 ounces of cooked red meat a week — for example, a hamburger, a small steak and two pork chops. She suggests garbanzo and kidney beans, as well as dried peas such as lentils, for healthy, inexpensive sources of protein.

For cancer prevention, Bender recommends that you fill two-thirds of your plate with "plant-based" foods — vegetables, beans, whole grains and nuts — and no more than a third with animal-based foods such as chicken, seafood, lean beef or low-fat dairy products.

Briefly precooking meat (including beef, pork, fish or chicken) either in the microwave or by parboiling before grilling reduces cancer-causing compounds — it limits the time meat is exposed to high heat on the grill, says Bender. Don't worry about grilling vegetables — carcinogens are not formed when veggies are exposed to high heat.

Although cancer prevention groups recommend a diet rich in fruits and vegetables, some researchers contend we've oversold their protective qualities.

"This isn't to say that there's absolutely no benefit to fruits and vegetables for cancer risk, but if there is some benefit, it's pretty small and probably limited to specific cancers," says Willett, the Harvard nutrition expert. Bender says the large study Willett refers to examined whether all fruits and vegetables prevented all cancers and found only a small benefit. However, she says, each cancer has different causes and pathways. "Lumping everything together dilutes the message we have about vegetables and fruits."

Willett agrees that there's good evidence for the benefits of a few nutrients in fruits and veggies, such as lycopene — found in tomatoes, pink grapefruit, cabbage and beets. It seems to help protect against prostate cancer, he says. Cooked tomatoes, such as in tomato sauce, and small amounts of fat improve lycopene absorption and enhance the benefit.

The AICR also recommends crunchy "cruciferous" vegetables, such as broccoli and cabbage, which are packed with vitamins, minerals and antioxidants to protect against several cancers; fruits to protect against mouth, neck, lung and stomach cancers; and red-orange fruits and vegetables — cantaloupe, sweet potatoes — for protection against mouth cancers.

While researchers debate the overall benefits of fruits and veggies, there is mounting evidence that a diet rich in fiber from whole grains helps protect against cancer. Yikyung Park, a National Cancer Institute researcher working with the NIH-AARP study, reported on the benefits in a 2011 paper.

Lose weight, prevent disease and live longer! Filled with science-based diet recommendations, plus 7-, 14-, and 30-day meal plans with recipes, AARP New American Diet is available at the AARP Bookstore or at your favorite bookseller.

"Men and women who consumed the highest amount of dietary fiber were less likely to die from any cause," Park says. That research also found a link between fiber and a reduced risk of cancer death in men. And Park says fiber from whole grains was more protective than fiber from fruits and vegetables.

Foods, experts stress, are the best way to get most nutrients. Studies have found that high levels of vitamins in pill form can sometimes increase cancer risk rather than reduce it. For example, while beta-carotene — found in carrots and sweet potatoes — is thought to help protect against cancer, two studies unexpectedly linked high doses of beta-carotene supplements given to smokers to an increased risk of lung cancer. Another study found high doses of vitamin E supplements actually increased the risk of prostate cancer.

"Our bottom line message on supplements is that there's not enough evidence that they reduce cancer risk," says Colleen Doyle, director of nutrition and physical activity for the American Cancer Society.

The effects of coffee and alcohol

Coffee appears to lower the risk of endometrial cancer. And when researchers looked at the coffee habits of those in the NIH-AARP study, they found that men and women who drank four or more cups a day had a lower risk of colon cancer compared with non-coffee drinkers. Sinha, of the National Cancer Institute, theorizes that coffee — both regular and decaf — may help protect against colon cancer because it reduces "transit times." The less time food waste spends in the colon, the lower the risk of colon cancer. But the answer is likely more complex, she says: "There are about 1,000 compounds in coffee … We have only begun to skim the surface with these compounds."

When it comes to alcohol, "any level of alcohol increases risk for breast cancer," says Bender.

But high alcohol consumption also increases the risk of several other cancers for both women and men, including colon and liver cancers.

The American Cancer Society recommends that people who drink alcohol limit themselves to no more than two drinks a day for men, one drink a day for women.

Finally, remember to look at the big picture and consider your total diet. The easiest way to do this is to think colors. Your plate of food should have a rainbow of them — deep-coral baked salmon with a mix of dark green lettuces studded with ruby-red cranberries and a scoop of orange mashed sweet potatoes. The more colors, the more nutrients.

AARP has distilled the findings of the NIH-AARP study into a new diet book by John Whyte, M.D. AARP New American Diet is designed to help Americans age 50 and older lose weight and keep it off — with foods that also help reduce the risk of cancer, heart disease and diabetes.