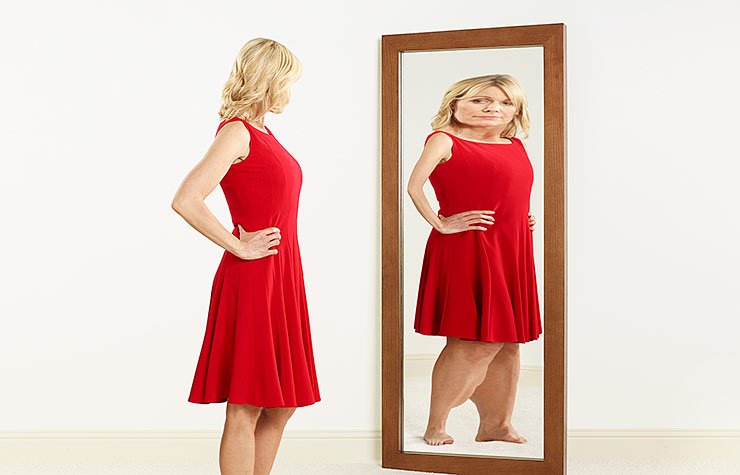 Although excessive concerns about weight can appear to be little more than vanity, an eating disorder is a mental illness.

Gayle Hodgins wasn't planning on buying candy, but then she saw the sale sign in the window of her local drugstore.

She stopped in and bought six large boxes of movie-theater candy and a king-size chocolate bar with one thought in mind. She planned to eat every last bite and then force herself to throw up.

Hodgins suffers from bulimia nervosa, an eating disorder that compels people to binge on large amounts of food and then purge the calories through vomiting, pills or excessive exercise.

Although most people think of eating disorders as a young person's problem, Hodgins is no teenager. She's a 53-year-old mother of two living in Philadelphia, and she's one of a disturbing number of middle-aged adults suffering from life-threatening eating disorders.

In June 2012 the prestigious International Journal of Eating Disorders published the results of a seminal study on the prevalence of eating disorders in midlife and beyond.

1. You make yourself vomit because you feel uncomfortably full.

2. You worry that you have lost control over how much you eat.

3. You've lost more than 14 pounds in a three-month period.

4. You believe yourself to be fat when others think you are too thin.

5. Thinking about food dominates your life.

Lead study author Cynthia Bulik, Ph.D., director of the Center of Excellence for Eating Disorders at the University of North Carolina, Chapel Hill, found that 13 percent of American women 50 or older experience symptoms of an eating disorder; 60 percent report that their concerns about weight and shape negatively affect their lives; and 70 percent are trying to lose weight.

Those figures mirror the rates found among teens and young women, says Bulik, author of Midlife Eating Disorders: Your Journey to Recovery.

"Eating disorders affect quality of life, and this has a tremendous impact on society," Bulik says. "It can affect productivity at work, well-being at home, and it can have very serious economic impacts" on families, as many insurance companies are reluctant to pay for care.

Although excessive concerns about weight can appear to be little more than vanity, an eating disorder is a mental illness with close links to depression and anxiety.

Patients who meet some, but not all, of the criteria for anorexia or bulimia or have other symptoms (such as forcing themselves to vomit after eating normal amounts of food, or chewing and spitting out large amounts of food) may be diagnosed with other specified feeding and eating disorder (OSFED).

A mental health condition with a physical impact

Apart from the psychiatric impact of eating disorders — sufferers often isolate themselves from friends and family — these conditions also have a serious medical impact.

Anorexia is the deadliest of all psychiatric disorders, killing up to 20 percent of chronic sufferers. Starvation, binge eating and purging all damage the heart and gastrointestinal systems. Erratic eating can cause hormone imbalances that can lead to osteoporosis. Repeated vomiting and malnutrition damage teeth, too. These problems affect eating disorder sufferers of any age, but they hit harder and faster as people get older and their bodies become less resilient.

Although no one knows exactly what causes an eating disorder, researchers believe it results from a complex interaction between our genes and our environment. Eating disorders most commonly begin during adolescence, amid the swirling hormones, physical changes and psychological adjustments of puberty.

While some patients recover in their teens and 20s, others continue to struggle into midlife and beyond. Some of those who do recover will relapse later in life. And still others will develop an eating disorder for the first time in midlife.

Menopause and other life changes

The physiological and psychological changes that happen during menopause seem to echo changes at puberty, Bulik says, which may make this time a high-risk period for the development of new eating disorders or the reemergence of old ones. These changes occur against the backdrop of America's youth-oriented culture, which embraces the idea that aging — and the extra pounds that can accompany it — must be fought at any cost.

"Women don't have a way of talking about the physical changes that go along with menopause," says Margo Maine, Ph.D., a clinical psychologist in West Hartford, Connecticut, and author of The Body Myth: Adult Women and the Pressure to be Perfect. "Instead they seek to manage their bodies with the next exercise craze or taking the latest diet pill."

These renewed concerns about weight and appearance frequently emerge alongside stressors unique to the 50-plus age group. Children leave home (or move back in), parents begin to age and boomers may begin to struggle with health issues.

Robin McKenzie, a 51-year-old resident of rural West Virginia, had suffered from an eating disorder since age 14, but it wasn't until the illness and death of her father last summer that her disorder significantly worsened. McKenzie's mother's health was failing as well, and her father's death had left the family saddled with massive amounts of debt. The burden of caregiving and financial management fell squarely on McKenzie's shoulders.

"I began to exercise to relax," she says. Plus, she began to eat less, and her weight plummeted to dangerous lows. Unable to concentrate at work, and with her heart, liver and kidneys beginning to fail, McKenzie was ultimately hospitalized last August. Despite being much older than the stereotypical eating disorder patient, she was far from the oldest patient on the ward. Several patients were in their 60s or older.

New ways to get well

Yet, maturity brings substantial advantages to fighting an eating disorder, experts say. Older patients have more life experiences and insights to draw on. In addition, they're more painfully aware of the physical and psychological costs of maintaining their unhealthy eating patterns. Even those who have tried and failed to control disordered eating in the past can often succeed later in life.

"Lots of times older women feel such shame and hopelessness because they've had the eating disorder for so long, but I've seen great things happen in people who have sought help in their 40s, 50s, 60s and beyond," Maine says.

A growing awareness of eating disorders in older women (and some men) has also led to more treatment options. Women whose illnesses are more severe or chronic may require hospitalization, or treatment at a live-in facility. There, all meals are provided, and women participate in a variety of therapies, including cognitive behavioral therapy, nutritional counseling and medication.

After a few small setbacks this past winter, McKenzie is maintaining her weight and working toward a new career. Hodgins remains in therapy and is making progress. "Slow and steady wins the race, right?" she says. "I just want to be well. I want to be a normal person."

Carrie Arnold is a freelance writer