En español l Hot flashes, night sweats, moodiness, forgetfulness — these are menopausal symptoms that women have no problem discussing with their doctors.

But when it comes to the dry, tender vaginal tissues and painful intercourse caused by menopause, women suddenly become much less talkative, studies show. 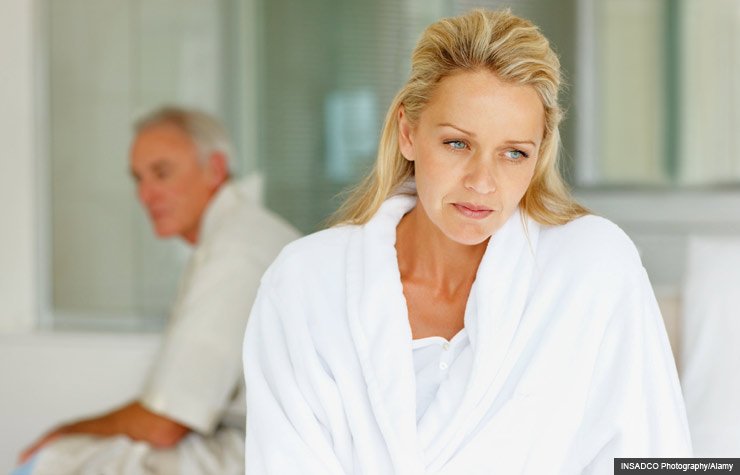 Suffering from vaginal dryness? Over-the-counter products may alleviate your symptoms.

That may be changing. The Food and Drug Administration recently approved Osphena, an estrogen-like drug some are calling the "pink Viagra" because it strengthens vaginal tissues, making intercourse less painful.

With the drug heading to market this month and drugmaker Shionogi planning a big marketing campaign, the problem of painful sex is suddenly getting a lot more attention.

And it's about time, says Sheryl Kingsberg, chief of the division of behavioral medicine at University Hospitals Case Medical Center in Cleveland.

In a study of more than 3,000 women ages 45 to 75, Kingsberg and her colleagues found that many women suffer silently with vaginal pain, mostly because of embarrassment about bringing it up. (In the interest of full disclosure, Kingsberg reports that she and her colleagues received financial support from Osphena's drugmaker, Shionogi, even though the drug wasn't part of the study.)

The condition the women have is officially known as vulvovaginal atrophy (VVA), which refers to the thinning and weakening of vaginal tissues due to the drop in estrogen after menopause.

A number of studies estimate that close to 50 percent of postmenopausal women will experience VVA-related symptoms, including vaginal dryness, irritation, pain during intercourse and trouble with urination. In some cases, inflamed tissues can become infected.

With all this discomfort and pain, you'd think women would be avidly seeking relief. But research in both the United States and Europe notes that women frequently don't report their symptoms and, as a consequence, go untreated.

In Kingsberg's study, published in May in the Journal of Sexual Medicine, she and her colleagues found that nearly 60 percent of the women said vaginal dryness and irritation had affected their enjoyment of sex, yet only 44 percent had discussed the problem with their health care provider.

Almost half of the women "expected their health care provider to bring up the topic" because they were too shy to bring it up first, Kingsberg told AARP.

But the providers were even worse at talking about it. A measly 13 percent of women in the study said their doctor or nurse had initiated a conversation about postmenopausal vaginal changes.

Part of the reason for women's reticence may be that they don't realize that their symptoms "are common and directly tied to menopause," Kingsberg said. Only 24 percent of the participants attributed their discomfort to menopause's hormonal changes.

Women also don't know enough about the different over-the-counter products or the prescription low-estrogen aids that might relieve their symptoms and keep VVA from getting worse, researchers found.

In the study, only 11 percent of women used low-dose prescription estrogen therapies. These include creams, pills and a vaginal ring that administer a small amount of estrogen directly to the affected tissues. Margery Gass, M.D., executive director of the North American Menopause Society, calls these low-dose therapies "very effective and safe" for dryness and discomfort that hasn't responded to over-the-counter lubricants.

For example, a study published in 2011 of ultra-low-dose Vagifem tablets, approved by the FDA in 2009, found that the pills, which are inserted into the vagina, provided sufficient estrogen to relieve symptoms and repair the tissue changes associated with menopause.

Inserting the pills vaginally limited absorption of the hormone by the rest of the body, although the products haven't been tested for safety on women who had estrogen-positive breast cancer, the study noted.

A variety of products can help with vaginal dryness.

Osphena (ospemifene) isn't estrogen, it just acts like it on vaginal tissues. However, the new drug comes with a black-box warning that it can increase the risk for endometrial cancer. As with estrogen therapy, the drug also increases the risk for stroke and deep-vein thrombosis, the FDA said. Women are worried about using hormonal therapies, even localized ones, which is yet another reason women need to talk about their options with their health care provider, says Kingsberg.

Women also may not realize that using certain common products inside the vagina not only won't help their symptoms but could sharply raise the risk of infections.

That much was borne out by a University of California, Los Angeles study published in April, looking at what vaginal products women used and why. The researchers found that women age 50 and older were more likely than women overall to use a petroleum jelly, such as Vaseline, or baby oil inside the vagina — despite warnings on the products not to use them internally — thus increasing their risk of developing bacterial or yeast infections.

Lead author Joelle Brown, an assistant professor with the Department of Epidemiology in UCLA's School of Public Health, said lab tests showed that the women who used petroleum jelly and baby oil were twice as likely to have vaginal infections compared with those who didn't. Using the wrong products can damage vaginal and rectal tissues and allow bacteria to enter, she warned.

As with the Kingsberg study, Brown and her colleagues found that vaginal dryness was a common complaint among older women and the reason they were seeking effective lubrication.

About 75 percent of women age 50 and older in the UCLA study said they had used a commercial vaginal lubricant in the past month. More than half of the participants in Kingsberg's study said they suffered from vaginal dryness.

Although Brown cautions that she's not a doctor and can't provide health care advice to women, she says her research still comes to a familiar conclusion about ensuring vaginal health: "Women need to talk with their health care providers."

Candy Sagon is a senior associate editor for health.