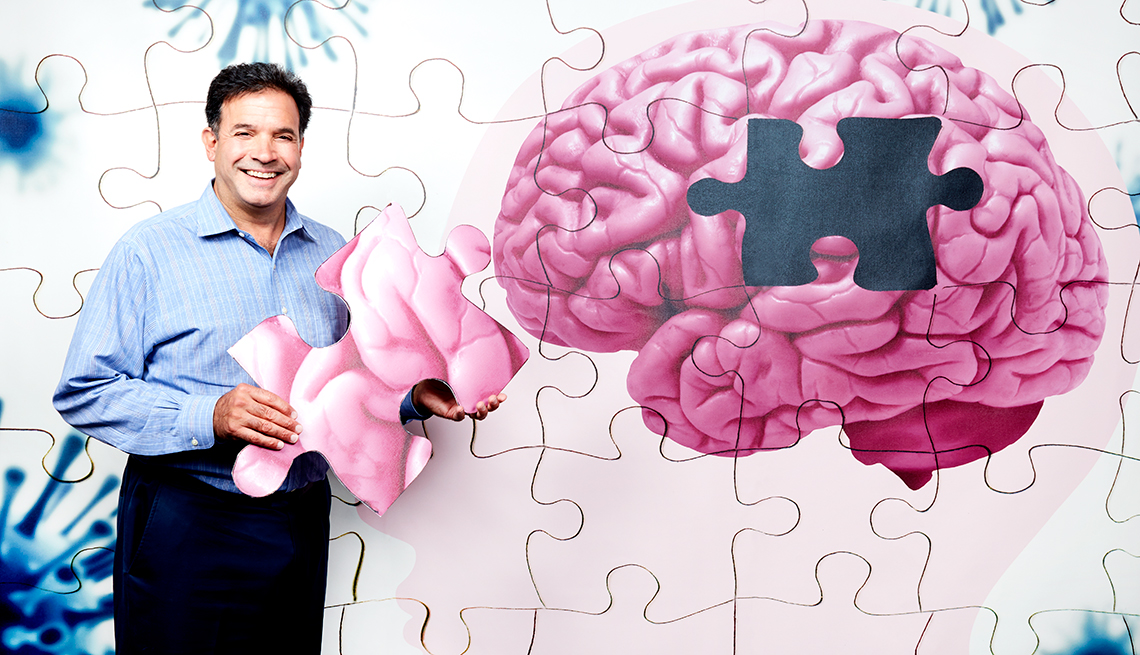 En español | How did you first get involved with Alzheimer's research?

Back in the '80s, I decided I wanted to be the first person to build a genetic map of a chromosome from end to end. I picked chromosome 21 because it was the smallest chromosome, and that led me to Down syndrome. Since people with Down syndrome have an extra copy of chromosome 21 in every cell, just about all will inevitably develop the plaques and tangles in the brain that are associated with Alzheimer's. So I speculated that there must be a gene in chromosome 21 that caused the buildup of plaque in the brains of Alzheimer's patients. I was young and stubborn, and, sure enough, I found the gene, and it remains the number-one target for Alzheimer's drug research today.

So what happened next?

We've found many different genes since then, but every time we put them in mice, they produced amyloid [the plaque associated with Alzheimer's] but not the other chief characteristic of the disease: the neurofibrillary tangles that kill brain cells. For decades, there was a disconnect about why the mice didn't get the rest of the disease. Then, two years ago, we discovered how to create a model of Alzheimer's in a petri dish, using mini-brains made of human nerve cells. That provided us with proof that, one, amyloid does cause the tangles and, two, that humans are not 150-pound mice.

What role does inflammation play?

How close are we to finding a cure for Alzheimer's?

I think we're going to soon have drugs that lower amyloid. But the challenge is going to be convincing the FDA that people need to start taking these drugs now. If I could hypnotize the FDA and make them do what I wanted, I'd say, "Get over it. We can't wait 10 years for prevention trials. People are getting this disease at epidemic levels. Once we have drugs to bring amyloid down, let's get people to take them."

How has what you've learned affected your own lifestyle?

For a long time I was a workaholic. I used to get four or five hours of sleep. But now I get seven to eight hours religiously every night. Why? To cycle into the deepest stage of sleep after REM several times every night, because it's then and only then that you stop making amyloid and clear out the plaque and other debris from the brain.

Your grandmother had Alzheimer's. How did that affect you?

Having Alzheimer's hit you personally incentivizes you to work harder on it, but if you work on a project with too much emotion, it can blind you. You have to stay cold, sober and objective.

In my lectures, I talk about the 3-D brain, using the drive of the brain stem, the devotion that comes from the limbic system and the dream from the frontal lobe. The greatest minds of our time had the perfect blend of all three. Having a grandmother with Alzheimer's gave me the drive and devotion, but the dream [required] integrating my intellect and intuition.

Hugh Delehanty is a freelance journalist and former editor in chief with AARP Publications.