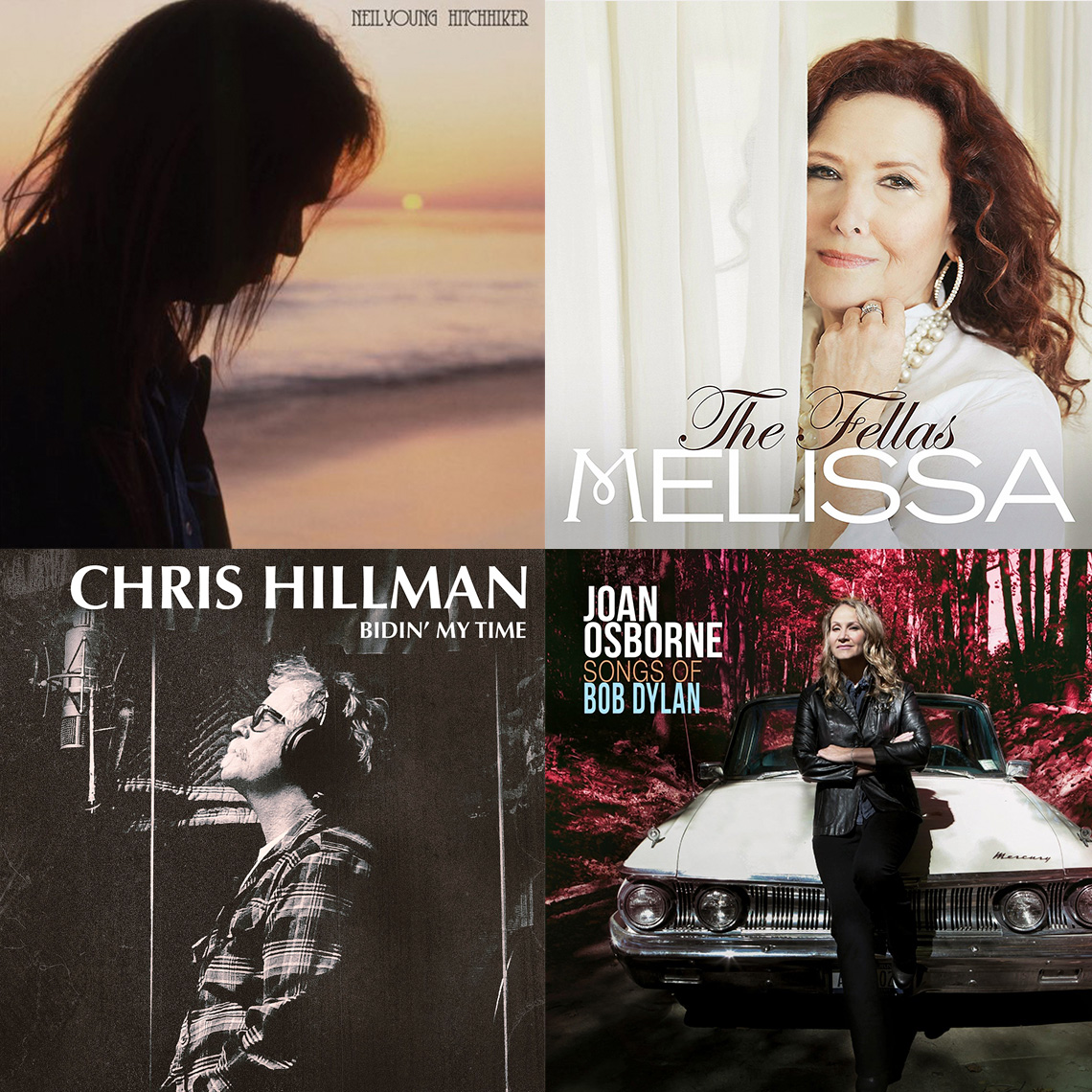 As summer’s busy tour circuit unplugs, the music industry shifts focus to a bumper crop of fall releases. It’s a perennial cycle: Pack venues with live acts during vacation months, then flood the market with new records after Labor Day in hopes of heating up sales as Black Friday and year-end holidays approach. (Artists also time their output to meet the Sept. 30 deadline for Grammy Awards eligibility.)

Autumn’s music bounty gives the touring business a second wind, as musicians from Van Morrison and Steve Miller to Shawn Colvin and Joan Osborne hit the road to amplify their latest works. The coming inventory, boasting a hefty selection aimed at the 50+ audience, offers the usual spate of originals and an unusually high volume of remakes.

On The Fellas, an album that honors iconic crooners, Melissa Manchester interprets tunes popularized by Dean Martin ("Ain’t That a Kick in the Head"), Mel Tormé ("Love Is Just Around the Corner") and Gene Kelly ("For Me and My Gal"). The founding member of Bette Midler’s Harlettes is best known for ’70s hits such as "Midnight Blue" and "Don’t Cry Out Loud," but she feels strongly connected to an earlier era.

“In 1989, I paid homage to several great female singers [Ella Fitzgerald, Judy Garland, Sarah Vaughan] on my album Tribute,” says Manchester, 66. “I always wanted to complete the idea by acknowledging the great male singers. On The Fellas, songs sung by giants like Frank Sinatra, Tony Bennett, Nat King Cole, Johnny Mathis and more formed the music of my childhood and set in stone a platinum standard.”

Manchester recorded her 21st studio album, released Sept. 8, with the 40-piece Blue Note Orchestra, composed of students, alumni and faculty from California's Citrus College. With their help, “my dream came true,” she says. “I am thrilled to share this incredible legacy with student musicians and audiences alike.”

Chris Hillman, a founding member of the Byrds, Flying Burrito Brothers, Manassas and the Desert Rose Band, dips into his rich and varied past on Bidin’ My Time, out Sept. 22. His first studio album in more than a decade finds the country rock pioneer retooling such Byrds gems as "The Bells of Rhymney," featuring Hillman harmonizing with David Crosby and Herb Pedersen; "Here She Comes Again," previously available only on a live Australian release; "She Don’t Care About Time," the obscure B side to "Turn! Turn! Turn!" that was written by the Byrds late cofounder Gene Clark; and "Old John Robertson." In addition to a handful of originals, Hillman revamps "Walk Right Back" by the Everly Brothers and "Wildflowers" by Tom Petty, who produced the album.

“I feel my best musical moments have come in my later years, as if all that I absorbed working with so many talented people over the last five decades has come to a wonderful place of fulfillment,” says Hillman, 72. “But that’s not the end to the story. I strive to continue exercising my creative energy in the moment — not for yesterday, not for tomorrow. I agree with the sentiment: Our best efforts lie just around the corner.” He’ll be touring Sept. 21 through Jan. 27.

Here’s a rundown of more albums (either just released or on the way) and tours this fall.

Joan Osborne: Songs of Bob Dylan. Osborne’s 13-track salute to Dylan, which ranges from ’60s classics (such as "Masters of War" and "Highway 61 Revisited") to tunes from latter-day albums (such as "Time Out of Mind" and "Love and Theft") grew out of two residencies at New York’s Cafe Carlyle. She’s on tour through Nov. 3. 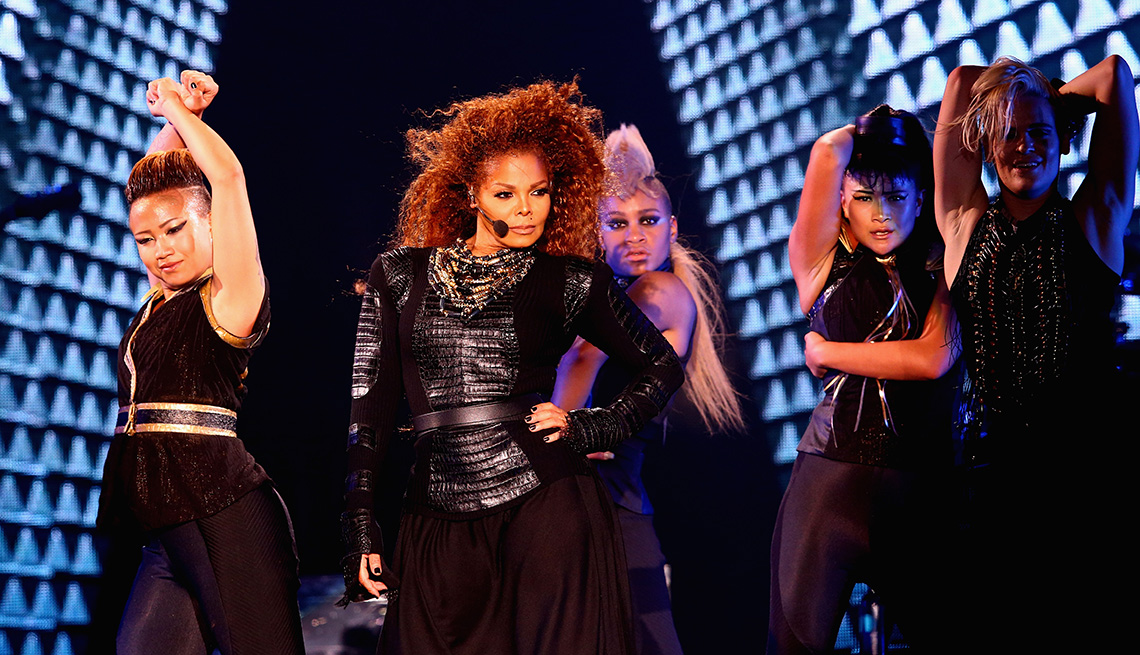 Janet Jackson: "State of the World" tour. The 56-date run, from Sept. 7 to Dec. 17, was booked to make up for dates canceled when pregnancy forced the pop star to suspend her "Unbreakable" tour last year.

Gregg Allman: Southern Blood. The poignant send-off by the Allman Brothers singer, who died at 69 in May, has a single original tune, the heart-tugging "My Only True Friend," as well as nine covers by peers and heroes, from Dylan to Tim Buckley. The set was produced by Don Was and recorded at the famed FAME Studios in Muscle Shoals, Ala., where his late brother, Duane Allman, worked as a session guitarist in the ’60s.

Neil Young: Hitchhiker. The Canadian rocker’s 38th studio album resurrects 10 songs recorded on acoustic guitar in 1976 at Indigo Ranch Studios in Malibu, Calif. "Hawaii" and "Give Me Strength" have never been released, while others, like "Powderfinger" and "Pocahontas," cropped up in earlier records. 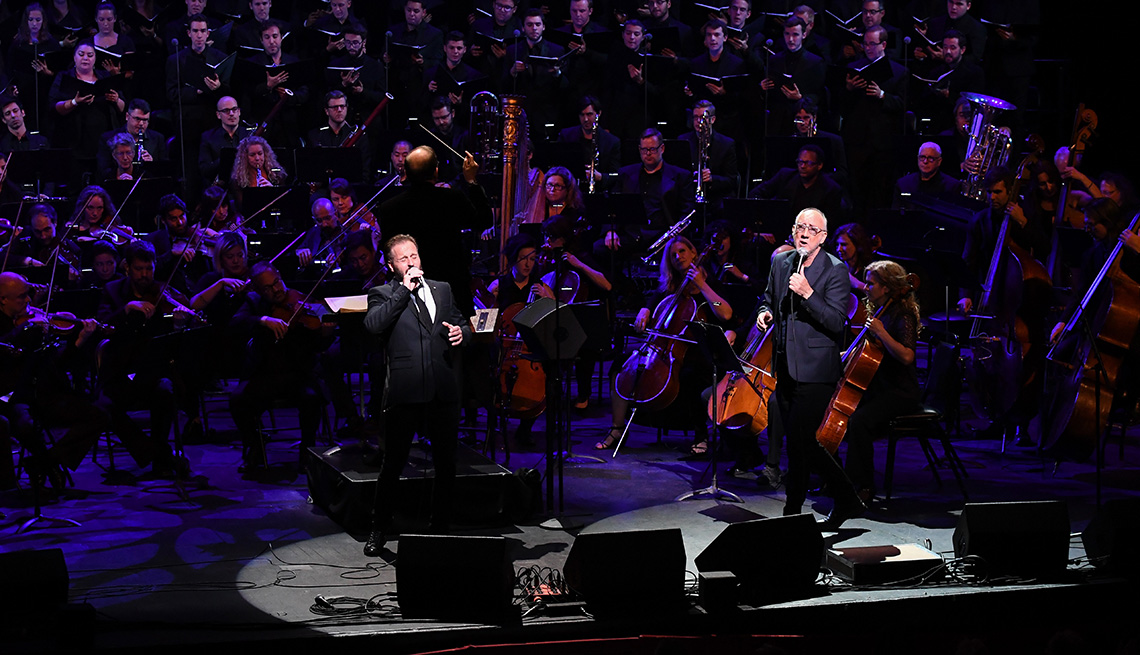 The Vietnam War soundtrack (Sept. 15). The 10-part PBS series directed by Ken Burns and Lynn Novick has two audio companions. Trent Reznor and Atticus Ross composed more than 90 minutes of music for the two-CD or three-LP score. The two-CD soundtrack serves up 38 songs drawn from 120 used in the series, all from the rock era’s richest vein, featuring such acts as Dylan, the Beatles, the Rolling Stones, the Byrds, Otis Redding, the Animals, Santana, Marvin Gaye, Janis Joplin and Jimi Hendrix. 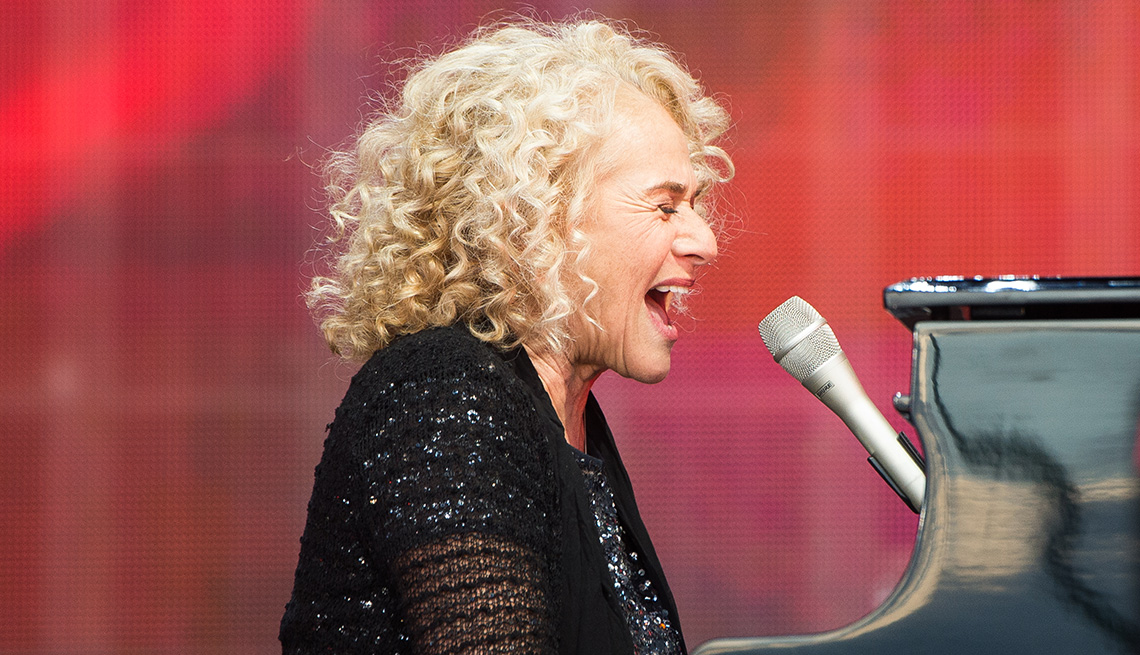 Carole King performs her album “Tapestry" as part of the 2016 British Summer Time music festival at Hyde Park in London.

Carole King: Tapestry: Live in Hyde Park (Sept. 15). The singer-songwriter performed her landmark 1971 album in its entirety for the first time before 65,000 fans in 2016. The show, which included other King classics, resurfaces on CD/DVD, CD/Blu-ray or digital formats, and coincides with PBS airings of the concert in September. 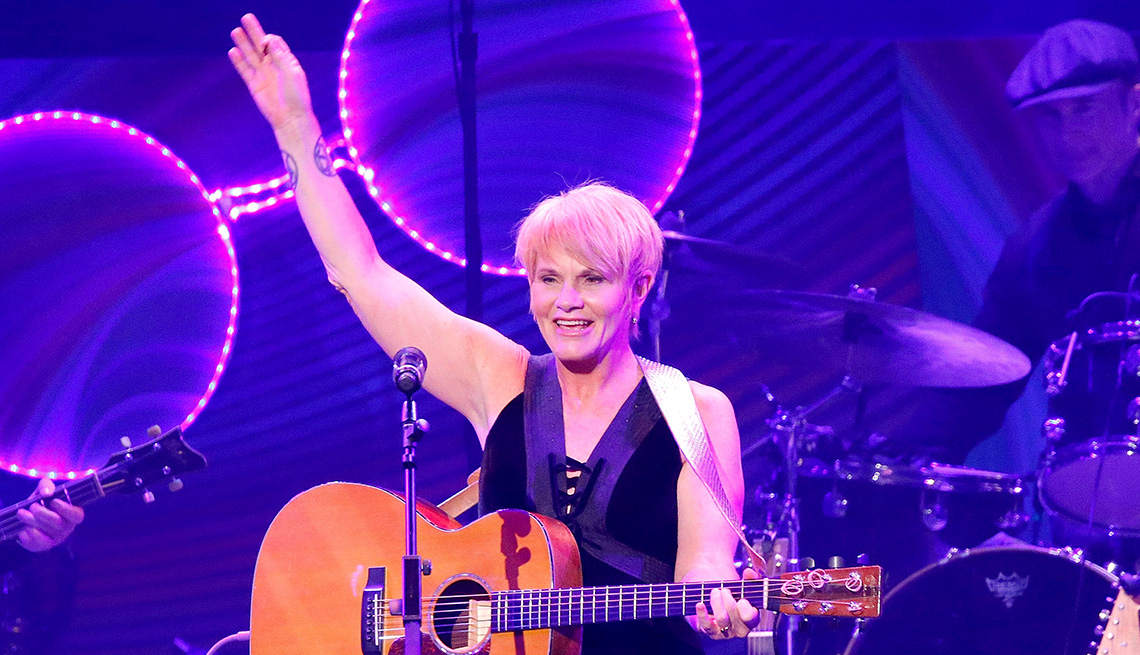 Shawn Colvin performs at the 2017 Kennedy Center spring gala, Come Together: A Celebration of John Lennon, in Washington.

Shawn Colvin: A Few Small Repairs (Sept. 15). The 20th-anniversary edition of Colvin’s 1997 breakthrough album includes the Grammy-winning "Sunny Came Home," the hits "You and the Mona Lisa" and "Nothin’ on Me," plus seven bonus tracks. It will be available on vinyl for the first time. She’ll perform the entire album, as well as other favorites and surprises, on her first major tour since the original album’s release, from Sept. 30 to Nov. 19.

Steve Miller Band: Ultimate Hits (Sept. 15). Rock’s gangster of love reissues two versions of his career-spanning hits: a 22-track single CD and digital set that includes three rarities and a 40-track double CD and digital deluxe edition with loads of bonuses. Both offer such chart-toppers as "Fly Like an Eagle," "Jet Airliner" and "The Joker," and previously unreleased live cuts of "Living in the USA" and "Space Cowboy." Vinyl versions arrive Oct. 27.

Steven Van Zandt: "Little Steven and the Disciples of Soul 2017" tour. On break from his E Street Band duties with Bruce Springsteen, Van Zandt heads out with his own posse starting Sept. 21 at the Laid Back Festival in Holmdel, N.J. They’ll spotlight tunes from the current album, Soulfire, on U.S. dates through Oct. 26. 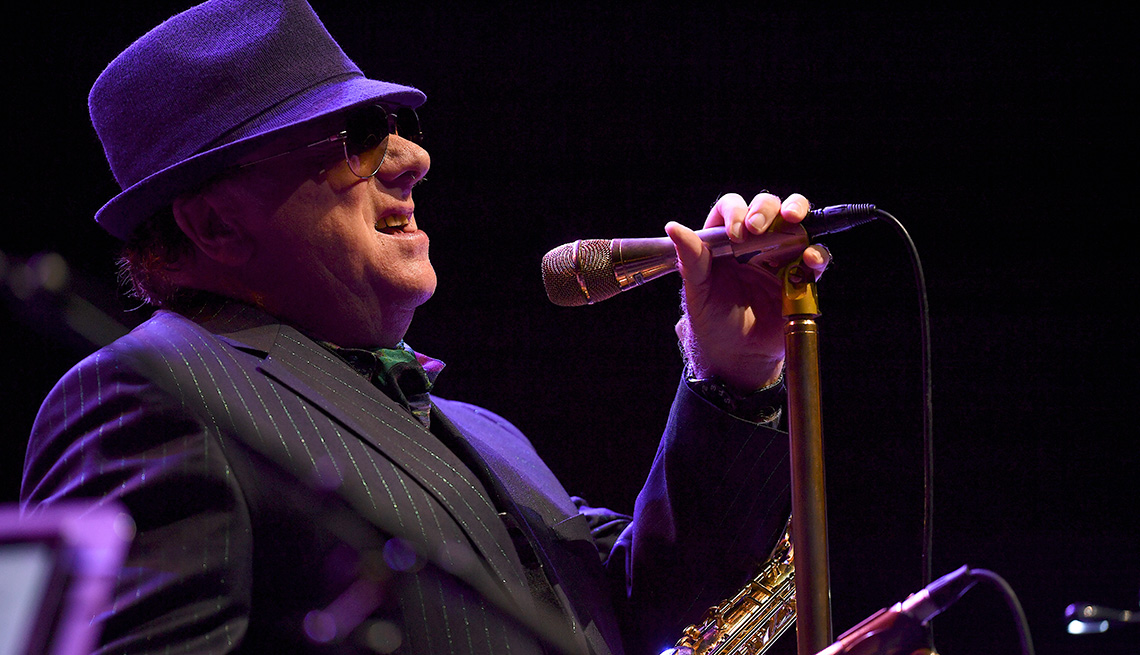 Van Morrison: Roll With the Punches (Sept. 22). The Irish singer’s 15-track album features five originals and vintage R&B favorites such as Sam Cooke’s "Bring It on Home" and Lightnin’ Hopkins "Automobile Blues." He started a U.S. tour Sept. 10 with an appearance at the Outlaw Music Festival in Hershey, Pa. 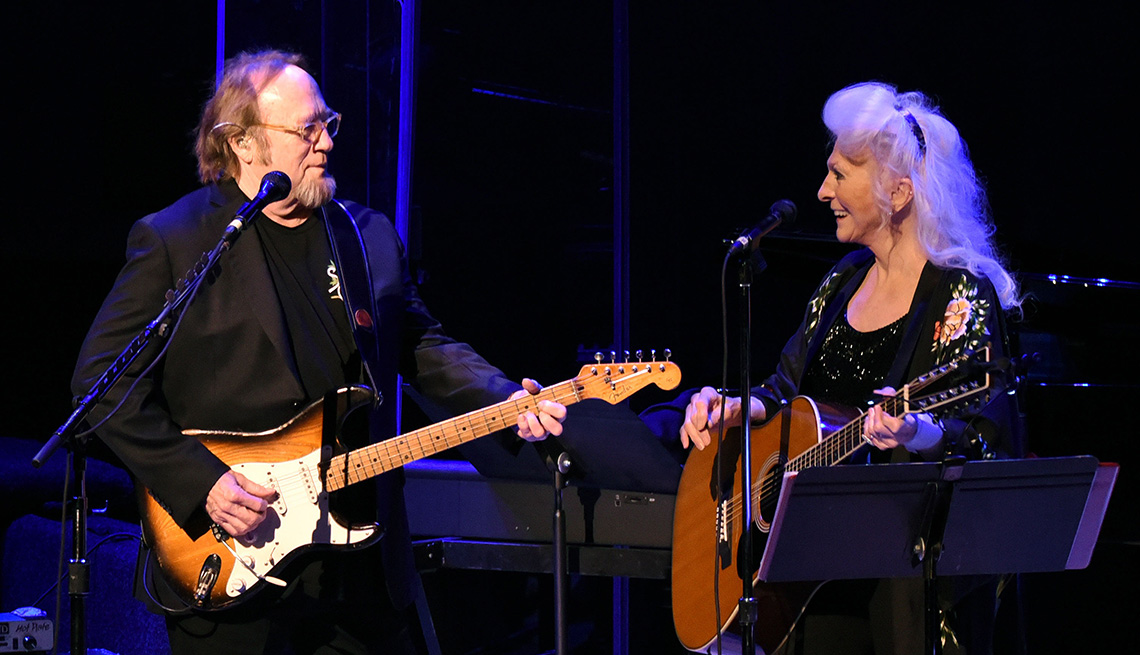 Stephen Stills and Judy Collins: Everybody Knows (Sept. 22). The pair’s first album together commemorates 50 years of friendship. They dated in 1967, which inspired Stills to write "Suite: Judy Blue Eyes," but they never recorded together. On this debut, they duet on Collins’ new "River of Gold," dig up songs from past works, and perform covers of Dylan’s "Girl From the North Country," Leonard Cohen’s "Everybody Knows" and the Traveling Wilburys’ "Handle With Care." A tour that began July 27 runs through Nov. 4.

Roadcase Royale: First Things First (Sept. 22). Heart’s Nancy Wilson and R&B singer Liv Warfield of Prince’s New Power Generation join forces on a soul-spiked rock debut that includes a revival of Heart's No. 1 smash "These Dreams." The band has booked a handful of headline dates and opens for Bob Seger’s tour that runs Sept. 12 to Oct. 28.

Shania Twain: Now (Sept. 29). After a 15-year hiatus, the 52-year-old country superstar, whose Come on Over from 1997 is the best-selling country album in history, returns with a deeper voice and a deeply emotional song cycle that deals with her recovery from a broken marriage. She’s on tour till November.

Robert Plant: Carry Fire (Oct. 13). On his 11th studio album, the British singer and former Led Zeppelin wailer rejoins his backing band the Sensational Space Shifters and duets with Chrissie Hynde on "Bluebirds Over the Mountain."