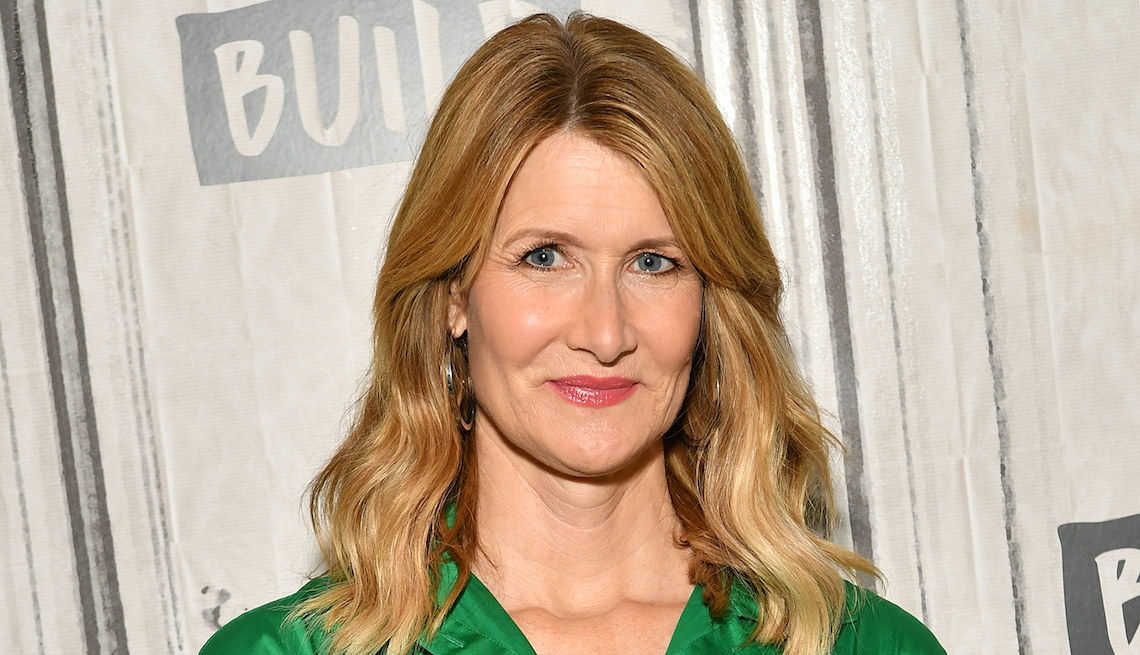 Like almost every film made by Laura Dern, 52, Trial by Fire (opening May 17) is truly a movie for grownups: a fact-based drama about writer Elizabeth Gilbert (Dern), who fought to get Cameron Todd Willingham (Jack O'Connell) freed from Death Row. Willingham was convicted of arson in what one expert called “the ultimate triumph of junk science.” Accusers included a goose-hunting pal of the judge — a marriage counselor without crime expertise who never met Willingham but testified that his Led Zeppelin poster indicated satanic motives — and a jailhouse source who said he was promised leniency for claiming that Willingham, whom he didn't know, confessed to him (a claim he recanted). Is there room for such a thoughtful, mature film in an era dominated by superhero flicks and kid-friendly cartoons? “There had better be, or I'm out of work, man,” Dern cracked to AARP. Her unemployment is not likely: She easily toggles between big-screen blockbusters (Jurassic Park, Star Wars: The Last Jedi) and high-profile TV roles like Renata Klein, “the Medusa of Monterey,” in HBO's quintuple Emmy-winning melodrama hit Big Little Lies, whose second season begins June 9. She told us the truth about it all.

Watch: Clip from 'Trial by Fire' - Finish Your Job For You

Why did you want to be a part of Trial by Fire?

I'm an admirer of [Oscar-winning Glory director] Edward Zwick. He sent me David Grann's New Yorker article, also titled “Trial by Fire,” and it was so devastating to learn about Todd's case. I was also moved by Elizabeth Gilbert's small act of kindness, and how her simple gesture of compassion had a ripple effect in the most profound way and impacted change. It was really powerful to be inside that story.

You spent a lot of time with Gilbert. What did you take away from that?

It would be easy to think of her in a very saintly way, and she's raw and regular and a single mom and a playwright. She seeks truth in everything, and she's complicated. What she let me inside of was her humanness, versus this extraordinary thing she did. It's hard to play an amazing person. I really wanted her to feel relatable.

What was Edward Zwick's style like on the set?

One of the things I really appreciated about him was he didn't want this to be an art film. He didn't want to show the audience what a badass storyteller he is and how great his shots are. He wanted an accessible movie, so that people who might otherwise have believed in capital punishment could be touched by this story to reconsider our justice system. I find that selfless and supercool.

Do you ever worry that your political outspokenness might alienate audiences?

I never worry about it having a negative impact because I feel that it's my requirement as a citizen and especially as a mother [to son Ellery, 17, and daughter Jaya, 14] to speak out whenever witnessing any injustice. I consider myself more a humanist than someone who's political. It's about social justice, so I care deeply about stories like Big Little Lies and [last year's HBO movie] The Tale that address domestic violence and sexual abuse.

Watch: Clip from 'Trial by Fire' - Life Is Fair

When you did Season 1 of Big Little Lies, did you think there might be a second?

I thought it would be limited, and I'm so grateful that we got to do it again because I'm madly in love with Renata Klein. She's just the most fantastic person, as she well knows. She's an amazing character to play and find out more about, and we felt — just like the audiences who connected to it — that there was much more fun to be had.

Meryl Streep, 69, joins the cast this season. What was the most surprising thing you learned from working with her?

I knew she would be extraordinary and that it would be the greatest gift of my life as an actor. The real surprise was her depth of generosity to make it the best it deserved to be. I would get a phone call from her saying, “Hey, I just read the third episode. Why do you think Renata does that thing?” Talk about a dream collaborator! She was looking out for every story line. She didn't need to be such an invested participant. That blew my mind.

Growing up with Bruce Dern, 82, and Diane Ladd, 83, as your parents, did you ever consider anything other than acting as a profession?

I considered what I am turning my life into now, which is motherhood, producing, writing, directing, activism and environmentalism. Let's do it all, dude!

Your parents have never retired. Do you think you will?

I will never retire, but I hope I can retire from the need to work. I hope I have the great privilege that everyone deserves — and very few Americans are blessed enough to have —to work not for their livelihood but because they love it, and it brings them joy. I pray that for everyone. That's why we need to keep fighting for justice and for people to represent us who actually care about human dignity.