En español | A Barbie doll dress—ivory with blue polka dots—sits atop Carmen Marc Valvo's desk. Encased in glass, the tiny outfit, sewn when the designer was just eight, is a reminder of how long fashion has been a part of his life. Forty-seven years later, he dresses celebrities such as Eva Longoria Parker, Oprah Winfrey, and Catherine Zeta-Jones in stunning yet simple eveningwear. New York's Fashion Week showcases his collections.

And just as styles change, Valvo's views on life are evolving. "I'm trying to make discussing cancer fashionable," says the designer, who's become a dedicated cancer awareness advocate since being diagnosed with colorectal cancer in 2003. "Though fashion is my passion, this crusade has given my life a whole new direction.

"The passion and crusade come together in his bustling showroom in New York's Garment District. It's hard to imagine that five years ago, Valvo, of Spanish and Italian descent, was searching for solace and inspiration—not thinking about cancer-awareness campaigns—after the numbing diagnosis and subsequent emergency surgery.

Now, between model fittings and surrounded by reams of fabric and couture garments, Valvo points to a mesh jersey. The shirt will be worn by participants in Rock & Run on the River, Memorial Sloan-Kettering Cancer Center's event to support cancer survivorship. He also serves as ambassador of the National Colorectal Cancer Research Alliance.

"Carmen is one of the most generous ambassadors for this cause and a testament to the fact that early detection saves lives," says CBS Evening News anchor Katie Couric, who cofounded the alliance with the Entertainment Industry Foundation. And he's aided Gilda's Club—a group named for the actress and comedian Gilda Radner, who died of ovarian cancer in 1989—among other organizations.

Of lending his support to all cancer causes, Valvo says, "It's important to raise the money, but more important to raise awareness." And that's exactly what the nature-loving Valvo is doing as he prepares to celebrate his 20th year at the helm of his company and the rollout of a new swimsuit, lingerie, and eyewear line to accompany his eveningwear.

"Having known Carmen for over 20 years, I've appreciated his tremendous talent as a designer of gorgeous red-carpet looks, but I've also seen what a thoughtful activist he's become by embracing cancer awareness after his own illness," says Ugly Betty actress Vanessa Williams, who appeared with Valvo in a public service ad on colorectal cancer.

More Than Needle and Thread 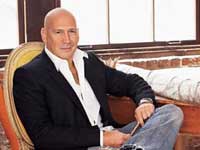 Although Valvo had always shown artistic inclinations, his anesthesiologist father and nurse mother had groomed him for a medical career, specifically as a plastic surgeon. "We were all supposed to be doctors," says Valvo of himself and his five siblings. None pursued that path. "I was squeamish, so I used a needle and thread in a different manner: to make women look beautiful."
Ironically, it was in the face of a medical crisis that he chose his career; he decided to become a designer in 1975 while bedridden in the hospital after a car accident.

He then enrolled at the Parsons School for Design in New York City, where he met his long-time domestic and business partner, Christian Knaust. The former menswear designer recalls what first struck him about Valvo: among other things, it was "his perseverance to get what he wants. Nothing can stop him."

After working with Nina Ricci and Christian Dior and freelancing throughout Europe, Valvo found his niche creating eveningwear. "Clothes should be feminine and sexy and classic. I use fashion as part of an expression of who I am," he says, then reveals a little more. "I love lace. I attribute that to my genetics, my Latin side."

Something else was lurking in his genes, but he didn't find out until 2003, when he began feeling not quite right. After a few months of chalking it up to stress, he went to the doctor. Despite getting a clean bill of health, he insisted on a second opinion.

A colonoscopy—performed prior to the recommended age of 50—showed advanced cancer. Within days, he underwent surgery to remove part of the colon. "You need to listen to yourself. If I hadn't listened to myself, I probably wouldn't be here," he says. If you're uncomfortable with your doctor or think they aren't listening, seek another opinion, urges Valvo. "Be your own advocate."

That point is especially important for Hispanics: only 37 percent underwent a colorectal screening within the recommended time frame—every 10 years for healthy adults over 50—compared with 57 percent of white non-Hispanics, according to a 2008 study in the Archives of Internal Medicine. In addition, colorectal cancer is the second leading cause of cancer deaths among Hispanic men and the third leading cause among Latinas.

Dr. Elmer Huerta, president of the American Cancer Society, can't stress enough the importance of early screening. "Few people in this country are talking about colorectal cancer—Latinos included," he says. "Cancer has long been a taboo issue in Hispanic countries, where talking about cancer is like talking about a death sentence."

Valvo didn't tell family, friends, and coworkers about the diagnosis and surgery. "When I took this journey, I went through it alone and wanted to keep it to myself," he recalls. It wasn't until he told his sister that he learned of two familial cases of colon cancer. Because his family is genetically predisposed to the disease, he insisted they all be screened. And though he didn't share his illness with family early on, he now finds it "mind-boggling that you can have something so important that's not discussed," he says.

A Garden of Delights

As he'd kept the details of his medical journey to himself, he also faced recovery alone. "Part of the healing process wasn't only physical, but also mental," Valvo says, "because you play with life and death like a roller coaster ride, but you don't know what the outcome will be."

For solace, he turned to his garden at his house in the Hamptons, New York. "When I have a problem, I like to weed," he says, "weed the problem out of my life." And he discovered that as gardens have texture and rhythm, so does fashion: Valvo's spring 2004 collection, The Garden, was born. Pink and white petals, tiny crystals atop them, became the collection's hallmark.

What could the next 20 years bring Valvo? "I see him still gardening, continuing his work in fundraising and cancer awareness, and active in the fashion industry," says Knaust. "I hope we have a long, healthy, and happy life together."