I’m not sure what the best book of 2010 was, but Jonathan Franzen’s Freedom was easily the most hyped. His sprawling novel of yuppie angst had been hotly anticipated for nine years — ever since Franzen’s previous work, The Corrections, came out to controversy and acclaim in 2001. Weeks before readers could find Freedom in any bookstore, for example, Time magazine had anointed the author a “Great American Novelist.” 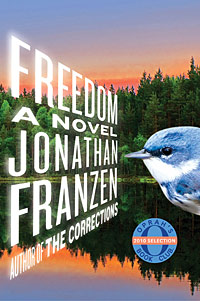 • Life as a Footnote. Read

Turns out Time was right. Freedom is, for the most part, a powerful novel. My main complaint is not that Franzen thinks too much, but that he insists on vivisecting his thought process before his readers’ eyes. Take the book’s central concept of freedom: You can practically see the author thinking about it at the outset, where the four members of the upwardly mobile Berglund family — Walter, the do-gooder paterfamilias; Patty, the cheerful yet seething matriarch; and their children, Joey and Jessica — rub their St. Paul neighbors the wrong way, and you can see him thinking about it at the book’s end, which features a stereotype-bending May-September romance.

Franzen likewise has freedom on his mind, believe it or not, when he writes a scene in which Joey Berglund picks through his own feces to find an engagement ring he swallowed a few days earlier, and the author contemplates it again as he considers the freewheeling but ultimately sterile lifestyle of Walter’s friend from college, Richard Katz, who unsettles the Berglunds’ relationship from its start.

Freedom’s plot, briefly, is this: Patty and Walter Berglund meet in college, then set up house in St. Paul until Walter’s jump from social activism to political lobbying takes the couple to Washington, D.C. The family is beset with marital, parental, and sibling misunderstandings along the way, leading the Berglund kids to pursue their own futures with very little thought to family ties. Meanwhile, Walter’s new career allows Franzen to give voice to a major theme about extinction and vanishing bird species — and about what actions corporations are and are not free to take in the world we all inhabit.

The book’s conventional narrative gets disrupted early on by an “autobiography” of her early life that Patty Berglund writes in the third person, at the urging of her therapist. I truly enjoyed this section, but it left me perplexed: Patty’s tone is so angry, and so out of synch with that of the other protagonists, that the reader can never really approach her. Patty’s third-person memoir also makes the rest of the book feel less focused. Her fury stems partly from her parents’ mishandling of the aftermath of a sexual assault Patty endured in high school — a fury that may also fuel some of the ills (infidelity, for one) that nibble away at the Berglunds’ marriage over the next few decades. However, does it follow, as Franzen seems to suggest, that every member of this couple’s generation experiences a similar degree of retrospective pessimism?

As Freedom wanes, so do Patty and Walter. Patty becomes a washed-out gym rat in late middle age, Walter a corporate tool. Yet they still have a surprise or two up their frayed sleeves. After a 576-page novel that plumbs mid-aughts American politics — Joey Berglund earns thousands of dollars a month writing neoconservative screeds; the now-business-suited but still-über-environmental Walter Berglund obsesses over a warbler’s survival—what ultimately makes Freedom worth reading is the author’s nuanced portrait of the state of love as its practitioners close in on 60. As Franzen and his older (and newly wiser) characters know — and show — Janis Joplin got it right when she sang, “Freedom’s just another word for / nothin’ left to lose.”

Bethanne Patrick is the editor of The WETA Book Studio; she tweets @TheBookMaven.