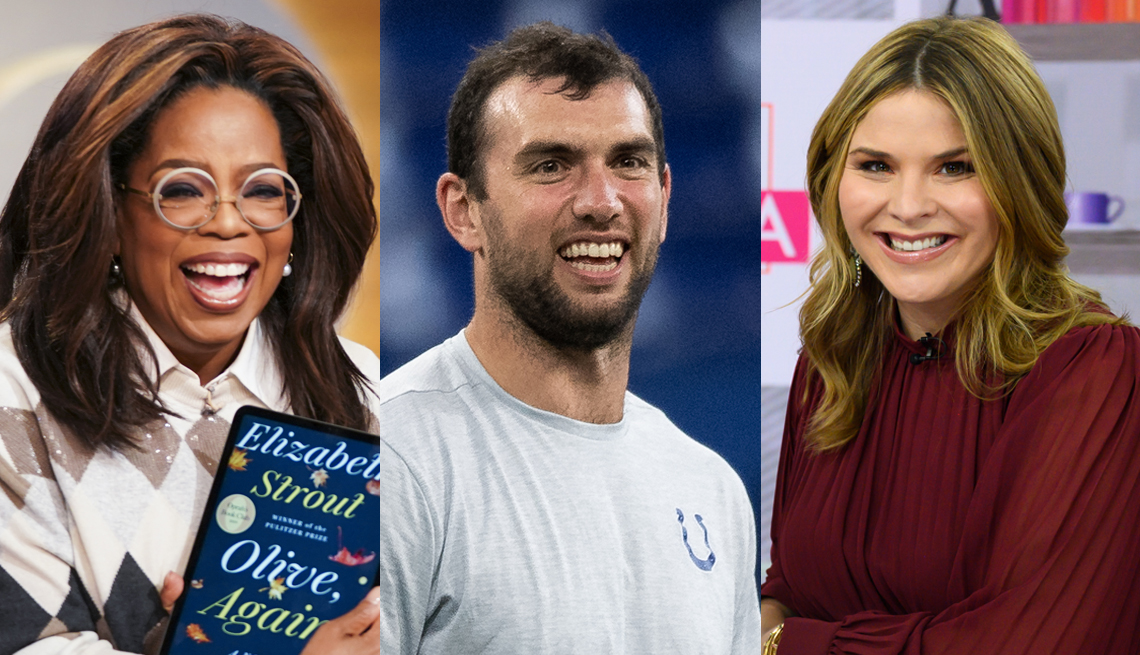 As Oprah Winfrey declared in April, “There's no better time to read, ya'll.” With so many of us trying to fill time at home, and in-person book discussions generally on hold, Oprah's Book Club and other virtual groups offer a fun way to converse with fellow readers, hear from writers and maybe even inspire you to try a new genre or author. Here are nine online clubs where you can join the discussion — or quietly explore for some fantastic book suggestions.

The former Indianapolis Colts’ quarterback is a big-time reader and was once dubbed “the NFL's official librarian” by the Wall Street Journal. Friends and family frequently asked Luck, 30, for his reading recommendations, so he started a book club in 2016 that offers a huge range of titles, some of them classics, others just his own quirky favorites. He offers two selections at a time: One for “Rookies” (young readers), the other for “Veterans” (adults). Recent adult picks were the Pulitzer Prize-winning 2018 novel The Overstory, by Richard Powers, and another acclaimed 2018 book, The Last Palace: Europe's Turbulent Century in Five Lives and One Legendary House, by Norman Eisen, America's former ambassador in Prague. Luck also interviews authors for a podcast that appears on the home page. You don't have to officially join — just read the books and post comments by using the hashtag #ALBookClub on Facebook, Instagram and Twitter.

The Girlfriend, AARP's newsletter and website for women 40 and older, offers a private Facebook-only book club with 5,000 members and counting — but anyone can join. It's fun and lively and packed with mostly female bibliophiles. Each month, the club focuses on a different book that was chosen through a Facebook poll, and authors participate in a live Facebook chat (which occurs on the third Tuesday of each month). This year, members are reading, among others, the new novel The Book of Longings, by Sue Monk Kidd (read an excerpt); In Five Years, by Rebecca Serle; and the new beach read Big Summer, by Jennifer Weiner. It's an amiable community where members offer suggestions to anyone looking for their next binge-worthy book. It also has frequent free book giveaways.

The best book recommendations come from friends, Goodreads.com founder Otis Chandler believes. And with 90 million members, the site offers lots of potential pals who want to talk about books they love (or don't love). Goodread's online groups focus on everything from romance to travel books, but if you want a broad mix of titles — and are less interested in finding a cozy community than great reading recommendations — check out the nearly 13,000-member Goodreads Choice Awards Book Club. The group focuses on books that have won the site's best-of-the-year awards (as determined by Goodreads members). Members are currently reading the top picks from 2019, including The Testaments, by Margaret Atwood, her sequel to The Handmaid's Tale; Daisy Jones & The Six, by Taylor Jenkins Reid (the historical fiction favorite); and Caitlin Doughty's Will My Cat Eat My Eyeballs? Big Questions From Tiny Mortals About Death (the science and technology winner). To enter the conversation, just start or add to a discussion thread on the site.

Each month, this PBS NewsHour—New York Times club focuses on one work of fiction or nonfiction “that helps us make sense of today's world.” Recent selections include Julia Phillips’ novel Disappearing Earth (a 2019 National Book Award finalist that's set in eastern Russia); The Street, a reissued novel by Ann Petry that is set in World War II-era Harlem and was originally published in 1946; and Dani Shapiro's wonderful 2019 memoir Inheritance (the story of how a DNA test upended her world). The club's choices tend to be already out in paperback, which makes them a little more affordable if you can't find them in your local library. You can use online discussion guides — useful if you're interested in adopting their picks for your own book club — and author profiles. The author also answers reader-submitted questions at the end of the month on PBS NewsHour. You can join the club through its Facebook group or by signing up for the book club newsletter.

Oprah Winfrey's book club is arguably America's most influential literary hit-maker, turning unknown titles into massive best sellers — from its early days on The Oprah Winfrey Show to its rebirth in 2012 in the pages of her magazine as “Oprah's Book Club 2.0.” While some may snub their nose at her mass-market appeal, Winfrey has awfully good taste in books — so you can hardly go wrong if you turn to the more than 80 books she's chosen through the years. Recent selections have included Olive, Again, Elizabeth Strout's worthy follow-up to Olive Kitteridge; Ta-Nahesi Coates’ 2019 novel The Water Dancer; and 2020's best-selling Hidden Valley Road: Inside the Mind of an American Family, a gripping nonfiction story by Robert Kolker about a family with 12 children, six of whom were diagnosed with schizophrenia. You can sign up for the book club newsletter and see videos of Oprah with authors and others — including a chat with an expert on schizophrenia — on Facebook and Instagram. Last year, Winfrey partnered with Apple Books and began premiering her author interviews on Apple TV+.

This club chose a timely read for May: the best-selling pandemic novel Station Eleven (2014), by Emily St. John Mandel. (The club will also feature her latest novel, The Glass Hotel.) Author and veteran news editor Donna Wares hosts the club, and the Times runs articles related to book selection topics. The club also hosts a community event with each author: Mandel will appear in a livestreamed event on YouTube and the Times’ Facebook page on May 19 at 7 p.m. PT (readers can submit questions). The selections often feature a California angle, such as the recent Always Home: A Daughter's Recipes & Stories, by Fanny Singer (read an excerpt), which focuses on life with her well-known mom, Berkeley, California, chef and restaurateur Alice Waters (an April chat with Waters and Singer is on YouTube). Sign up for a newsletter on the book club site.

When Today show cohost Jenna Bush Hager launched her book club in 2019, it seemed like a perfect fit. Hager is a lifelong bibliophile and her mother, former first lady Laura Bush, has launched a foundation to assist America's libraries, one of her multiple literary endeavors. Hager's club picks a new book every month, sometimes including ones by new authors (Valentine, by Elizabeth Wetmore), as well as literary faves such as Lily King and her recent novel Writers & Lovers. The book club site, housed under the Today show umbrella, offers discussion questions, author interviews, other book recommendations and a list of previous book club selections. Readers can sign up for a newsletter and post their book comments on Facebook and Instagram by using the hashtag #ReadWithJenna.

Before you dismiss Reese Witherspoon's book club as some Hollywood vanity project, consider this: Many of her picks rise to the New York Times Best Sellers list, and she has excellent literary taste. Each book centers around a woman's story, such as Untamed, by Glennon Doyle, a memoir and rallying cry for confident, strong women; and The Henna Artist, by Alka Joshi, a debut novel about an Indian woman's journey after escaping an abusive marriage. To learn each month's pick and chat about the selections, follow @ReesesBookClub on Instagram (where the club has 1.5 million followers), Facebook and Twitter. You can also find her three-year list of selections — starting with her first pick, Eleanor Oliphant Is Completely Fine, by Gail Honeyman — on her media company's site, Hello Sunshine.