Oh, joy! The forecast calls for sun today and tomorrow — maybe even through the weekend! Our spirits rise as we reach for the sunglasses and stow the umbrella in the closet.

If you’re like me, you ordinarily give the sun no more thought than that — brolly or shades? But Bob Berman’s lively new book, The Sun’s Heartbeat and Other Stories from the Life of the Star That Powers Our Planet, invites us to think again. Directly or indirectly, writes Berman, the sun “affects our lives, our health, our emotions, and even our dollars.” He offers a number of fresh perspectives — on the everyday miracle of sight, on the importance of spending time in the sun, on the reality of global climate change. Rounding out his solar bio is a concise and engaging history of the sun’s birth and inevitable demise.

See also: When the Sun Makes You Sick.

How is our ability to see related to the nearest star? “We essentially scan the universe through the sun’s eyes,” Berman lyrically puts it. “Our retinas and brains are built to ‘sun specs.’” For instance, our vision is sharpest in the green part of the spectrum, where humans can detect about 50 different shades. Green also happens to be the color emitted most strongly by the sun. Coincidence? Don’t bet on it, says Berman.

Contrary to the medical advice we’ve heeded for years, he writes, the vast majority of us should not only regularly spend time in direct sunlight, we should do so without sunscreen. Starting about 30 years ago, the fear of skin cancer and the advent of sunblock lotions dovetailed to drastically lower people’s solar exposure. (Our widening fondness for Web surfing and TV viewing played no small role, too.) As a result of these trends, Berman writes, citing research by the Vitamin D Council, “virtually all of the population of the United States, Canada and northern Europe” is now seriously deficient in vitamin D, an essential nutrient that our bodies manufacture when skin is exposed to the sun’s ultraviolet rays.

Acknowledging that melanoma is a justifiable concern for anyone at high risk for it, Berman nonetheless argues that the health hazards of a vitamin D deficiency — notably rickets and osteoporosis, as well as autoimmune diseases, asthma, some cancers and possibly even depression  — outweigh the slimmer chances of skin cancer.

It’s not that Berman advocates limitless unprotected sunbathing, mind you: “There’s no need to fry.” He does urge us to get outdoors — in the sun — on a regular basis, however. Passing along the advice of vitamin D researchers, Berman reports, “Unless you have a very light complexion and blond or red hair, you should be able to expose yourself safely to ten to twenty minutes of strong sunlight at a time.” During winter at high latitudes, much more sun is necessary — and probably a vitamin D supplement as well. Why not just take supplements alone? Largely because, in the words of one Vitamin D Council researcher, “I suspect we do not know everything [about supplements]. Natural sunlight has to be the preferred route whenever possible.”

As he retraces our understanding of the sun’s role in global climate change and the current outlook for the planet, Berman pulls no punches. The sun’s periodic brightening and dimming was once the biggest determinant of Earth’s climate. This solar influence has since been eclipsed by steadily rising levels of carbon dioxide caused by human activity. “If carbon emissions go unchecked,” writes Berman, “all indicators predict positive feedback loops. … Climate change will then be irreversible, no matter what we do.”

Next: Berman’s message is not all gloom and doom. >> 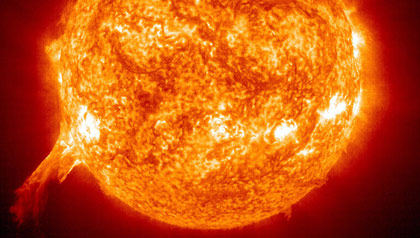 An eruptive prominence A massive solar eruption is shown being blasted away from the Sun.

But Berman’s message is not all gloom and doom. The Sun’s Heartbeat also abounds with lighthearted “news you can use.” Berman comes to the rescue of parents (and grandparents) of hyper-inquisitive youngsters everywhere by answering such perennial questions as “Why is grass green?” (because grass absorbs blue and red light in order to grow, but reflects green) and “Why does the sun shine?” (because it’s busy smashing hydrogen protons together, producing light — along with heat and helium). He also solves a couple of multicolored koans: “What’s at the center of a rainbow?” (sorry, but I’m not giving that one away) and “If nobody sees it, is a rainbow there?” (the short answer is no, with Berman convincingly explaining why not).

Depending on your sense of humor and possibly your age, Berman’s asides will elicit chuckles or groans. On the subject of deuteranopes (creatures, usually male, who cannot differentiate between red and green) he writes, “Deuteranopes can easily run traffic lights if the bulbs are in unfamiliar positions. It turns out that dogs and elephants are deuteranopes, too. It’s one of the reasons we should never let them drive.”

In the chapter titled “The Weather Outside Is Frightful,” Berman describes the phenomenon known as space weather — which really means explosions of charged solar particles shooting toward Earth. During years around sunspot maximum (a key aspect of the solar heartbeat), vast quantities of material from solar flares and coronal mass ejections (CMEs) can trigger geomagnetic storms. These agitations of Earth’s magnetic field not only produce gorgeous auroras but can short out large swaths of the country’s electric grid, fry the brains of satellites in orbit, endanger passengers on polar flights and corrode oil pipelines in Alaska by sending high-voltage electricity surging along the ground.

Given society’s increasing dependence on electronic gadgetry of every stripe, paying attention to the solar weather report may turn out to be just as vital as checking to see whether you’ll need that umbrella today.

Roberta Conlan, an editor and writer who founded the book packager EdiGraphics, divides her time between Virginia and Hawaii.