Pete Hamill’s 11th novel, Tabloid City, is a crime story — and its twist, for better or worse, is that it keeps you wondering which corpse you’re supposed to care about most.

Should it be the socialite who is killed one evening in Manhattan?

Or the young woman who dies in labor after she’s locked in a  room by her jihadist boyfriend?

Or might the body in question be more of an abstraction? Over the course of this hyperactive novel, Hamill suggests we are witnessing the death of reading, the death of art, even the death of working-class dignity. Regardless, the book’s most intriguing corpse — the one we meet first, and the one Hamill spends the most time palpating — is journalism, symbolized by the fictional afternoon daily newspaper whose throat gets cut halfway through the action.

If anyone has earned the right to make broad statements about the profession, it’s the 75-year-old Hamill. As a reporter and editor for tabloids such as the New York Post and New York Daily News from 1960 to 2003, Hamill specialized in the sort of blood-in-the-gutter fare that once made papers fly off newsstands. His skilled emotional observation yielded brash, deeply researched stories about boxers, mafiosi and movie stars, not to mention Pete Hamill himself: A Drinking Life (1993) is a classic of the memoir genre.

As it happens, the hero of Tabloid City bears some decidedly Hamillesque traits: Sam Briscoe, editor-in-chief of the New York World, indulges in occasional reveries about the good old days of newspapering and “the tabloid joy of murder at a good address.” But there’s little time for war stories: In the course of the novel’s 24 wintry hours in Manhattan, Sam will lose his paper, a former lover and his general sense of well-being.

The “murder at a good address” involves Cynthia Harding, a fundraiser for the New York Public Library, who is fatally stabbed in her Greenwich Village home along with her assistant, Mary Lou Watson. From this grisly hub radiate some convenient spokes: Mary Lou’s son is a militant Muslim whose father happens to sit on the NYPD’s anti-terrorism task force. Sam and Cynthia, meanwhile, turn out to be former lovers.

Devoted thriller readers will easily tolerate those co-inky-dinks. Tougher to swallow is that the murder allegedly propelling the plot does not occur until 100 pages in. Rather than using that stretch of prose to create an intricate web of intrigue, Hamill gives us chapters featuring two, three … 14 different characters.

Next: Hamill takes a swipe at the New York City art world. >> 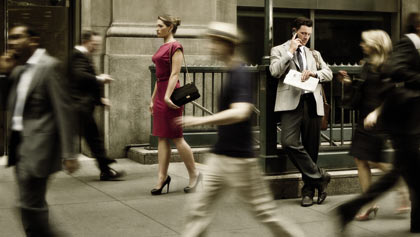 "For a novel that laments the death of old media, Tabloid City behaves a lot like a newfangled news aggregator."

These multiple protagonists often feel less like human beings than spokespeople: Helen Loomis is an old-school crime reporter who misses the days when she could smoke in the newsroom. Myles Compton is a hedge-fund manager angling to flee the country after perpetrating a Madoffian fraud. Beverly Starr is an artist who reminds us that comic strips were big and splashy on newsprint before the Web smashed them to pixels. Josh Thompson is an angry paraplegic Iraq war vet concealing a MAC-10 in his wheelchair. And in a class to himself is Freddie Wheeler, a former World reporter turned gossip blogger who breaks the news that their beloved daily is shutting down and will henceforth appear only online. Hamill’s chosen tone for this character is a mix of Walter Winchell and Boris Badenov: “In a few hours … must raise a fist in the air … and curse Briscoe … and proclaim the end of the World.”

For a novel that laments the death of old media, Tabloid City behaves a lot like a newfangled news aggregator, earnestly striving to capture a universe of perspectives in a single digital corral. Yet charming moments bubble up within that unwieldy structure. Through Lew Forrest, an aging artist who now lives in the Hotel Chelsea (and financially supports a down-on-her-luck former muse), Hamill takes a swipe at a New York City art world that has grown greedy and highfalutin. And Hamill can effortlessly summon the clipped, prickly language of a James Ellroy or a Richard Price: “His head throbs. Two dead. Stabbed and sliced. Fresh blood on the floor. Eyes wide in shock, for sure.” A few fine sentences display a noirish glint: As Helen smokes her precious Marlboro Lights inside her East Village apartment, for example, she recalls the criminals she wrote about, “all of them pleading Guilty, With an Explanation. The title of every human being’s biography.”

Savor such lines, for Tabloid City will soon be rushing toward its contrived conclusion at a mosque-turned-nightclub.

In Hamill’s introduction to Piecework, the 1996 collection of his journalism that is still the best place to get to know him, the author recalls striving to write the way Gene Krupa played drums: “I wanted that rhythm in the sentences,” he tells us. “I wanted to add some gaudy word to serve for splash on the cymbals.” But syncopating a dozen or so characters and social commentaries can tax the timekeeping powers of even the best writer.