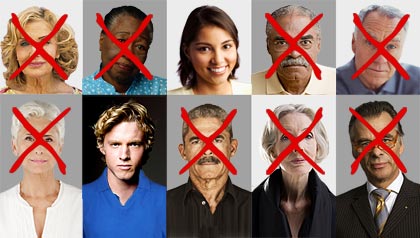 Companies not seeking longtime unemployed, a bias that spells trouble for 55-plus.

Talk about adding insult to injury: Unemployed workers face yet another hurdle in the post-recession job hunt.

Some online listings at Careerbuilder, Craigslist, Monster and other websites flatly state "must be currently employed," or "the unemployed will not be considered at all."

Some with a bit more flexibility say that applicants can be unemployed for up to three months, a caveat that spells trouble for 55-plus job hunters, who on average are out of work for one year.

Although there are no statistics on the exclusion of the unemployed from the hiring process, such language is easy to find in online listings and is not specific to any industry, says Judy Conti, a lobbyist for the Washington-based National Employment Law Project (NELP).

"We've found 60 such listings in the last month for jobs ranging from restaurant manager to engineers," she said. "Older unemployed workers tell us they feel like they have been blacklisted."

Some companies, she adds, even use code words such as "vibrant work history" or "current skills" to signal their preferences to recruiters for young, employed, tech-savvy workers. "Must have small hands" could be code for an attractive young female candidate.

'Must be young or young at heart'

Requirements in a recent Careerbuilder listing for a $60,000 restaurant manager job at an unnamed casual-dining chain in Shreveport, La., include "must be currently employed in restaurants or recently unemployed (1-3 months)" as well as being "young or young at heart."

"Our searches are confidential because our clients don't want to be bombarded with résumés," says a recruiter at the Minneapolis-based firm that handled the listing and requested anonymity. "With the bad economy, employers can be more picky."

"Human resource departments are telling recruiters and staffing agencies not to waste their time sending applications from people out of work six months or longer," he says. "Recruiters are getting chastised for it, no matter how perfect the individual's qualifications for the job." Companies' primary concern, he adds, is that unemployed individuals' skills are out of date and retraining would cost money.

"What's different is companies are bold enough to state it in job descriptions because there's so much talent available now. Hiring managers assume employed workers must be better to have survived the current economic Darwinism."

The unemployed are not considered a protected class under U.S. law, so excluding them from hiring is not illegal, says NELP's Conti. However, such practices may disproportionately affect various population groups — older workers, women, people of color and people with disabilities — who are protected.

New Jersey just passed a law banning online and print advertisements that discriminate against the unemployed, and other legislation has been introduced in Congress.

"The New Jersey law is well-intentioned, but it doesn't go far enough," says Conti. "Just because you can't run an ad doesn't mean you can't discriminate in hiring. This could drive the practice further underground."

Conti's organization is working on a bill that would ban such discrimination and ensure that unemployed workers receive the same consideration as employed workers in hiring.

"I networked as much as I could because at my age almost 90 percent of jobs come through networking," says White, who was downsized in January 2010 after more than two decades in the banking and finance industries. He devoted more than 40 hours a week to online research and job support meetings where he honed interview skills and learned the latest electronic job-hunting techniques.

White was also accepted for a four-month fellowship program with Encore!Hartford, a program through the University of Connecticut that trains corporate executives for new professional positions in the nonprofit sector through classes, job shadowing and two-month unpaid internships.

"The fellowship really got my creative juices going when I was beginning to flag," he said. "I learned to recast my résumé to appeal to the nonprofit sector, which is more interested in your skills than your age."

Despite his overtures to nonprofits, White was hired as a lending officer in a financial institution in April. "What worked was fine tuning my résumé and cover letter for every job," he says. "I used key words from the job description so the computer software would not reject the initial application." In interviews, he was primed to answer any questions with detailed stories of his problem-solving prowess.

Next: Advice for the long-term unemployed. >>

Advice for the long-term unemployed

Ignore companies that exclude the unemployed and focus on organizations that are friendly to older workers, says reCareered.com's Phil Rosenberg. "SimplyHired.com's advanced search feature filters jobs by companies that are 50-plus-friendly," he says. "Look for industries like health care, financial services and retail that cater to older customers. They are more likely to hire older workers." Companies on AARP's National Employer Team also value mature workers

Nonprofit organizations are ripe with potential for age 50-plus adults, says David Garvey, director of Encore!Hartford. "Nonprofits view seasoned professionals as a new pool of resources," he adds. Nearly 80 percent of Encore!Hartford's graduates have found work, according to Garvey.

Employee referrals produce the highest number of hires of any recruiting source, says John Sullivan of San Francisco State University. You should network in job support groups and use social media websites such as Facebook and LinkedIn to find contacts within a target company.

Tough times call for tough tactics, adds Sullivan. Disguise your unemployed status by keeping your résumé updated to when you were employed or using open-ended dates (or leave them off). In the interview you can say "I was too busy to update the résumé" and then explain your work status.

"Never use the word 'laid-off' in a cover letter or résumé," he says. "In the interview, you mention you were 'riffed' or that the company had a reduction in force. That's good business speak."