For all intents and purposes, the United States is getting out of the manned space game: The shuttle's final launch is scheduled for late June, and aside from planned voyages by private companies and visits to the International Space Station, America now needs no astronauts, or people to train them and support them.

"For the last 20 years it's been pretty stable," says David Wolf, 54, who flew four missions. "Now with these major changes, we're really seeing a rash of retirements and going-away parties. A lot of people are just forced to move on. It's really hard in these times of big changes." 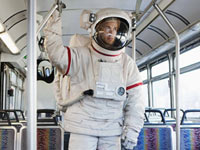 So how does midlife recareering work for the shuttle crowd?

Last summer, 57-year-old NASA research pilot Charlie Justiz received the figurative gold watch at his going-away party before a crowd of 300 at Johnson Space Center in Houston. Members of shuttle crews he helped train passed around the microphone and roasted him, and in a video tribute some astronauts training in Russia performed a parody of the cult TV show Mystery Science Theater 3000.

Now, instead of teaching astronauts how to land the shuttle in a Gulfstream II flying simulator or introducing crews to weightlessness in NASA's "vomit comet" zero-gravity simulator, Justiz will run a fleet of business aircraft for a large Internet company (which he's not at liberty to name just yet).

At least one astronaut hasn't announced plans past his final space flight. Mark Kelly will command a mission by the Endeavor shuttle scheduled to launch on April 29. For a while it wasn't clear that he'd go — his wife, U.S. Rep. Gabrielle Giffords, D-Ariz., was gravely wounded in a Jan. 8 shooting in Tucson. But later that month, he announced that he would go ahead, and there are now tentative plans for the convalescing Giffords to attend the launch.

As a group, astronauts are highly educated, highly competent, highly confident. And yet they face the same challenges the rest of us do when they're forced to change careers in midstream.

A one-day seminar presented by the Association of Space Explorers offered astronauts the following recommendations: Polish up your resumé and reformat it in a way that fits the job you're applying for. And reach out to your network.

"The networking thing is important as we grow older," Wolf says. "Astronauts are no exception. They're the same as anybody else who needs to move on."

Wolf, however, is remaining with NASA for the time being. A doctor as well as an astronaut, he's conducting research on tissue regeneration that may one day allow growth of new heart, cartilage and brain tissue, which wear out over the decades.

But others continue to bail out. Astronaut Pam Melroy, 49, veteran of three shuttle flights, saw the writing on the wall early on. She left NASA in August 2009 to become deputy program manager for Lockheed Martin's Orion space travel project.

"I felt like I needed to learn something that I didn't know how to do," she explains. "I had been working on Orion from the astronaut office, and I wanted to get closer to the program. I'm passionate about human space flight, so it made really good sense."

In early 2010, President Obama canceled a program meant to return humans to the moon and take them to Mars, and with it went the hardware to do the job, the Ares rocket booster and the Orion six-person crew capsule meant to launch sometime in the middle of the next decade. The government earmarked $15 million to help staff get additional training and search for new jobs.

But shortly after, Obama reinstated Orion as an escape vehicle for the International Space Station. "We're back in the game," she declares.

For the 350 employees under her, that comes as a relief.

Melroy is optimistic by nature — every astronaut exhales the quality like CO2. Starting a new career is "an opportunity for personal growth, maybe to do something you've always been passionate about. At our age, if you're passionate about something, you're more likely to be good at it," she says.

Take Leroy Chiao, 50 a veteran of four flights. "I worked for someone else my whole life," he says. "I wanted do my own thing." Chiao stuck close to what he knew best and joined Excalibur, a commercial space company. He also became a panel chairman at the National Space Biomedical Research Institute, a consultant and a speaker.

"The biggest difference is, every phone call I'm on is important. Now all the emails I receive are important," Chiao says. "Whenever you're doing your own thing, by definition you're always working."

Some shuttle astronauts left NASA even before the agency decided to abandon crewed space flight.

Tom Henricks, 57, retired in 1997 after his fourth shuttle mission. "I loved what I was doing," he says. "But I sat down facing my wife and three kids, and I said, 'Dad can stay with NASA and fly in space again or he can leave NASA, but that would most likely mean leaving Houston.' They all agreed that moving was better than flying. That's when it struck me that even as kids they knew how dangerous it is."

Henricks is now CEO of Henricks Enterprises Inc. and a consultant with Corporate Aviation Analysis & Planning Inc., in Dallas, Texas.

Next: "Keep the attitude of a younger person." >>

One more chunk of advice: "Don't ever grow up. We may all be getting older, but you don't have to feel it. ... the idea of a 25-year-old being trapped in a 58-year-old body. Keep the attitude of a younger person."

Over the years, other astronauts, have found themselves in effect laid off. "I did not retire, my career was terminated," says 76-year-old Story Musgrave.

Back when he was just 62, Musgrave was the oldest active astronaut, and he'd logged more hours that anyone when it came to repairing the Hubble Space Telescope. But then NASA "said it's the end of the road," he says. "I had six flights. I could have done a lot more there. I was the lead person to fix the telescope. But after my last flight, they told me: No more, that was it. They didn't offer me anything else."

After NASA handed him the pink slip, he had no job, just gumption. He started a landscaping business, a media production company and a real estate development company.

"There is a cruel depression within the building business; there's no building going on," he says, but adds that "the whole real estate world looks like it's turning the corner."

"I have not stopped, I haven't even slowed down," he says. "I guess I have confidence. I leap off the cliff and hope I get some wings as I go down. I don't mind reinventing myself."