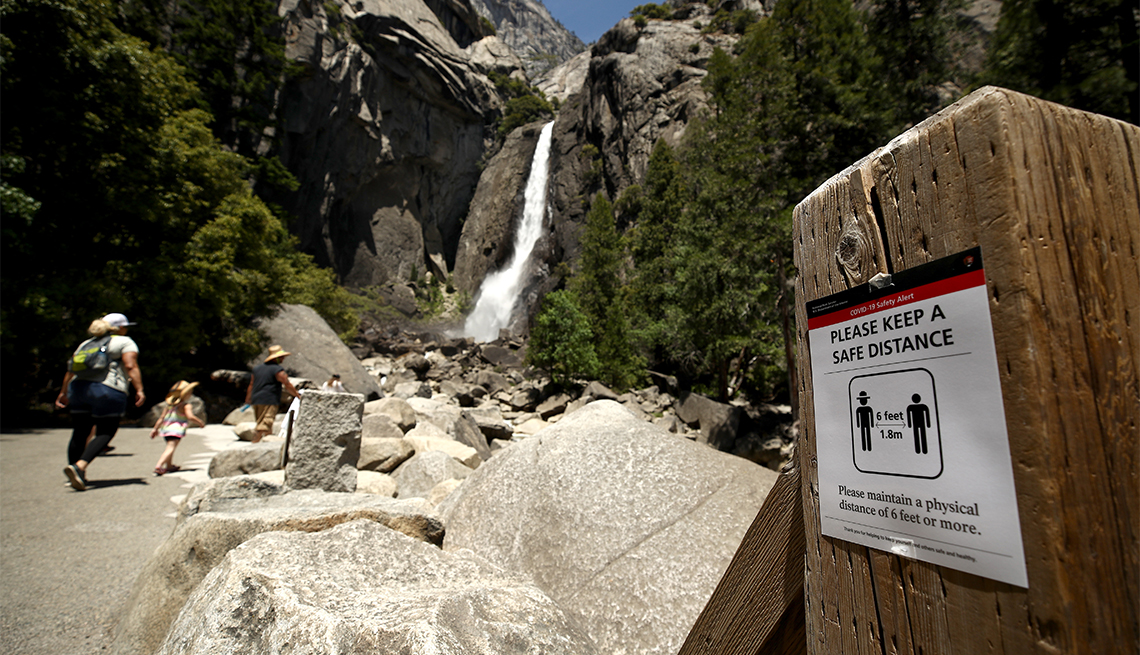 En español | For an America longing for the outdoors after many weeks at home during the coronavirus outbreak, our national parks may seem like an ideal escape. The good news is that while most of the 62 parks were at least partly closed this spring, now the National Park Service is “increasing access and services in a phased approach.”

But visiting will be a little different than it was pre-COVID-19: Park Service officials say they plan to implement restrictions that keep in mind Centers for Disease Control and Prevention (CDC) guidance and state and local regulations, while, as always, protecting wildlife and natural areas. They are also asking visitors to follow social distancing practices, and you may find changes such as plexiglass shields in visitor centers and stores to protect against coronavirus transmission.

One challenge for parks this summer could be training and housing seasonal workers, says Phil Francis, chair of the Coalition to Protect America’s National Parks. At parks that provide housing, units that typically house multiple employees will now house one because of distancing requirements. That could lead to a shortage of seasonal workers, which could reduce services such as interpretive programs, he says.

On the bright side, there may be rooms available at lodges that are usually booked months before the summer season begins. “There is rare availability in the national parks this summer,” Betsy O’Rourke, chief marketing officer for Xanterra, the company that runs the concessions and lodging in many big parks (such as El Tovar in the Grand Canyon and the Oasis at Death Valley), said in a statement. She pointed to this year’s lack of international visitors, who usually flock to the parks.

Here’s what visitors can expect at some of the big parks, and information on whether visiting these destinations is safe for you, for park workers and for communities. (Note: Before visiting a specific National Park Service site, be sure to check its web page for updates and alerts.)

Can I go to a national park?

Among the first parks to welcome back visitors was Alaska’s Denali National Park, which reopened April 28. Now most parks, including hugely popular ones such as Yellowstone, Yosemite and the Grand Canyon, are opening, often in phases, with many facilities closed and limited lodging options.

Acadia: The Park Loop Road and most hiking trails are open, and carriage roads are open for pedestrians only, as repairs are being made after winter storm damage. You’ll need to buy an entrance pass online and print it before you go. Campgrounds are closed; the Jordan Pond House Restaurant is open for takeout only. The park asks visitors to “adjust expectations,” practice social distancing and “not rely upon site staff to ensure their protection from contagious disease.”

Note that Maine still has a 14-day quarantine rule in effect for out-of-state visitors, with gatherings of 50 people or more prohibited.

Grand Canyon: The park is contending with a wildfire near the North Rim, so the North Entrance is temporarily closed. At the South Rim, visitors can enter the park through the South Entrance Station 24 hours a day (for a while it was open only between 6 and 10 a.m.). The park isn’t issuing new overnight camping permits for the inner canyon, nor for Mather Campground. South Rim shuttle buses aren’t running, ranger programs are canceled, and most visitor centers and museums are closed.

Many of the Grand Canyon lodges, including the popular Bright Angel and El Tovar, are now open, but some, including Thunderbird Lodge and Phantom Ranch, remain closed.

Yellowstone: The park has been testing its employees for COVID-19 and on June 11 reported that all 179 tested were negative. Officials plan to continue testing throughout the summer. Both the Wyoming and Montana entrances are now open, as is the big loop road connecting visitors to major sites such as Old Faithful. But only cabin-style accommodations are available in the park, which is encouraging day-trip visitors to dramatically limit crowds. (In early June the park reported about half the number of visitors it received in the same period last year.)

Visitor centers are closed. Restrooms, gas stations and some trails and stores are open; backcountry camping is now allowed; food service is “grab-and-go.”

Yosemite: To reduce crowding, Yosemite is allowing visitors to drive into the park only if they have reservations (even for those who have annual or lifetime passes). It’s accepting 3,600 vehicles a day, about half the number it welcomed in June 2019. You need either a wilderness permit for backpacking, a camping or lodging reservation, or a day-use entrance reservation, made at recreation.gov, available at 7 a.m. Pacific time on the first of each month for dates that month and the next. (See more information here.)

Only Upper Pines Campground (at 50 percent capacity) and Wawona Horse Camp are open. Yosemite Valley Lodge, Curry Village and the Ahwahnee are open as well.

Roads, gas stations, restrooms and most trails are open, though the park asks hikers to keep their distance from others. Visitor centers are closed, only some food service is available, and there are limited ranger programs.

The Park Service manages 419 sites — from national parks to national seashores — and 224 were completely closed due to the pandemic, according to the National Parks Conservation Association. The Park Service largely closed locations that attracted crowds in confined spaces, including the Washington Monument, the Statue of Liberty National Monument and Ellis Island, Alcatraz Island and Pearl Harbor National Memorial (none of those sites has announced plans to reopen). Open-air monuments such as Mount Rushmore are open.

Most national battlefields managed by the Park Service — from Antietam to Stones River — are open, though facilities like visitor centers and observation towers are still closed. Many national seashores, such as Assateague Island in Maryland and Virginia, are open, with no lifeguards on duty and limited parking (due to construction). While restrooms and other facilities at Cape Cod National Seashore in Massachusetts are still closed, the popular beaches, such as Coast Guard and Marconi beaches, trails and parking lots are open. Note that Cape Cod is asking visitors to place beach blankets at least 12 feet from others to help with social distancing. The seashore’s Salt Pond Visitor Center is closed.

The Park Service maintains a frequently updated list of closures and alerts that includes battlefields, monuments and seashores.

Francis from the Coalition to Protect America’s National Parks says the organization has been against parks’ opening until the safety of Park Service employees, concessionaires, volunteers and nearby towns can be ensured. Residents of these towns — often called gateway communities — have expressed mixed feelings about reopening, he notes. They’re worried about the economic impact of a continued shutdown, but they’re equally concerned that tourists will bring COVID-19 to areas ill equipped to manage a pandemic. If you visit a gateway community, don’t expect business as usual. In Gatlinburg, Tennessee, for example, near Great Smoky Mountains National Park, some stores and attractions remain closed and some restaurants are operating at half their normal seating capacity.

And if you visit a park, follow social distancing guidelines. “Taking a rigorous walk in the fresh air is healthy, as long as it’s not in a group and you’re spaced apart,” says Janis Orlowski, M.D., chief health care officer for the Association of American Medical Colleges. The Centers for Disease Control and Prevention also offers guidelines on visiting parks and recreational facilities. Those include checking with the park in advance “to be sure you know which areas or services are open, such as visitors’ centers, bathroom facilities, and concessions, and bring what you need with you, such as hand sanitizer or other supplies to maintain proper hygiene.”

If you want to see natural wonders from the safety of your couch — and without endangering communities — the Park Service offers a variety of wildlife webcam and video options. Multiple national parks offer webcams, including Crater Lake, Glacier, Mount Rainier, Yellowstone and Yosemite, as do national monuments such as the Statue of Liberty (you can even watch the sun rise on Manhattan). Channel Islands National Park offers everything from webcams of bald eagle nests to broadcasts from divers who serve as underwater tour guides. You can also take a virtual tour of the USS Constitution in Boston.

EdItor's note: This story was originally published on March 25, 2020. It's been updated to reflect recent coronavirus developments.