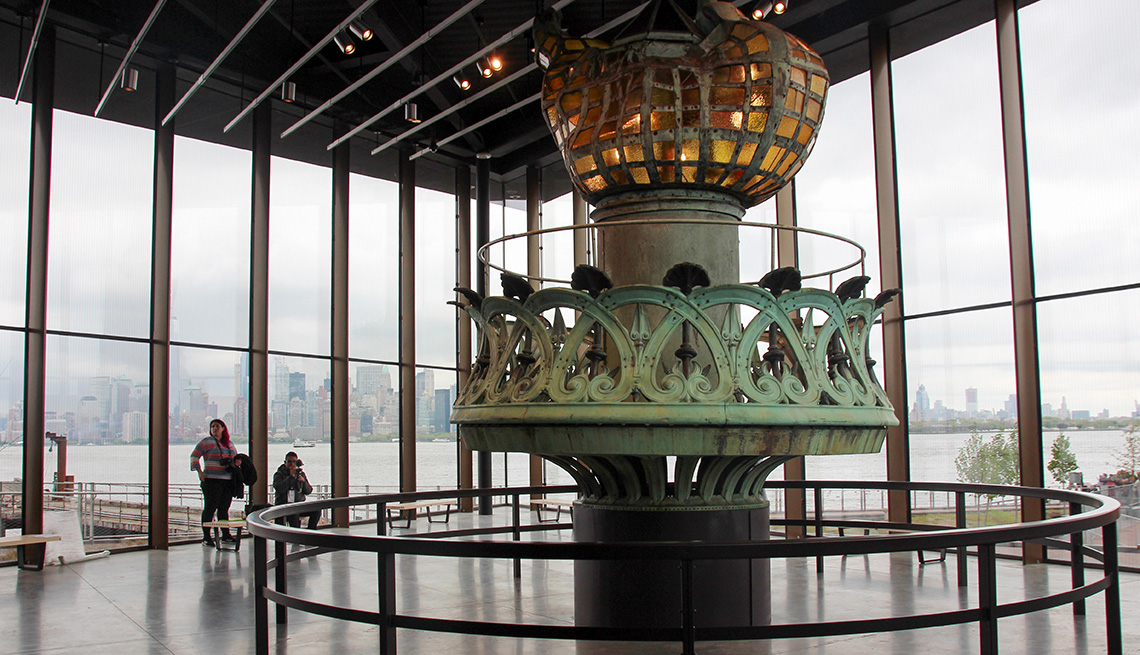 En español | Since the Statue of Liberty was dedicated in New York Harbor in 1886, there have been only minor changes in the visitor experience — until now, with the splashy opening of the grand new Statue of Liberty Museum this month.

The two-year $70 million project by the National Park Service and the Statue of Liberty-Ellis Island Foundation was a long needed upgrade to the previous museum. Wedged into the basement of the 225-ton statue, it was more of an exhibition space, so cramped and crowded that only 20 percent of the 4.5 million annual visitors to Liberty Island were able (or bothered) to access the museum. It also required a separate ticket.

Entrance to the sleek new 26,000-square foot museum and the statue, a national monument, is included in the ferry ticket from Battery Park in Lower Manhattan. (The ticket “with pedestal” access is $9 for children ages 4 to 12; $18.50 for ages 13 to 61; $14 for adults 62 and older, including a visit to Ellis Island, from StatueCruises.com.) On the 15-minute ride to Liberty Island, the museum — on the island's western shores behind the statue — appears folded into the knoll it occupies, with a facade of glass and pale wood, wrapped in greenery and gardens.

The museum experience takes about 45 minutes, accompanied by an audio guide (available in 12 languages).

The space is divided into three sections. After entry into the light-filled foyer, visitors begin with the Immersion Theater and a 10-minute wide-screen film narrated by Diane Sawyer about the statue's conception by French sculptor Frédéric-Auguste Bartholdi, who based Lady Liberty on the Roman goddess Libertas, as well as its construction and enormous cultural significance. The camera sweeps you into and up the inside of the 150-foot-tall statue.

The emphasis here (and throughout the museum) is on the enduring concept of liberty in the U.S. and around the globe.

Next is the Engagement Gallery, which employs a workshop motif to detail the creation process overseen by Bartholdi and his team of designers, as well as the significant contribution of French architect Alexandre-Gustave Eiffel (yes, that Eiffel!) in creating the statue's internal structure. This gallery also features a history of the statue — through artifacts, photos and film — as a cultural icon.

The tour ends in the Inspiration Gallery, offering sweeping views of the harbor through the floor-to-ceiling windows and the chance to touch an original model of the statue's face — its nose is four feet long — as well as the chance to see the original torch that soared above the harbor for 100 years. (It was taken down in 1984 due to rainwater and other damage.)

You'll also find interactive kiosks where you are asked to reflect on what liberty means to you. Visitors’ answers, photos and national origins are compiled into a collective map that's displayed on a wide screen. A few tips for visiting

1. Buy your timed-entry tickets online before you go, preferably well in advance, to avoid lines (the e-tickets allow for priority boarding) and also because they sometimes sell out. The tickets include a self-guided audio tour of both the statue and the Ellis Island Immigration Museum.

2. Ferries leave Battery Park every 20 minutes. (You can also leave from Liberty State Park in New Jersey.) Leave yourself three to five hours for visiting the statue, the museum and Ellis Island.

4. Arrive early. Before boarding the ferry to either island, you'll need to go through airport-style screening. There's another security point before entering the statue, where you'll need to show a photo ID with a name matching the name on your ticket.

5. Leave your big bags at home or in your hotel. Large bags and backpacks aren't allowed.

6. If you can time your trip to a weekday, do so. It'll be far less crowded and more pleasant. It gets very packed on weekends.