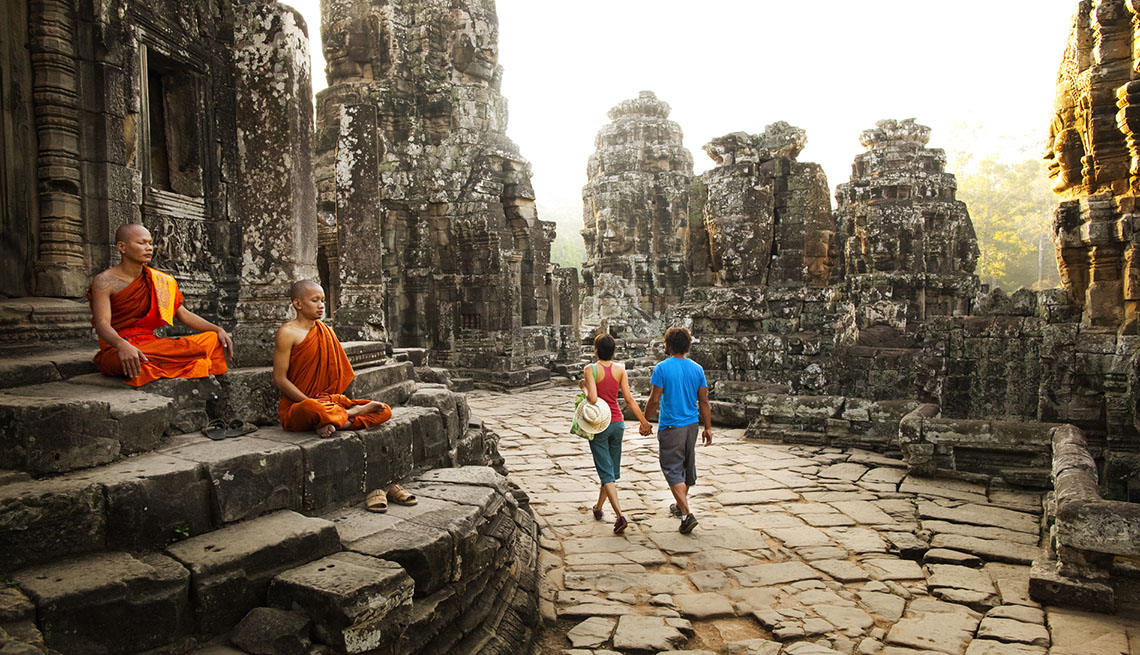 Your child-free home could be the ticket to your next life adventure. Once the kids are gone, as these families have learned, you’re free to find the gypsy-traveler in you.

It took four short months for Lynne and Tim Martin to decide to sell everything and “get the hell out of Dodge” once the last of their four kids had finally taken the exit to adulthood. The Martins traded their charming house in California’s wine country for a couple of 32-inch suitcases and took off to travel the world. Now, four years later, the Martins (Lynne is 74, Tim is 69) have lived in Mexico, Argentina, Turkey, France, Italy, England, Germany, Portugal, Ireland and Morocco—and they have no intention of ruining all the fun by putting down roots. “Being together all the time is a joy,” says Lynne. “We’re great companions!” In fact, the Martins wish they’d started their adventure sooner.

Now fully ensconced in their nomadic lifestyle, they’ve found that living on the road costs no more than living in a permanent house. “We have no property taxes, roof repairs or home insurance, so all of our spendable income is used to fund our new way of life,” says Lynne. “We do have small suitcases, an appetite for new experiences, good computers, and the savvy and flexibility to make ourselves at home in almost any situation.”  They apply the same no-frills approach to money matters: “We are certainly not wealthy,” says Lynne, “but this lifestyle does require some capital and a great deal of planning. We take a regular allowance from our investments and do not tamper with our nest egg. The goal is to be financially independent for the rest of our lives, so we live carefully.” If that means the occasional lumpy pillow in a less-than-stellar vacation rental, so be it.

The Martins (http://homefreeadventures.com/) are proof that life after kids is a wide-open proposition — a tabula rasa waiting to be etched with new and indelible experiences. While at least 36 percent of empty nesters plan on selling their existing homes and downsizing, others are taking a more radical approach by trading their brick-and-mortar base for the freedom to roam the world — gypsy-style. They go where they want, stay as long as they like, and move on when they’re ready. And, in the process, these pioneers have completely reinvented the meaning of “home.” They find purpose and passion, rekindle their romance, and even manage to impress skeptical children. See if any of these stories spark the wanderlust in you.

Go Where You Can Do the Most Good

In 2009, after the last of their four sons finished high school, Peta Kaplan, then 48, and Ben Sandzer-Bell, then 50, left their jobs as a visual artist and an aerospace strategist in Chicago and moved to Nicaragua to begin their epic journey. Smitten by the Central American country during an earlier trip, they’d already bought a dilapidated Colonial house, knowing they’d return once their nest had emptied. For the next, child-free chapter of their lives, they also knew they wanted to contribute to positive environmental change. Peta was already a committed environmentalist, but when she and Ben saw Al Gore’s documentary, An Inconvenient Truth, they decided to take action. In Nicaragua, they launched a forestry-based project growing sustainable bamboo. Not only did they successfully reduce the carbon footprint, their bamboo project supplied homes for low-income families and created over 150 jobs for local Nicaraguans. “We anchored our empty-nester experience around our vision for environmental and social impact,” says Ben.

Using Nicaragua as their home base, they explored the region—visiting the Dominican Republic, Guatemala, Cuba, Colombia, Panama, Ecuador and Mexico. Along the way, their four sons have shared in their parents’ new lives. “Each has his own set of interests,” says Peta, “and we try to accommodate their visions as part of our global trek.” Adds Ben, “Our youngest son’s a chef; [he met] us in Vietnam for a culinary discovery trip, which started with the three of us riding motorcycles for a week on Vietnam's Ho Chi Minh trail.” Throughout their myriad experiences, (which they’ve recorded at www.greenglobaltrek.com) Ben and Peta have learned to utilize each other’s distinct strengths and capabilities—and, in turn, to appreciate their differences. “Dealing with issues on the road has allowed us to learn to focus on the bigger picture,” says Ben.

A piece of that bigger picture turned out to be the devastation that followed Haiti’s 2011 earthquake. Ben and Peta spent two years applying their expertise with sustainable bamboo to the recovery efforts, visiting the ravaged country six times. In 2013 they transferred the bamboo business to local managers, rented out their house and left for Asia—the first of what Ben and Peta now call their “multiple nests,” spanning Indonesia, Thailand, Sri Lanka, Spain and Portugal, to name a few. In Laos they lived among Buddhist monks; in Bali they joined in spiritual village celebrations; and in Pushkar, India, they spent several weeks living on the shores of the holy city’s sacred lake. Their time in Asia underscored their philosophy of prioritizing life experiences over acquiring material objects. “Traveling extensively has only solidified our desire to spend as much time together as possible,” says Ben.

Go Where You’re Most Wanted

John Marshall was 47 and living in Maine when he experienced his own perfect storm: With his last child on her way to college, he lost his job and separated from his wife. Suddenly alone in his big four-story house with another New England winter bearing down, John decided he needed a change. He’d already spent a year traveling around the world to Costa Rica, Thailand, New Zealand, India and Tibet, with his wife, son and daughter. By volunteering as they went, they could travel for very little money. Once again feeling the urge to try new experiences, John decided to sell his house, store his belongings—including photographs, a piano, his bicycle and several Emmy statuettes won for his work as a TV producer/writer—and return to India, where he volunteered at an orphanage for six months.

His time there was transformational: “The kids I met were so full of life and joy,” says John. “And they poured their love into me every day as if I was the one who was empty. It was a humbling and life-changing experience.” And that was just the start. “I thought I was going to India to find a story, something to write about. But I was processing the end of parenthood. In a very real way, I was grieving, nostalgic for my time as a dad. The fact that I ended up at an orphanage, surrounded by every stage of the parenting process, from 4- to 24-year-olds, all day long, was the perfect transition for me, and a great reminder that the nest never really needs to be empty.”

John, who returned to the U.S. and is currently writing a book about his time at the orphanage, admits he has just one regret: not paying enough attention to his daughter. “If I had known exactly how the past year and a half was going to unfold, I would have communicated more with [her],” he says. Assuming she was happy and “doing her own thing” at school, John later discovered that she’d missed him much more than she’d let on. “By living at an Indian orphanage, I ironically made orphans of my own kids, which was never my intention,” he says. "Parenting, even after the nest is empty, is still a balancing act." Fortunately, the scales have tipped back in his favor; a father-daughter trip to India is scheduled for later this year.

Go Where the Only Plan Is No Plan

Veronica and David James were living on St. Croix in the U.S. Virgin Islands when the last of their three kids flew off to college. Some of us might have opted to stay in that tropical paradise, but the Jameses (then aged 45 and 49, respectively) knew they needed a change. Despite enjoying living and working in the Caribbean—Veronica was a Web designer, David a musician—they also missed having easy (and affordable) access to friends and family. In researching their options, a Google search of “empty nest” produced a giant ad for an Alzheimer’s patch. Veronica says, “We certainly didn’t feel ready for that! We had a lot of life left to live.”

So they sold their house, bought a used RV for $3,000 on eBay, and launched a road trip stateside. “Our original idea was that this would be a temporary transformation,” says Veronica. “See everybody we wanted to see, visit some of America’s great scenic and offbeat highlights, and then settle back down somewhere. We were looking at it as a victory lap for surviving the job of raising three kids.” When the couple shared their plans to free range the U.S. in an RV, their kids were skeptical. “Our son, upon seeing the motor home for the first time, announced: ‘You’re going to live in your car?!’ ” Ultimately, they all came around. “Our guess is that they saw it was working for us, that we were loving it—and that makes them happy.” One unanticipated benefit to being road warriors: Their kids have all become more adventurous and self-sufficient, two traits any parent would hope to instill in a kid. Now, three years later, with the old RV still rattling happily along, David and Veronica are firmly rooted in the gypsy lifestyle.

The couple created the website GypsyNester.com to keep friends, family and followers up to date; a newly released book, Going Gypsy, chronicles their pre- and post-empty nest experience. Like the Martins, they’ve found that not owning a house frees up money to pay for their adventures. They live frugally and are grateful that the investments they made earlier in their marriage paid off. Best of all, their new lifestyle has reignited their romance. “Initially we were so busy working out all of the details that there was no time for moping around and lamenting our empty nest,” they say. “Later we realized that the learning process we were engaged in—exploring new landscapes, cultures, foods, languages and customs—had brought us together in ways we’d never dreamed possible.”

Now it’s your turn: Take a page out of any of these stories and start writing your own. There’s no prescribed narrative: explore all your options, be open to the unexpected, and don’t underestimate your capabilities—or the adventurous spirit that lives inside of you. As varied and unique as these motivational stories are, every single one of our empty nesters had one common piece of advice: Don’t wait. Go for it—and go now! To up-and-coming empty nesters, Lynne Martin says, “Figure out what your real desires are and go for them. We all deserve to follow our hearts’ desires, and we only get one chance to live!”